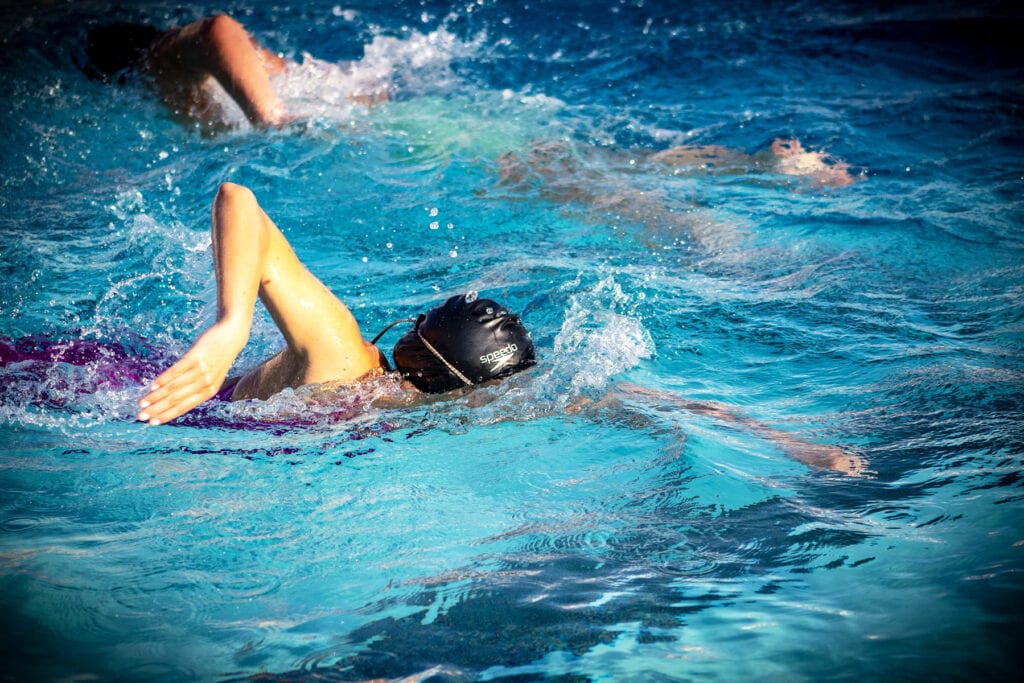 When you think about athletics at Escondido High School, swimming is not one of the sports that immediately comes to mind. However, that may be about to change.

Thanks to the emergence of an ascending sophomore named Riley Baldwin, Esco is now drawing notice in regards to aquatics.

On April 24 at the San Diego CIF Division I Swim Championships held at the Granite Hills High, Baldwin put on a most impressive display, twice earning a trip onto the coveted podium.

Her first stellar performance came in the 200 Free when she got off to a fast start and then hung tough throughout en route to a terrific second-place finish (1:53.24) that pushed eventual winner Emmy Luu (1:52.89) of Del Norte to the max.

But Baldwin was poised to put on another strong effort. Approximately 20 minutes after the 200 concluded, the 15-year-old Baldwin was back in the water ready to tackle the challenge of the stamina-testing 500 Free. Once more she delivered with a solid third-place finish that culminated with a clocking of 5:06.65. When asked how she was able succeed in the 500 after having already expended plenty of energy in her earlier event, Baldwin was quick to respond. “Well, I think my endurance is one of my real strengths,” she says, “and I had a game plan in my head as to how to pace myself until it became time for me to give it all that I had.”

To provide some background and context, Baldwin’s fascination with swimming began about eight years ago when she was either constantly in a neighbor’s pool or doing her share of stroking and frolicking at the beach. “I was in the water a lot,” she laughs, “and I just really loved it.”

Though Baldwin was involved with gymnastics and played softball until the eighth grade, she ultimately honed in on swimming when it became a year-round pursuit. And from there, things just seemed to take off. 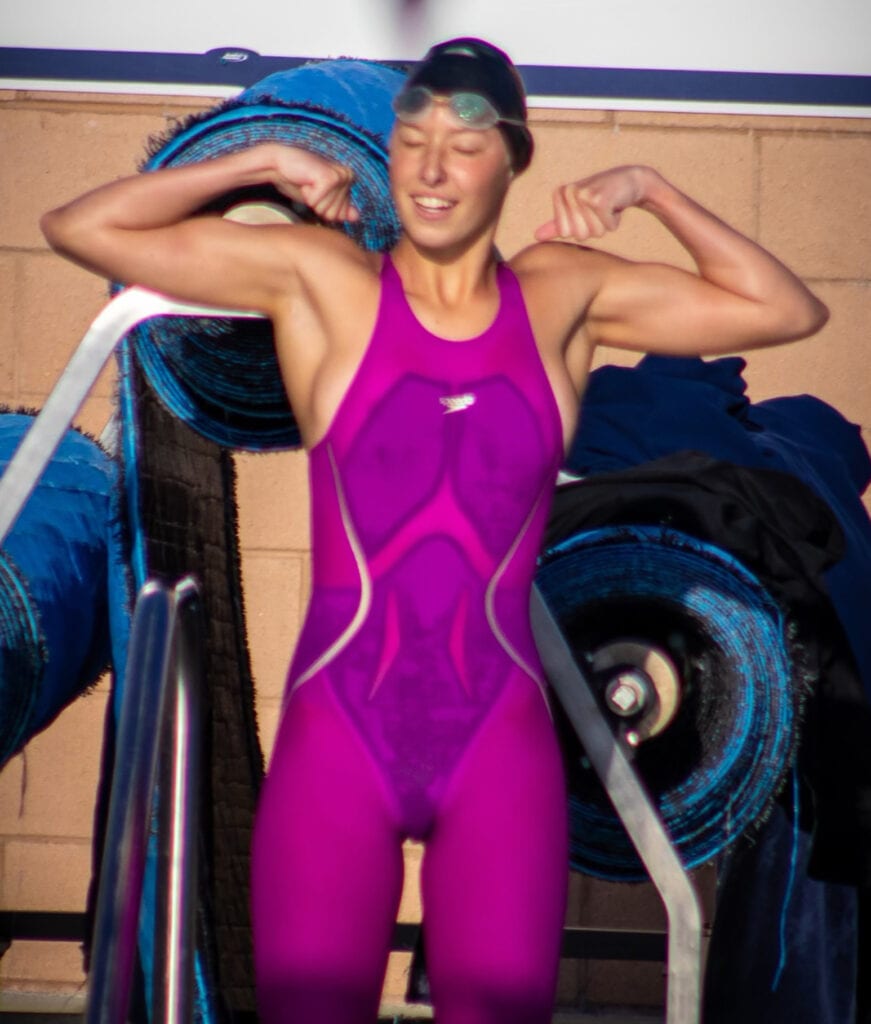 Fast forward to the present and her status as a swimmer of consequence is undeniable. But given her dogged dedication and determination, there appears to be a boatload of potential yet to be tapped. It’s hard not to envision an even brighter future for someone who can knife through the water and create her own share of waves.

And yet, she’s so damn good now. Currently, Baldwin ranks as the ninth best swimmer in her age group (15-18) for San Diego and Imperial Counties. Statewide, she’s rated at No. 62 which is quite a significant accomplishment when you factor in the countless number of fellow competitors she is being measured against.

What’s more, Baldwin is easily regarded as the top performer representing Renegade Aquatics, an Escondido-based swim club where she does most of her training and prep work.

Finally, there’s this factoid if any more proof of her proficiency is required. During the recent Escondido swim season which involved numerous dual meets, Baldwin finished first on every occasion but one which was a splashy achievement considering that in addition to the 200 and 500 Free, she also swam in other events like the 100 Fly, Breast and Back as well as the 200 IM (Individual Medley).

To say Baldwin takes her swimming seriously would be putting it mildly. The 5-8, 120-pounder is in the water about 320 days a year, with workouts generally in the two-hour range that cover about 7,000 yards. Though these sessions involve a mix of different elements, sprint sets and distance training are definitely points of emphasis.

And though Baldwin is highly motivated, she does admit that on those occasions when training becomes somewhat monotonous, she derives great incentive from her teammates, whether they be at Esco or with the Renegade contingent.  “I’ve got a great group of friends,” shares Riley, “and they really help me to work harder when I need to.”

As with other teenage athletes, the coronavirus definitely had an effect on Baldwin and her opportunities to train, let alone compete. For four months, her normal workout regime came to a complete stop. She was relegated to periodically using a neighbor’s pool or trekking west to Oceanside and unlimbering in the Pacific Ocean to stay somewhat sharp.

Prior to the prep swim season, Baldwin’s last chance to compete came in November of 2020 at the AZ Heat Southwest Territorial Classic held in Yuma, Arizona. There she gave signs of upcoming form when she finished fifth or better in seven different events with first (200 Free) and third-place (100 Free) showings leading the way.

As to what’s in the immediate offing, Baldwin will be participating in an upcoming Futures meet which could lead to the Junior Nationals if all goes extremely well. Beyond that, who knows? Though acknowledging that the road to someday making the Nationals or even the Olympic Trials is daunting, she doesn’t want to rule out those possibilities. “Oh yes, it’s really hard to get that far,” she admits, “but it’s something I’ve thought and dreamed about.”

Certainly if she continues on her current trajectory and adds to her growing resume at the high school level and various junior meets, she will be a hot commodity when it comes to college programs looking to fortify their rosters.

While the freestyle is probably the discipline where her smoothest technique and highest ceiling resides, Baldwin is nonetheless totally committed to making a mark elsewhere. Driven to add an all-round dimension to her swimming, don’t be surprised if in the near future Riley becomes a bona fide force in other areas like the breaststroke and butterfly where she has already posted some noteworthy efforts and exhibited real upside.

Baldwin readily points out that she never could have advanced this far without the support and encouragement of coaches, teammates and even opponents, who in the midst of competition have demonstrated an inspiring sportsmanship. And of course, her parents’ influence has been massive; including that of her dad Paul – Esco’s boys basketball coach – who helped spark her competitive juices and has “pushed me to always do my very best.”

So after having put Escondido swimming on the map, expect Baldwin to keep it there front and center for the next couple of years. After all, what else would you expect from a Cougar who’s taken to the water like it’s second nature?