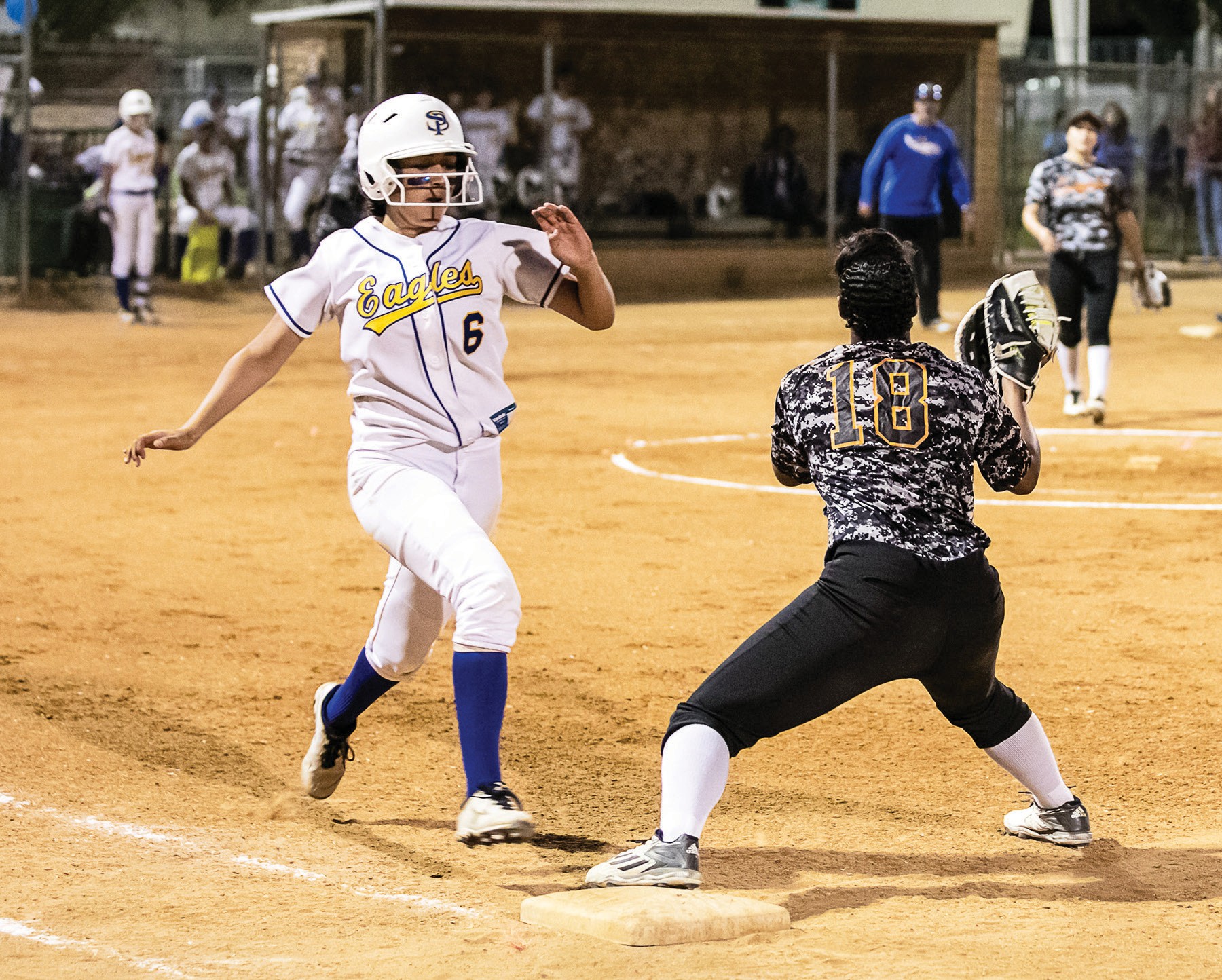 Escondido’s Xzarria Simmons (18), shown here in a regular-season game, was quite busy against Calexico, handling 13 total chances as well as delivering one of the six Cougar hits.

For nine innings on Saturday, Escondido’s starting pitcher Victoria Cervantes was strutting her stuff, shutting out the opposition and clearly holding down the fort.

All that was needed for this heroic effort to be justifiably rewarded was for the Cougar offense to lend her just a wee bit of support in the form of but a single run. Who could have blamed Cervantes if she might have internally channeled Shakespeare and thought, “a run, a run, my kingdom for a run.”

Alas, one was never forthcoming.

And when Cervantes finally did yield a score to visiting Calexico in the top of the tenth, —although it was unearned and hardly her fault—not only was her splendid effort spoiled but the Cougars were saddled with frustrating 1-0 loss in second-round Division II CIF playoff action. As a result, the highly regarded Cougars saw their road to a championship made more problematic, while suffering only their eighth setback in 31 overall decisions. This certainly was not the outcome that the ambitious Cougars had envisioned. There was a definite sense of letdown in the aftermath of the defeat.

The Calexico game will be revisited momentarily but some necessary set-up is required to provide adequate background to that defining contest.

The Lady Cougars entered the postseason as the No. 1 seed and as such weren’t required to participate in the play-in round. In first-round play, Escondido was matched up against a familiar foe, Del Norte, a team it had twice dispatched earlier in the season. Well, make that three, although the latest success over the Nighthawks didn’t exactly come easy. This was no cakewalk.

By thanks to a solid seven-inning outing by Cervantes (two earned runs) and a pair of RBIs from powerful Xzarria Simmons and one apiece from Alyssa Howard and Cervantes herself, the Cougars secured a clutch 4-3 win which enabled them to advance and move on.

Next up were the Bulldogs from Imperial County, possessors of a 20-8 record and on an undeniable roll, winners of nine of 11. Even more ominously, Calexico had proven to be stingier than Scrooge when it came to giving up runs, having allowed a staggeringly low total of four in their past nine contests. Much of this remarkable run prevention had been the handiwork of senior right-hander Kasey Cazares, who had been tossing shutouts with ridiculous frequency, having already thrown 11 before even April was out. This was one formidable hurler who was perfectly capable of going into lockdown mode at anytime. On the surface, it looked like EH would be tested to the max.

But given the fact that the Cougars were the higher seed and had the comfort/advantage of playing on their own home turf, EH still rated as a favorite coming in. And yet, knowing that Cervantes and Cazares would be going head-to-head with so much at stake, the 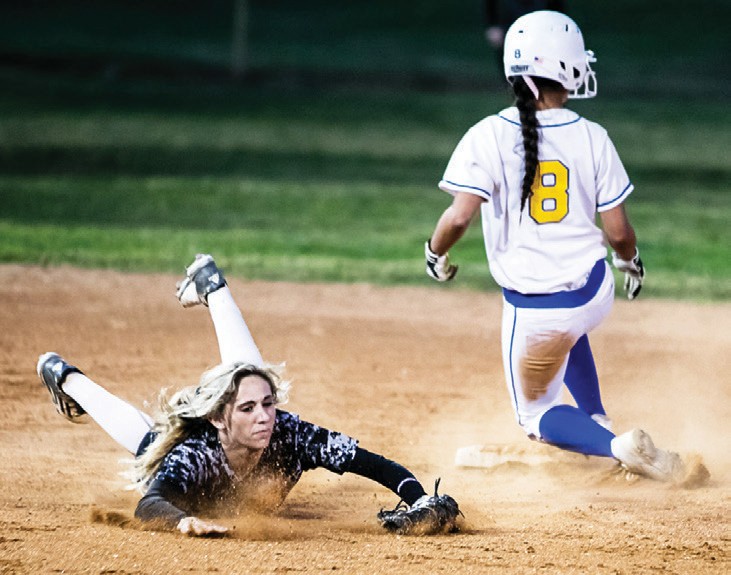 Kayla Krantz, slick with the glove, got aboard twice against Calexico via a single and walk.

likelihood of a low-scoring affair seemed almost a certainty. Unless something completely unforeseen took place, runs figured to be scarce and hard to come by. And to virtually no one’s surprise, that’s exactly how the proceedings played out.

Goose egg after goose egg kept being put up on the scoreboard. Zeroes became a reoccurring theme.

But finally, in the top of the tenth with one out, Calexico managed to load the bases, which set the stage for a decisive breakthrough. Cervantes induced a come-backer and quickly got a force at the plate but then a throw to first, in quest of a double play, went array and just like that this riveting pitcher’s duel was lost.

Cervantes had more than done her part, going 10 gallant innings, giving up just five hits while striking out six. But as stellar as she had been, Cazares shone even brighter. Registering an astounding 19 strikeouts and fanning everyone in the Cougar lineup with the exception of senior shortstop Kayla Krantz, Cazares generally had her way and was at times, truly dominant.

The Cougar offense wasn’t thoroughly stifled, however. Alexza Sanchez and the dependable Grace Finn delivered two hits apiece while Simmons and Krantz also managed to reach Cazares for a hit. Cazares also issued a pair of walks. But when she needed to get the big out, the Calexico righty was money personified.

“It was basically a game of give and take, good defensive play and one that was pretty well played throughout,” said Escondido coach Cary Weiler of the tight contest. And Weiler graciously tipped his cap to the outstanding work of Cazares. “She made plenty of quality pitches and really came through in the clutch.”

Though not minimizing the disappointment of the setback, Weiler feels that his team is fully capable of rebounding and getting back into the title chase. The coach welcomes the fact that the double-elimination format has given his talented club another opportunity to prove itself.

That chance will come on Tuesday afternoon against a Santana High team that stayed alive with a 15-5 conquest of Valley Center. Once more, the Cougars will occupy their home field, a place where they’ve established a notable 10-4 record. And once again, it will be the reliable Cervantes taking the hill and looking to provide her side with another quality performance.

Those are two pretty good pluses to start with, so don’t be at all surprised if EH can parlay them into the genesis a championship push.

And should that happen, there’s always the chance that the Cougars could once again cross paths with Calexico and its standout Cazares. Despite her brilliance and superb skills, you get the distinct feeling that the Cougars would relish getting another crack at the hurler who got the best of them by the narrowest of margins. What a rematch that could prove to be!