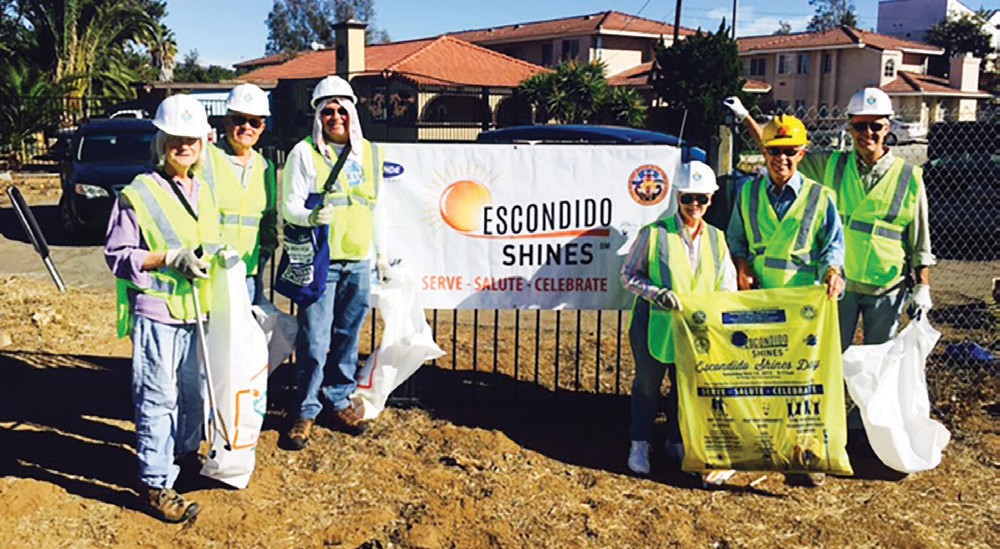 A week ago on Saturday the Rotary club of Escondido performed their cleanup activity on the interstate 78 freeway at City Center, Parkway interchange. This is their new service project where they have made an ongoing commitment to maintain this freeway section. This was organized by Larry Trautner.

It’s a bright yellow plastic bag bigger than a grocery bag, but smaller than your typical trash bag. It’s a well-traveled bag — at least within the confines of the Hidden Valley. It’s a bag whose highest purpose is community service. It’s the Escondido Shines bag.

A patent attorney for many years, with several patents of his own, it’s not surprising that Vaughn North is what you might call “an idea man.” One day he came up with a simple idea for encouraging pride in Escondido — an idea that has grown in just a few years into a very big idea.

The big idea was “Serve, Salute and Celebrate,” and, as with a lot of good ideas that need some assistance, it got a big boost from the local Rotary Club.

In enunciating the mission of “Escondido Shines,” North puts it this way, “Are you making a difference in Escondido? Each person can contribute to community pride and unity. It begins with an attitude and is expressed in action. It starts at home and spreads through the community as you serve others, join together and build brotherhood.”

Escondido Shines covers four broad categories (this can all be found on their website: www.escondidoshines.org): Youth, Beautification, “Family” Relationships, and Gratitude which are tied to the seasons:

Youth: (Winter) Instilling in our youth a sense of community pride, self-worth, and willingness to serve.

Beautification: (Spring) The appearances of our homes, businesses and community are visible indicators of individual and community pride.

Family Relationships: (Summer) A focus on individual families, that also includes the “extended”

Vaughn North proudly displays the “Escondido Shines” bag that he would like to see in every nook and corner of Escondido, wherever good works, especially of the civic virtue kind, are being performed.

family of neighbors, co-workers, churches, clubs, etc. A kind and friendly community is a powerful force that can energize virtually every aspect of community life.

Gratitude: (Fall) Raise self-esteem and create a foundation for trust and respect necessary to perpetuate our positive choices and create an expectation of success.

Some upcoming Escondido Shinesrelated events include:

When he and his wife Myrna lived in Sandy, Utah, a suburb of Salt Lake City, North noticed that in spite of being a good place to live, “It had a terrible community image.” North decided to do what he could to improve that image. He helped found Sandy Pride, which brought together various community groups to put on Sandy Pride Day.

North ran the program for three years. The city of Sandy won Utah’s Community of the Year award and It has continued to maintain its positive image since.

A well-known emblem of Sandy Pride Day was the “pride bags.” When North moved to Escondido he saw a similar need in his new home and adapted the Sandy Pride bags to become the Shines Bag. “When we moved here people said Escondido had an image problem and so I said ‘Let’s do the same thing here that we did in Sandy.’ ”

The Rotary club of Escondido agreed to fund this effort. For the first year they ordered 30,000 bags, and paid for enough literature, signs, 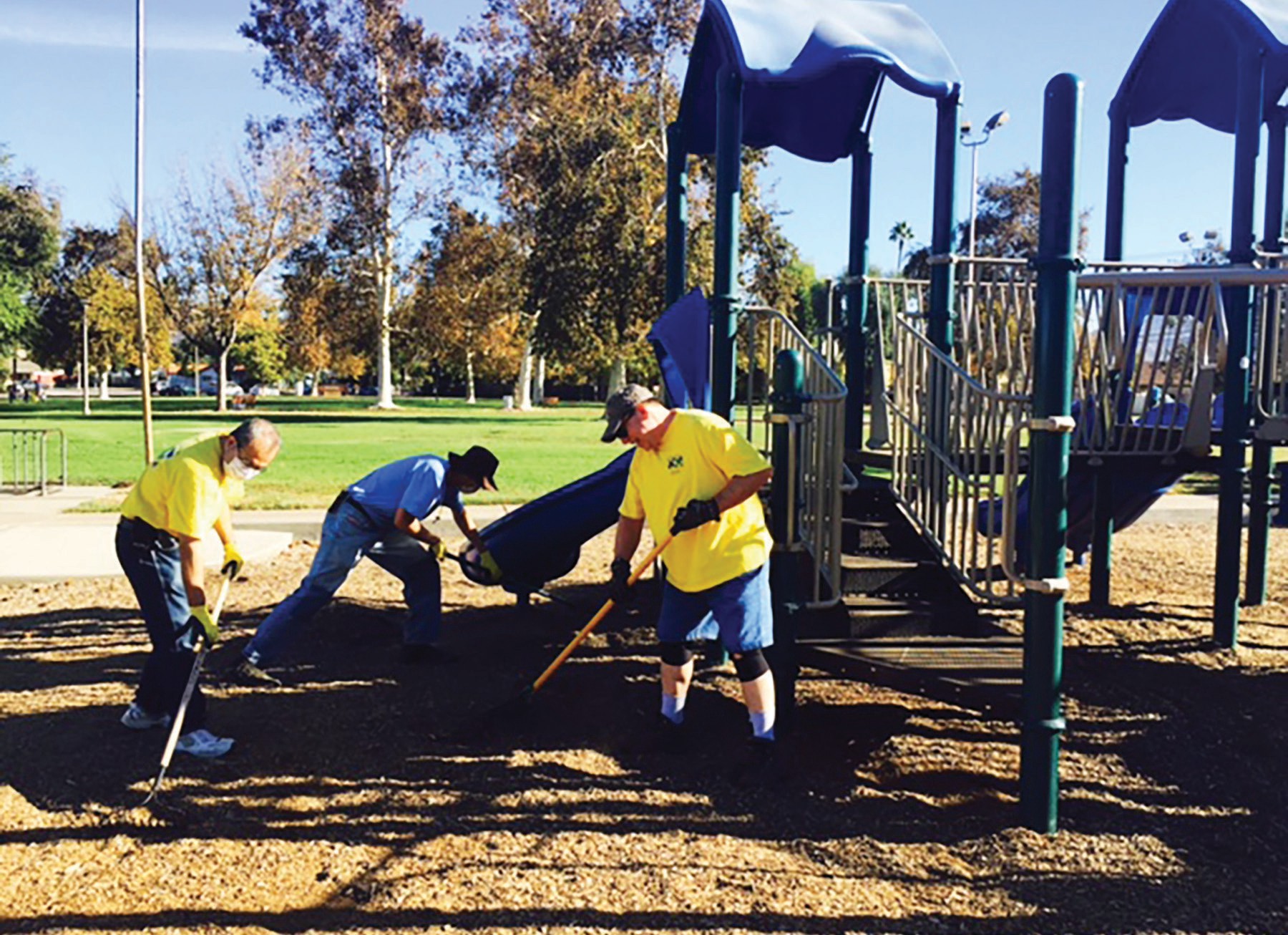 wrist bands and brochures to last for several years.

Although North originated the idea of Escondido Shines, the credit for the name goes to councilmember Olga Diaz. “Vaughn thought of the concept but I suggested the name and it got approved by a committee of Rotarians,” she recalls.

Last year North approached Alex MacLachlan of the Downtown Business Association and suggested, “Why not let us help you promote the Tamale Festival?”

MacLachlan recalls: “Vaughn and I were introduced by Olga Diaz last year when she realized we had both of our events scheduled on the same date. We met and discussed our visions for the two efforts and realized our sense of community and ideas of having constructive influences and examples for Escondido’s youth were very similar.

“We decided to combine efforts on that Fall day last year, where Escondido Shines conducted neighborhood cleanup efforts that were sanctioned through the Elementary School District head. Local elementary school kids were led by former Marines (I think) in their neighborhood cleanup on the morning of the Escondido Tamale Festival, and then moved over to Grape Day Park to join the festivities and help clean up around the park,” said MacLachlan.

“We are lucky to have him in Escondido bringing his spirit through Escondido Shines and his noon time Rotary Club work, and the Escondido Tamale Festival is better off for when he and his volunteer youth squad bring their community spirit on November 5 in Grape Day Park,” said MacLachlan.

That first tamale festival in 2015 was so successful that they ran out of tamales! Note: MacLachlan assures the Times-Advocate that won’t be an issue this year.