‘Escondido Shines’ cleans up the city 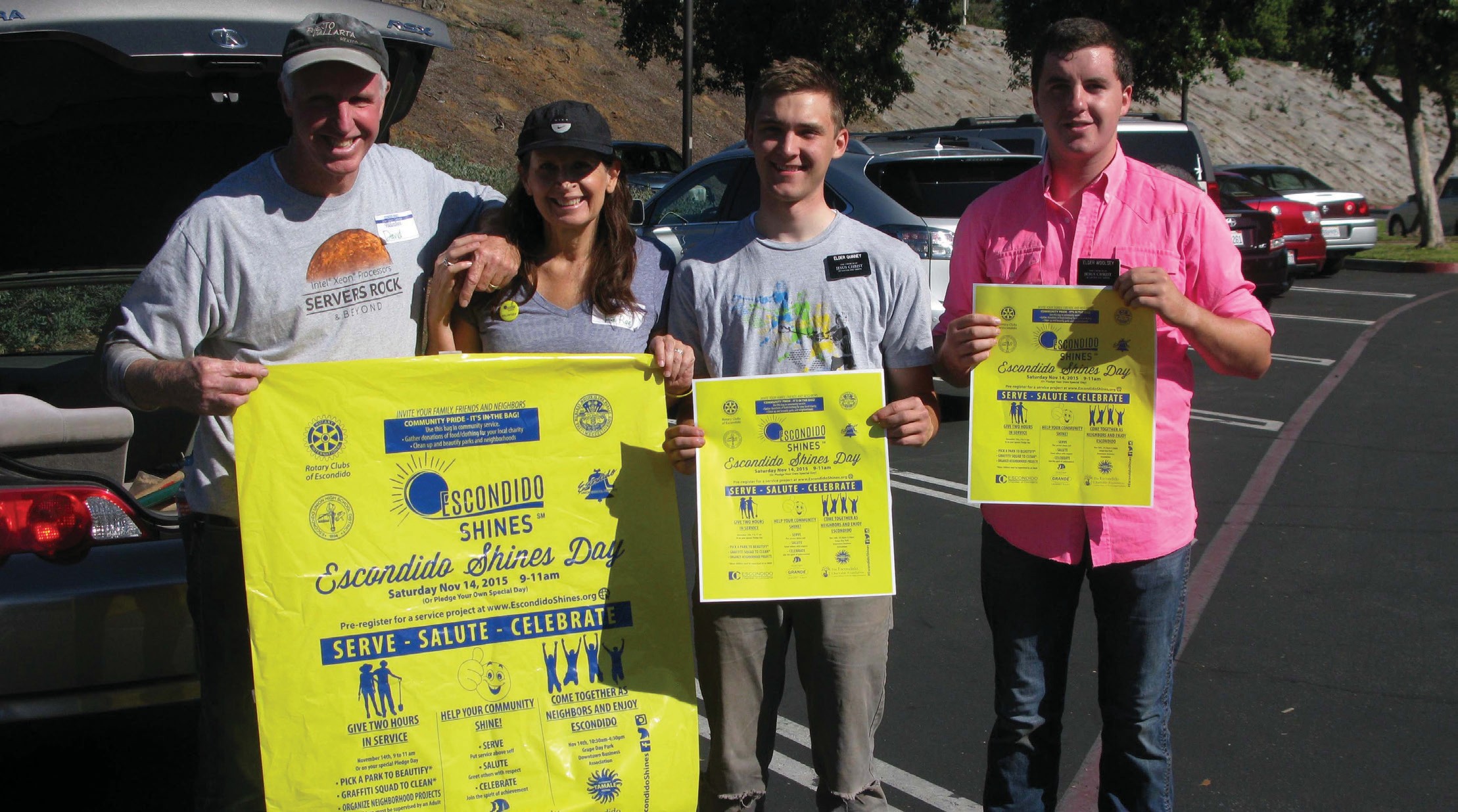 The culmination of a year’s effort in creating community pride and esteem was rewarded last Saturday in 10 of Escondido’s civic parks.

According to president and founder of the Escondido Shines movement, Vaughn North, “It exceeded my expec­tations. We had about 600 volunteers throughout the community. We covered the city’s parks. There were 24 projects and we had a great time.”

The Rotary Club-sponsored event invited participants to join crews for painting, gardening, mulching and tree- trimming. Supported by the city’s Pub­lic Works Department, they attacked on all these fronts and hacked through underbrush in Kit Carson Park’s “pan­handle,” which had suffered neglect for a number of years.

The Public Works officials had to send out more city workers than ex­pected to help the large number of par­ticipants.

About half of the clean-up crews were school-age, but members of Ma­rine veterans groups participated wear­ing bright orange shirts.

“We had a great cross-section of stu­dents led by teachers from the schools. We had families joining. There were many from 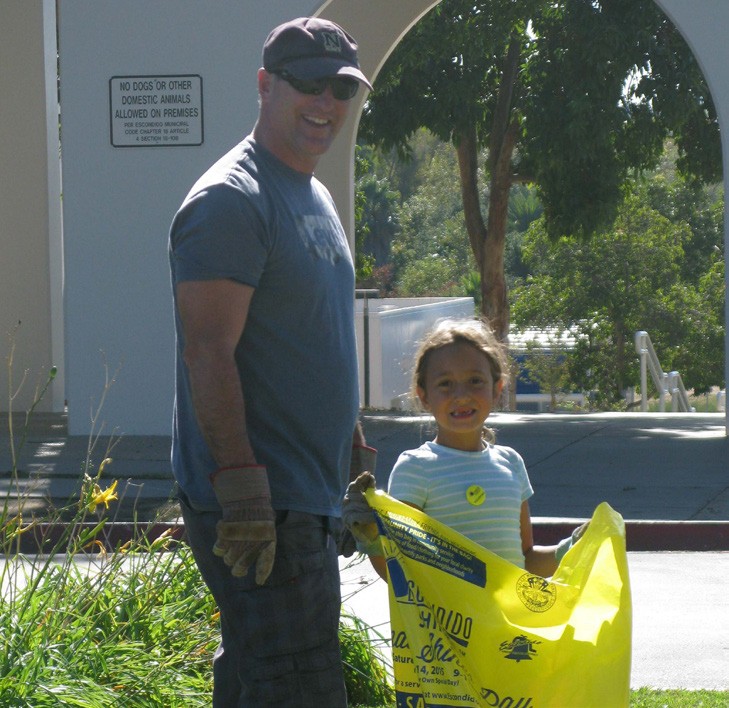 Mark Cappelletti and his daughter Gianna pick up litter on Amphitheatre Drive at Kit Carson Park. The event drew 600 participants to 10 Escon­dido parks.

churches. There were a lot of individuals who came because they just love this community,” North said.

To prepare for the cleanup, the organi­zation raised funds to send out 30,000 yel­low trash bags, 25,000 of which went to schools, public and private.

“A number of the church schools really turned out to not only distribute the bags but encouraged many people to partici­pate.” he said.

“As you know, it’s hard to get people on Saturday morning. You have to compete with soccer games, baseball games, church activities and just travel and all the things people do,” he added.

“Mountains of trash bags” piled up in the parks, according to North.

“We had such good participation. I think it’s just a tribute to the community here.”

More than 100 people, most of them La­tinos, turned up at Washington Park with paint brushes, rollers and scrapers.

“They painted the rec center there,” North said. “When I drove up I saw about 20 people standing along this cinderblock wall, little ones painting below and older ones 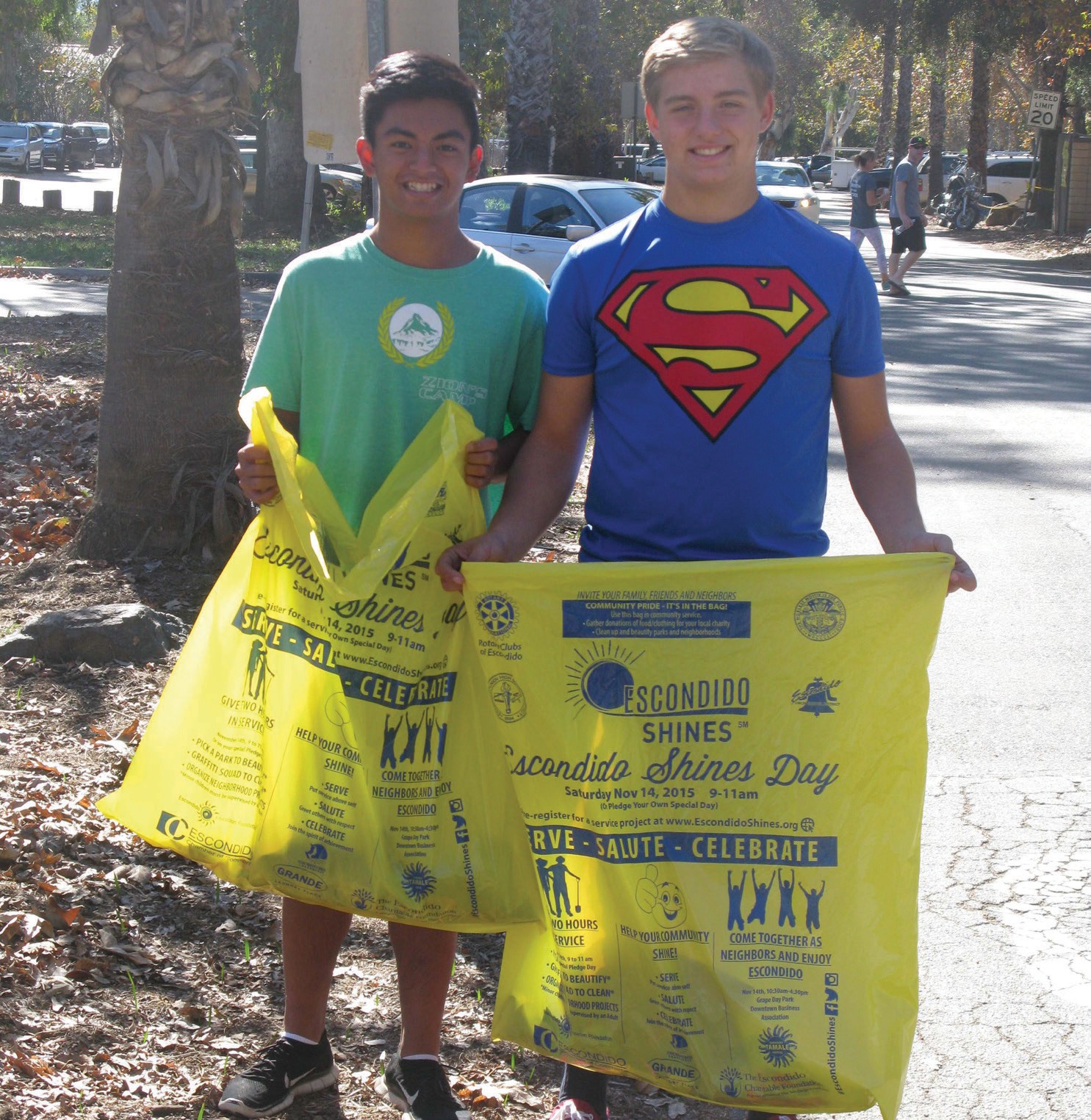 above them painting the wall and it was a real treat to see everybody working shoulder to shoulder.”

The movement started this year in Febru­ary with Youth Week in the schools. Mem­bers of the organization passed out yellow Escondido Shines wrist bands. Children were encouraged to write poems, essays and stories about their community to be shared on the escondidoshines.org website.

The program also taught three core practices under the slogan, Serve, Salute and Celebrate. North said the idea is to serve by combatting litter and by partici­pation in the community, to salute people by greeting them politely and with respect and to celebrate by attending community events and having fun.

Escondido Shines celebrated in April with its first cleanup and gathering in April. Last summer five free concerts at the Ampitheater in Kit Carson Park were sponsored.

Saturday’s event ended with a gather­ing in Grape Day Park in celebration with the also-new Escondido Tamale Festival. Escondido Shines will start work with the next crop of students in the winter months, North said.