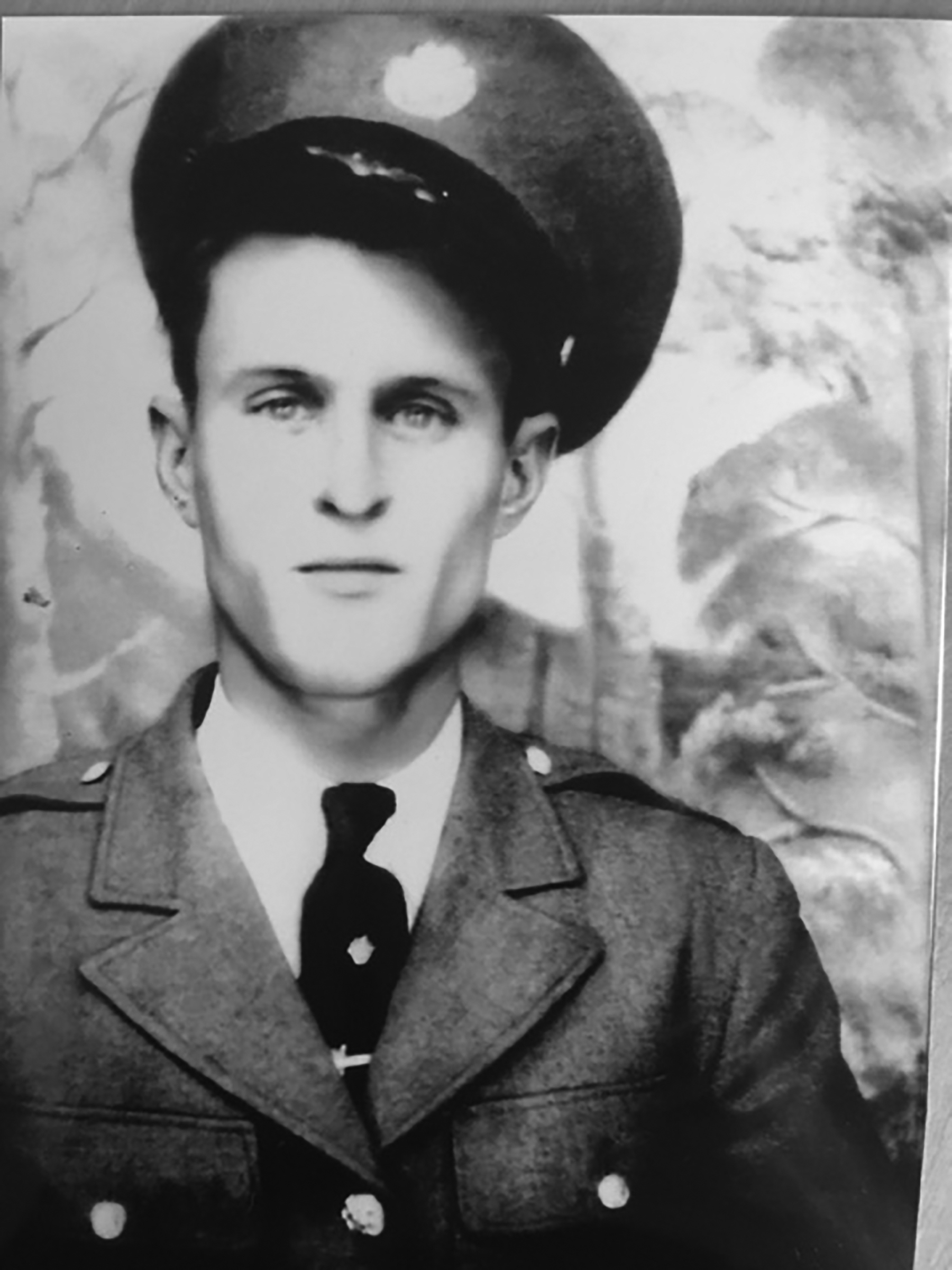 Allen P. Robichaux, whose Escondido family members will be traveling to France in September to honor his memory and his service. 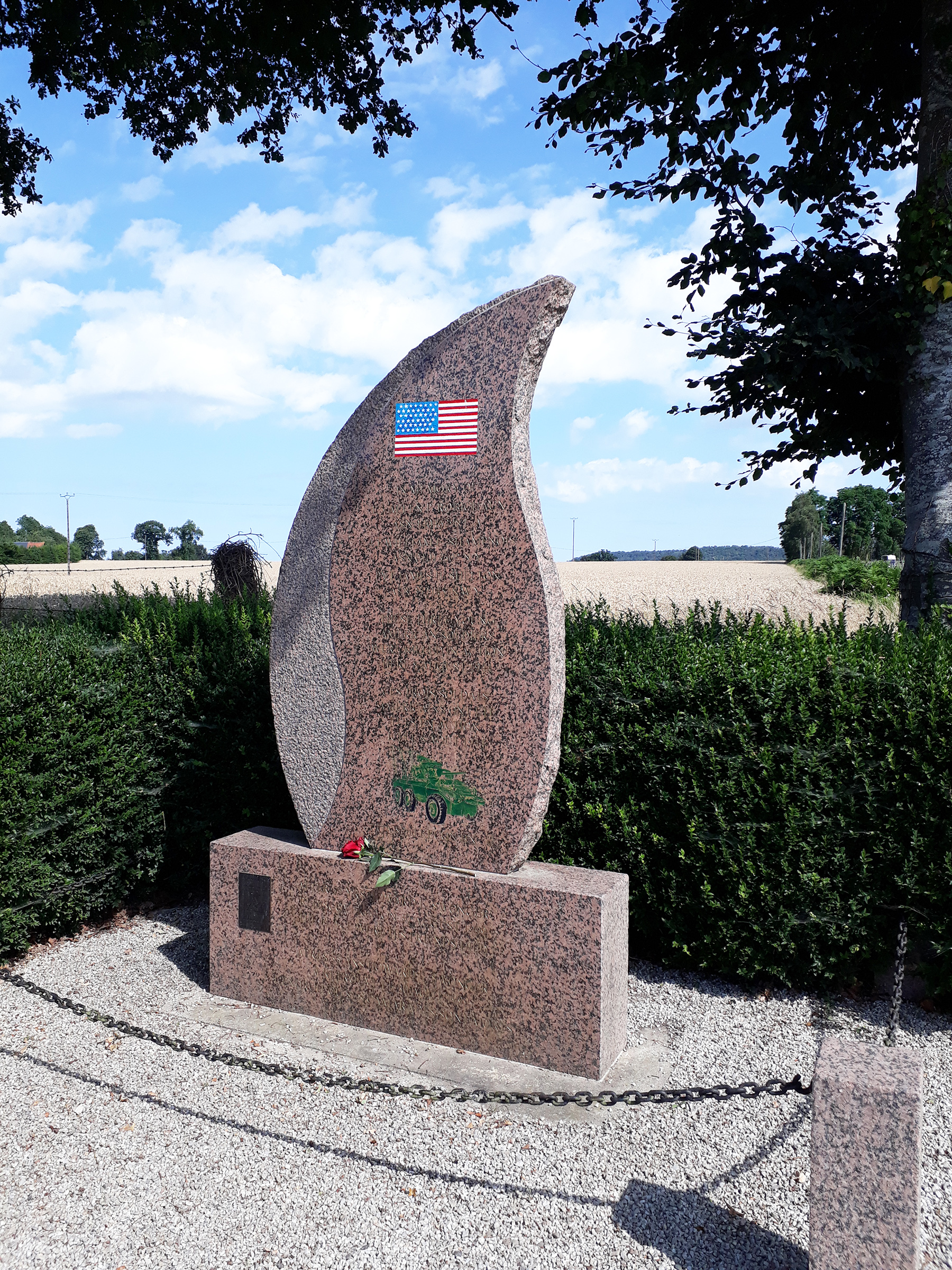 Memorial to American soldiers at the entrance to the village of Saint Georges de Rouelley. 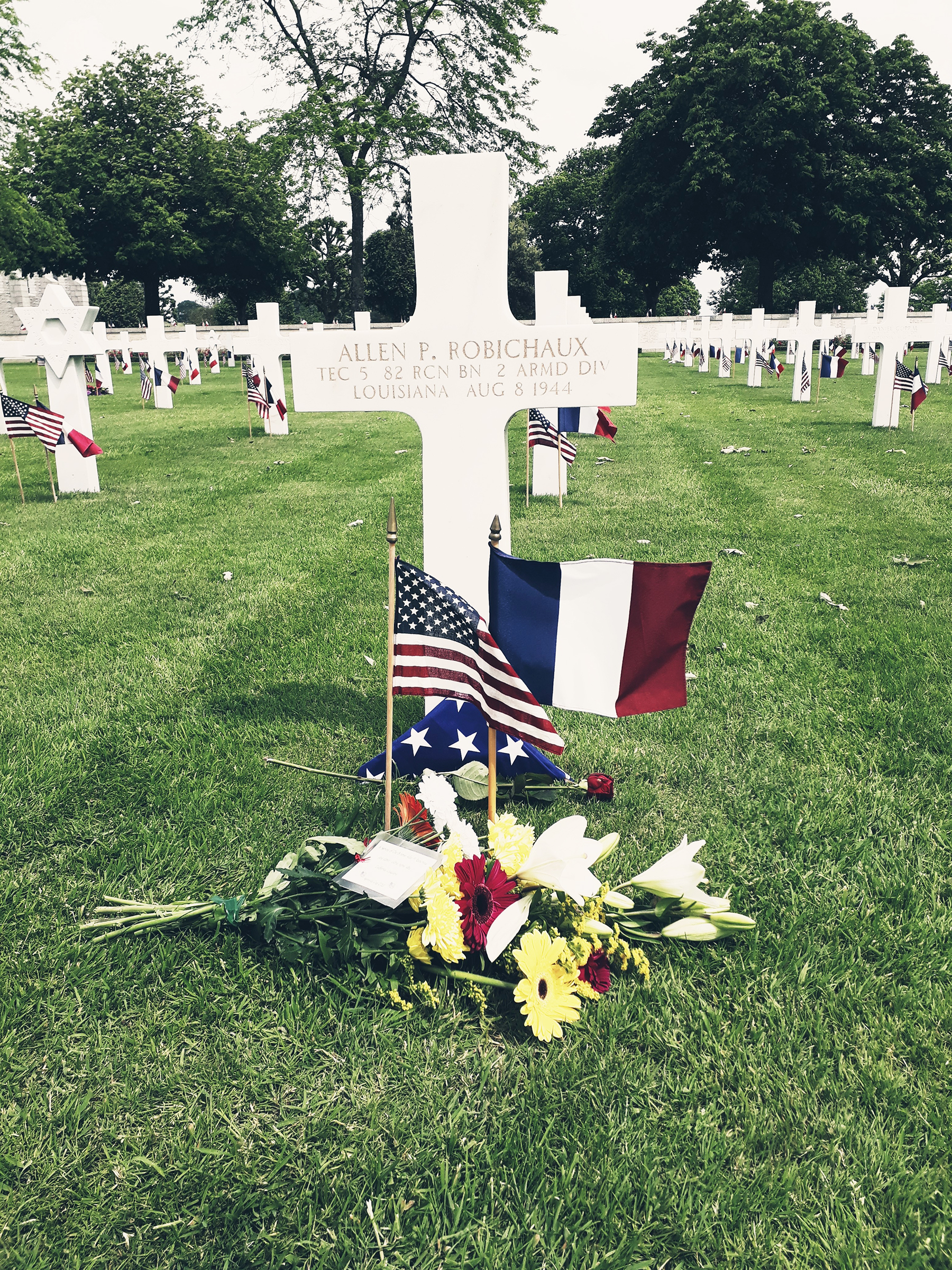 Gravesite of Allen P. Robichaux, an American G.I. who fell in France in 1944. Photo by Jean-Jacques Morel

A French history buff is helping Escondido residents reconnect with the history of a relative who fell in Normandy, France in 1944 after the D-Day invasion to liberate Europe.  They will be attending a D-Day/World War II memorial service for their uncle in Normandy.

French resident Jean-Jacques, a WWII history buff is helping Escondido residents Mike Schelley and his daughters reconnect with the history of their uncle and great-uncle by organizing a memorial ceremony in September in the town where he fell in France.

Jean-Jacques Morel is an avid amateur historian who specializes in the Invasion of Normandy. He uncovers the lost stories of American soldiers killed in Normandy in 1944.

According to American writer/journalist Mary Margaret Chappell, who formerly was the food editor of Vegetarian Times magazine, “Mr. Morel, a Frenchman living in Brittany has formed a close bond with a family in Escondido —Mike Schelley and his daughters–and will be hosting them as they visit their uncle’s tomb in the WWII American cemetery in Normandy, France. Last year, he accompanied one of the soldier’s nieces to the cemetery — she and her family live in Paso Robles.”

Morel contacted Chappell because he wanted to get the story out of both the family’s journeys to Normandy and the ceremony he is putting together. The ceremony will be held September 5, at the monument in the town where Allen Robicheaux (the soldier) fell two months to the day after gliding into Normandy on D-Day.

Morel wrote Chappell: “My name is Jean-Jacques Morel, I am French. I live in Rennes (Brittany), France. I am a project manager.

“I am in contact since the first August 2017 with Mrs. Silver Claire from Paso Robles (California) because her uncle is buried in the Brittany American cemetery in Saint-James Normandie (WWII Cemetery). We went all together last summer holiday in this place to honor the grave of this soldier whose name was Allen P. Robichaux (Service/Serial # 14046298). We continued to communicate. In December I went to the cemetery and organized a video call with all the member of this family! You must know Allen has got three sisters who are still alive: Wilma (Claire’s mother), Mahe (Mike Schelley’s mother) from California and Nita from Louisiana. They are more 90 years old now! It was a beautiful moment, I was very happy to have been able to show them their brother’s cross! A lot of emotion!”

For Memorial Day Morel went to the place where Robichaux died, at the entrance to the village of Saint Georges de Rouelley where a monument was set up in the early 2000s.

Morel writes: “I met the mayor and his two elected representatives the day of Memorial Day! We plan a ceremony the fifth of September 2018 because Mr. Schelley Mike (Allen’s Nephew) and his two daughters will come in France to honor Allen’s memory!”

Morel added, “I thought it could be interesting to have an American journalist by our side the 5th of September 2018 to make a report for Wilma, Mahe and Nita! In memory of their brother!”

The mayor will invite guests from the American Consulate of Rennes and local residents. Morel wrote: “I must tell you something Mr. Mayor of Saint Georges de Rouelley was six years old when Allen died and he remembers this day! He heard the noise of the fight! Allen’s section had established its camp in his parents’ farm. An incredible story!”

June 5, 2019 will mark the 75th anniversary of the D-Day invasion. Robichaux died on August 8 at Beau Soleil in Saint George de Rouelley during a reconnaissance patrol. He was a Louisiana-born man who served with the 82nd Recon Battalion of the 2nd Armored Division.

More on the “D-Day Dectective”

LaLay begins the piece: “Jean-Jacques Morel is an avid amateur historian who specializes in the Invasion of Normandy. He uncovers the lost stories of American soldiers killed in Normandy in 1944.”

He continues: “Wednesday, September 5, Mike Schelley and his two daughters, Rachael and Lauren, will travel Normandy to visit the grave of their uncle and great-uncle. Allen P. Robichaux was killed on August 8 in Saint Georges de Rouelley and buried in the Brittany American Cemetery in Saint James, not far from the Mont-Saint-Michel. A representative from the American Consulate in Rennes will participate in the ceremony.

“On August 8, 1944, 26-year-old Allen Robichaux was on a reconnaissance mission along with two fellow soldiers. Their armored vehicle—an M-8 Scout Car—was attacked by the Germans while crossing a field and the three Americans were killed in action. A monument was erected in memory of the incident at Beau-Soleil, a small crossroads between Barenton and Saint Georges de Rouelley.

“One man is responsible for the memorial service to be held on September 5th: WWII history buff Jean-Jacques Morel, a fortysomething consultant who lives in Thorigné-Fouillard near Rennes (Ille et Vilaine).”

He quotes Morel:  “In the early 2000’s, I was often in the area of the Brittany American Cemetery for work. In 2006, I decided to choose a grave at random to honor the memory of a fallen soldier and also look into his history.” Morel continues: “His name was William Kington Heeler, and he died on August 9, 1944. A few years later, I met someone who organized trips for Americans traveling in Normandy and last year, he asked me if I wanted to accompany him on a tour he was giving for clients who were coming to visit their uncle’s grave. That soldier was Allen P. Robichaux.”

This began Morel’s close relationship with the fallen G.I.’s family. “Morel then got in touch with the mayor of St Georges de Rouelley who himself had childhood memories of the attack on August 8, 1944, which took place near his family farm.”

He quotes Morel: “Allen Robichaux’s three sisters are still living in the US. I set up a videoconference between them and the mayor and it was simply incredible. Now, when I visit their brother’s grave, I contact them by video because they are too old to make the trip to France themselves.”