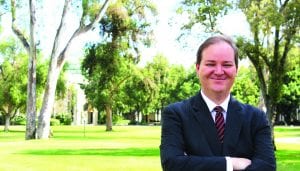 Speaking to the gathered club, Carr spoke of growing up in the district and laid out his plans once in office, including working on California’s Cap and Trade System and our healthcare needs.

“We live in extraordinary times; and I think that the challenges we face need new solutions,” Eric said during his remarks to the Escondido Democratic Club. “I think that together we can make a difference. So, I look forward to earning your support, your trust, and your vote.”

Carr has been active in the Escondido political community, working with local politicians to prevent the outsourcing of Escondido’s Library functions. Since announcing his candidacy,  Carr has been travelling the 75th District, and speaking with supporters in Escondido, San Marcos, Fallbrook, and Valley Center.