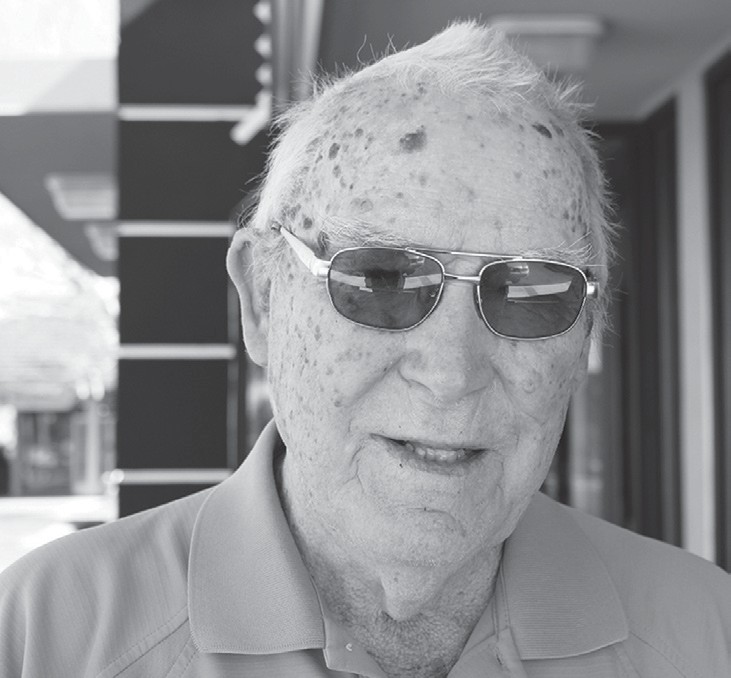 Before its demise, the former Daily Times-Advocate, with which I was affiliated for 27 years, was located in three different sites in downtown Escondido – from 237 E. Grand Avenue to 226 E. Ohio Avenue (now Valley Parkway), to 207 E. Pennsylvania Avenue.

It all started out for me August 1952 at the Grand avenue location between Juniper and Kalmia streets in a building now occupied by the Burger Bench. I can’t imagine a customer there today munching on a hamburger and knowing that at one time there was a newspaper printing press humming away just a few feet away from that dining room. Over the years, the location has been home to a variety of businesses, which included a stock brokerage firm and the F Street Bookstore.

But in 1952, the front of that building housed eight of us representing four different departments. I was at that location only about one year before the T-A’s owners, Fred Speers and Bert McClintock, had had constructed a new and what was then a more modern, one-story newspaper production plant, build specifically to house a newspaper building, at 226 E. Ohio Avenue.

If you’ve ever moved into a new home, you know that feeling of excitement and anticipation. That was my feeling “moving up” that long ago day in 1953. Those of us with that old T-A group occupied that building for almost 18 years in what were near unworkable conditions in the later years of the occupancy. We had simply outgrown the Ohio Avenue location. We had too many employees to function efficiently.

In the newsroom, it was like 15 rats jammed into a shoe box that had room for 10. We literally had one situation where a couple of staff members had to move a wastebasket before they could squeeze out of their chairs. The advertising departments, both retail and classified, needed more space. Circulation department employees were in different parts of the building because there wasn’t enough room in their main department.

During that more than 17 years on Ohio Avenue we underwent a few interior changes caused by employee growth. Our two-man sports staff was moved down a hallway to take over what had been a small semi-enclosed area used by the retail advertising staff. Retail advertising had been moved into the central portion of that building that had been a job-printing shop (which was eliminated). The office that was the circulation department originally had been the newspaper boys’ room, where they folded their papers before starting on their routes.

The company in 1953 figured the Ohio Avenue location would be adequate for our operation up toe 25,000 circulation. They missed the mark! Here it was 1971, almost 18 years later, and our circulation was only 21,000, and we had about 120 fulltime employees.

But then came the big move in February of 1971, the really big move to 207 E. Pennsylvania Avenue, a modern two-story newspaper plant that was like the Taj Mahal compared with the Ohio Avenue location. That new building housed its news department, retail advertising and classified advertising departments on the Pennsylvania

Avenue side first floor, with the production department on the opposite side. On the second floor were the publisher’s offices, a staff meeting room, the accounting department and an employee lounge.

Before the plans for that building were finalized, the then owner and publisher of the T-A, Carl Appleby (whose family had purchased the company in 1965), and his department heads visited a few up–to-date newspapers, including the Los Angeles Times and the south Bay Daily Breeze (in Torrance), to get ideas about then modern newspaper production techniques.

For me, the T-A came to an end in 1979 when I resigned, knowing finally that I was incompatible with the new management provided by the Tribune Co. of Chicago, to which Appleby had sold in 1977. It was several years later that the Daily T-A “died,” being sold by the Tribune Co. to Howard Publications, which merged the T-A with the Oceanside Blade-Tribune to become the North County Times.

Newspaper production on Pennsylvania Avenue finally came to a total ending when that location was closed after the North County Times was bought by the San Diego Union-Tribune. And then it all came full circle when the Union-Tribune was bought by the Los Angeles Times, which is owned by the Tribune Co. of Chicago!!

When the old Talone meat packing plant was razed by fire a few weeks ago (June 30), it jogged a memory of the first time I visited the place. But not as a customer. My wife and I didn’t shop there for our meats, we lived in another section of town, too far to make it convenient for a trip to Talone’s.

No, this was at a time long ago; some 60 years, in fact. I was a young reporter at the former Daily Times- Advocate in the early 1950’s. Talone’s was one of the accounts of Hoyt Smithers, one of the T-A’s advertising representatives. One day, he was on his way to Talone’s to pick up an advertisement and asked if I wanted to tag along, indicating that I was in for an experience. (Talone’s was over on Hale Avenue, about two miles from the T-A’s downtown location.)

I have to believe that most people who drive by Talone’s or shopped at it’s butcher shop for their meats had no idea what transpired in the rear of the building. That’s where Hoyt had permission from Talone’s management that day to take me; not as a reporter, just to watch as an interested bystander.

Now, at this point, I had no idea of what the procedure was at the meat packing plant. But it was here in the rear of the building where the butchering process started! At one end of a huge room was a narrow cattle chute, into which beef cattle were being shuttled – one at a time. At the other end of the room, higher up on a raised platform, sat a man with a rifle – a sharpshooter. This was the slaughterhouse!!

As the first of the cows moved to the front of the chute, the sharpshooter raised his rifle and shot it through the head. When the cow collapsed, a man clad in a white apron (soon to be spattered with blood), wearing rubber boots and wielding a knife, immediately moved in and slit the cow’s throat. Grabbing the dead beast by the hind legs, the man hooked the hooves to a hoist and the cow was pulled along a raised railing to be skinned and butchered.

I have no idea how many cows that sharpshooter shot each day, but I’ll bet he put in a full day’s work, as did those guys who worked the cows on the floor!

That was the only time I was ever in the rear of the Talone building. But the visual experience didn’t stop me from enjoying the quarter section of beef that my parents had ordered and had packaged at Talone’s one Christmas for my wife and me and our children.