Escondido prep teams gear up for the playoffs 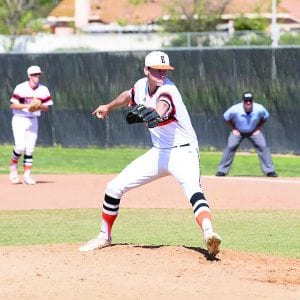 Right-handed starter Jake Moskowitz figures to be a go-to guy for the Cougars during the postseason.

With the regular season prep baseball schedule having recently concluded, attention now will turn to where the rubber truly meets the road, this week’s San Diego Section CIF playoffs.

The Escondido area will be well represented by four teams that will be competing in a total of three different divisions. Let’s take a look at the squads involved with a bit of set-up provided about their initial matchups.

Escondido (20-7) – Despite dropping three of its last five contests down the stretch, Esco High nonetheless enjoyed another highly successful season and looms as a legitimate title contender. Coach Aaron Hoofard’s Cougars made a strong push into the semifinals last year and it’s been their stated goal since day one to try and better that finish.

The third-seeded Cougs are due to commence their postseason this Wednesday with a home game versus the winner of a play-in contest between Southwest EC (11) and Sage Creek (6). Experienced and talented, Esco has the requisite tools to make a definitive statement in the playoffs.

The EH batting order is populated by an array of players who can not only get aboard but can provide some sock as well. Infielders Ben Donnelly and Kellen McCoy are dependable contact hitters while Hunter Bean and Jacob Moskowitz are quite capable of muscling up and reaching the gaps. Brenden Garcia is another solid, steady hitter who can make an impact. 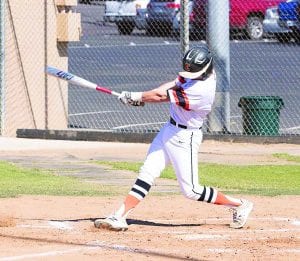 Hustling infielder Ben Donnelly should be a key table-setter for Escondido High.

As for the arms, there’s a lot to like. Moskowitz makes for an imposing sight on the hill and with a sneaky fastball and plus off-speed stuff, he can be nails when he’s on and a potential playoff horse. Also look for the hard-throwing Bean and gifted Juan Cervantes to be heard from if the Cougs continue to advance.

Classical Academy (20-8) – Second-seeded Classical enters postseason play on an absolute tear. Winners of eight in a row and 15 of their last 16, the Caimans clearly have the wherewithal to chase a championship.

To begin with, CA has an embarrassment of riches when it comes to a pitching staff that can go plenty deep. Five hurlers have made seven or more appearances and each carries an ERA of no more than a sterling 1.66. The headliner of this notable mound contingent has been ace right-hander Jake Mizel, who has lost just once in eight decisions. But impressively backing him up has been sophomore standout Zack Jordan, veteran Chase Martinez, Jordan Peterson and young Tim Boshaw.

And just as encouraging, there’s no shortage of talent at the plate as well. The versatile Martinez is doing some serious raking, not to mention damage with a robust .369 average. Another heavy hitter has been super soph outfielder Noah Dull, who is the team’s top hit (33) and RBI (24) producer. Junior Ethan Pillsbury (.338 average) has also been another huge contributor with the bat. 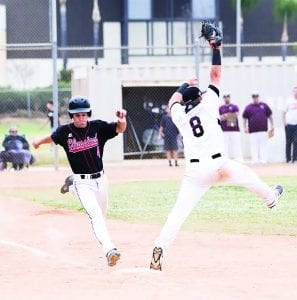 Not only can EC’s Tony Leishman flat out hit, he can also shine defensively as shown here with a stellar stretch and grab.

Escondido Charter (15-12-1) – By virtue of their lofty No. 2 seed, the White Tigers won’t be  part of the play-in round and will entertain the winner between El Cajon Valley (10) and Julian (7) for a Wednesday afternoon home contest.

EC is a real threat to make a deep run because it possesses both the sticks and arms that can get the job done. On offense, the White Tigers can be potent with leadoff hitter Tristan MacMahon (.348 average, 40 runs scored, 14 steals) proving to be a superb igniter with his knack for kick- starting things.

Moreover, when you’ve got a pair of mashers like Matthew Coe and first baseman Tony Leishman, EC is fully capable of erupting quickly and often. Leishman’s bat has been sizzling all year long as he has paced his club in average (.517), hits (45) and doubles (15). Meanwhile, the multi-dimensional senior Coe has been a mighty force himself, producing 35 RBIs, a noteworthy 7 triples while also drilling the ball at a sensational .512 clip.

On the mound, the White Tigers have more than the necessary quality and 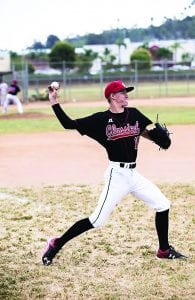 Zack Jordan is one of the many dependable arms that Classical can call upon. Photos by Lenny Kerbs

depth. Tall Thomas Brunette has been solid and dependable (4-4, 2.43 ERA) in a starting role as has freshman Devin Stinnet (2.95 ERA, 4-4). Plus, EC has the ultimate wildcard in the righty Coe (1.40 ERA) who has shown flashes of domination during his five stints on the hill.

If the Pats are to get past the Bruins and surprise the prognosticators, they’ll need their captain and hitter deluxe Jesse Cardenas to show the way. The senior Cardenas has been a veritable one-man wrecking crew while leading OG in every significant offensive category.

And when it comes to pitching, it figures that southpaw Cristian Cisneros, who is the pacesetter in appearances, will be the arm upon which the Pats will rely.