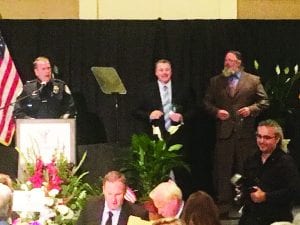 The following information is taken from the award citation:

Some cases are very large in scope and require multi-agency cooperation.  The officers honored were able to work together to bring closure to this tragic case.

On March 7,  2017,  Catherine Kennedy was driving in the 1800 block of East Grand Avenue on her way home from Bible Study.   Unbeknownst to her,  gang members had vandalized an apartment complex at 1811 E Grand Avenue,  which is a complex that has been historically plagued with violent gang related incidents and shootings.

The resident gang members chose to retaliate to this vandalism by chasing down and shooting at the fleeing suspects.   Mrs. Kennedy was hit as she drove by,  tragically and fatally wounded by the gunfire.

Detectives Tom Love, Nick Rodelo, and Pat Hall from the Escondido Police Department Gang Unit  were primarily responsible for investigating the case and Detective Love traveled 700 miles away to apprehend the primary suspect. These detectives organized multi and inner agency cooperation and assistance to accomplish the goal, pushing the pace, working tirelessly for over a week straight without a break until the two suspects were located and ultimately taken into custody.

Their efforts brought closure to the case,  both for the victim’s family,  and for the other innocent residents of the area.   Since the arrests,  and follow up investigation,  calls for service at the complex have dropped significantly,  and the number and frequency of gang related incidents has been greatly reduced in the area.

Deputy US Marshal Arturo Beker and Escondido Police Officer John Mahin, as members of the US Marshals San Diego Fugitive Task Force, Beker and Mahin have been pivotal in capturing numerous dangerous criminals in the North San Diego County area.

The pair have closed over 150 felony warrants for various violent offenses from the North County area. These captures have included homicide suspects, some of which were North San Diego County’s most wanted criminals. One case in particular involved the location and apprehension of fugitives wanted for the tragic killing of Catherine Kennedy.

Beker and Mahin were tasked with locating the West Side Gang members involved in the shooting. They assembled a team of local and federal officers that were essential in the apprehension of the main suspected shooter who had fled to the Sacramento area, as well as, several other suspects involved in the incident.

In April 2017, Carlson and Zack concluded a 13-month investigation targeting a multi-pound methamphetamine and gun trafficking organization operating in and around Escondido.  The investigation revealed that the primary activity of the targeted organization was supplying guns and meth to the Diablos gang.

As the lead investigators in this case, Carlson and Zack developed informants, conducted surveillance, gathered intelligence, and prepared reports and affidavits, which led to Federal Court authorization to intercept phone conversations and electronic communications between members of the organization.  They also directed several undercover drug and gun purchases from members of the organization, which resulted in the seizure of high-powered firearms and methamphetamine. This investigation also resulted in the federal indictment of 20 associates and members of the Diablos gang.

During their investigation Catherine Kennedy was shot and killed by rival gang members. Based upon evidence collected by Carlson and Zack, the shooter was identified as one of the leaders of the Diablos gang, who fled the area after the shooting.

SA Carlson’s and Det. Zack’s efforts led investigators to the suspect’s Northern California “hide-out,” where he was arrested without incident. The shooter was subsequently charged with murder and is awaiting trial.

For their efforts on this investigation and their dedication to the North County community, SA Mark Carlson and Detective Chris Zack were recognized. —Our thanks to North San Diego Business Chamber for their courtesy in letting us reprint this information.