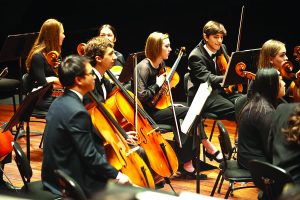 Civic Youth Orchestra will present its annual spring “Showcase” on Sunday, March 19 at 3 p.m. at the California Center for the Arts, Escondido, in the Center Theatre.

All six (6) ensembles will perform on the program: The Primary Orchestra, conducted by Ted Foster, the Chamber and Intermediate Orchestras, conducted by Carolyn Lechusza Aquallo, the Wind Ensemble, conducted by Jonathan Ingber, the Symphonic Orchestra, led by Alyze Dreiling, and the CYO Symphony, led by Music Director Robert Gilson.

Civic Youth Orchestra is celebrating its 60th anniversary this year and will conclude the anniversary celebration with a weekend of activities on June 17 and 18.  Information about these events are available on the CYO website: sdcyo.org.

The mission of this by-audition regional program is to provide high quality orchestral instruction and performance opportunities through the guidance of professional educators and musicians.  Through the audition process, students are placed in the appropriate ensemble.  Requirements of the program include taking private lessons and participating in their school orchestra or band if the school has the appropriate ensemble.

CYO offers three (3) concerts a season at the California Center for the Arts, Escondido, through the sponsorship of Jean Will, long-time resident of Escondido and ardent performing arts aficionado.  She not only supports the CYO program, but also is the creator and sole benefactor for the Jean Will Strings program, a program designed to offer string instruction to 2nd, 3rd, 4th, and 5th graders in the Escondido community.

A 60-year tradition of music

Christenson then led the orchestra for the next eight years, when he left for California State University, Northridge.  Robert “Bud” Emile, concertmaster of the San Diego Symphony and music professor at Grossmont College, then took over.  The orchestra rehearsed on a weekly basis in San Diego and had a series of successive conductors after Dr. Emile’s tenure.

Marlin Owen, David Amos, Thomas Nee, and then Warren Torns were leaders of the program for the next two decades.  During this time, a training orchestra and a wind ensemble were added to the program.

In 1986, CYO expanded into North County.  CYO started a fledging program at Palomar College though the efforts of Ulli Reiner and Viola Panman, string teachers in the north County, and Robert Gilson, a music Professor at Palomar College and Conductor of the Palomar Symphony at the time.

For the next 21 years, the CYO program flourished in two different locations, with Warren Torns leading the program in San Diego and Robert Gilson leading the program in San Marcos.  As orchestral programs in the public schools changed over the years and new schools were constructed, particularly in the north County, string instruction became available to more students, particularly in the Carlsbad, Oceanside, and Poway districts.

Civic Youth Orchestra began international touring in 1993 (Salzburg and Vienna, Austria), then toured every other year from 1996 to 2008.  In the late 90’s the program in San Diego was disbanded and since that time CYO resides in the north County, but serves students from all of San Diego county, as well as southern Riverside county, particularly from the Temecula, Murrieta, and Menifee communities.

The 60-year old organization has planned a full weekend of celebratory events this June.  On Saturday, June 17, a reception, dinner, and entertainment will take place at the Hyatt Regency La Jolla.  The guest of honor for this event is the founder of the program, Daniel Lewis.

Alums from the original orchestra in 1957 will be in attendance, as well as many alums from the past six decades, former and current Board members, and current families.  On Sunday, June 18, CYO will present its annual end-of-year concert at 3 p.m. at the Jacobs Music Center, formerly known as Copley Symphony Hall.  Former members of past orchestras will join the current Symphony at the end of the concert for a thrilling orchestral finale, followed by a reception honoring the graduating seniors from the orchestra.  This has become an annual tradition for the seniors.