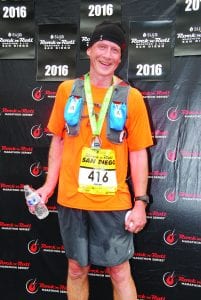 This year the Rock ‘n’ Roll Marathon Series is celebrating 20 years running. The running series started in San Diego as a single marathon in 1998 and has grown to 29 races across the globe (includes Dublin, Las Vegas, Brooklyn, Madrid, etc.). The annual Rock ‘n’ Roll San Diego Marathon (the race that started it all) returns the weekend of June 3 – 4 and more than 30,000 runners will toe the start line. Of those 30,000 plus runners 84 of them have run every race single marathon since the inaugural race including, Johan Otter.

Otter is 55 years old and is a physical therapist. When asked about his favorite San Diego race moment he said, “Last year running through the ‘wear blue: run to remember’ American flags. I don’t normally get emotional but that brought tears to my eyes. The whole thing was massively impressive. It was amazing.”

Otter kept his streak going in 2006, barely nine months after being attacked by a grizzly bear in Montana’s Glacier National Park. The attack left him with a broken neck and more than 70 percent of his scalp was ripped off. Otter underwent 10 surgeries after the attack.