Escondido man on team that will represent County in national competition 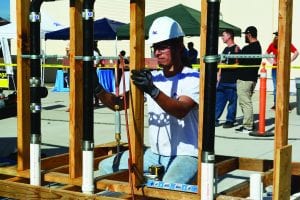 Gabriel Avila Cuenca came in second. He lives in Escondido and works for Davis Mechanical.

A six member team, including a mechanic from Escondido, will represent San Diego in Craft Championships Crown national competition in 2018.

Winners went head to head with their peers for the right to represent San Diego at the upcoming ABC National Craft Championships next March in Long Beach, California. Competition took place in a day-long event at the ABC Training Academy in Poway on Saturday, December 2.

Daniel Fortini of Ramona won in the Sheet Metal category for 2017. Fortini placed second last year. He works for Alpha Mechanical. Alberto Ceballos of Poway placed second. He is employed by WH Robbins.

Gabriel Avila Cuenca came in second. He lives in Escondido and works for Davis Mechanical.

The winner of the 2017 Electrical competition is Joshua Stuart of San Marcos. It is the second straight win for his employer, Bergelectric. Placing second Kevin Mizicko of Western Pump. He lives in Spring Valley. Coming in third was Brent Planche of Carlsbad, also employed by Bergelectric.

The Craft Championship competition provides a platform showcasing the high quality ABC San Diego Training Academy program. It puts an emphasis on the important role craft skills training plays in construction by evaluating contestants’ technical knowledge of their craft as well as their skill and talent.

ABC San Diego President and CEO Shandon Harbour said, “Because the National Championships are in California, we want to have an especially strong presence. We expanded the opportunity for apprentices to compete on a national level, and they eagerly accepted the challenge, resulting in the most local competitors in many years.

“This event receives strong support from our contractor members, who employ our apprentices, as well as our sponsors and vendors. All of them value the professional pride shown by these competitors, who represent the skilled construction workforce of the future.”

Signing on to participate in the competition is a significant commitment for the apprentices and trainees involved. Contestants must first successfully complete hundreds of hours of classroom training and thousands of hours of practical field experience to be eligible to compete. If competitors score high enough on a written exam during the first stage of competition, they move to the skills portion of the competition to determine the San Diego area champions. Project scores and written test scores are combined to determine the winner.

The competitors must race against the clock to complete a project as close to the specifications provided as possible. They may only use materials they are provided. Judges who are experts in each craft field including previous national craft champions score each project.