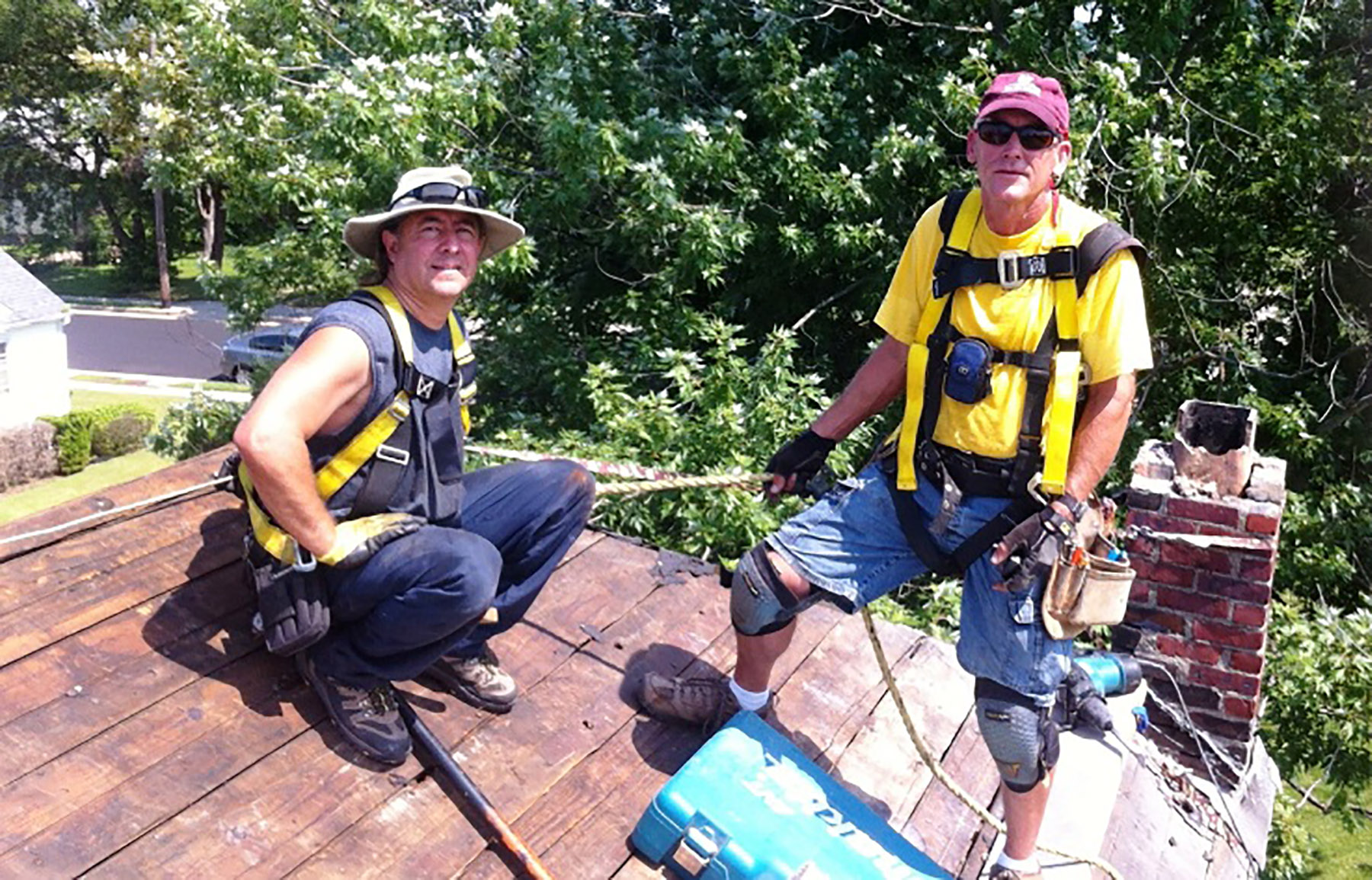 Chris Read and IRT volunteer Paul Trimble repairing a roof in New Jersey for a Hurricane Sandy victim in 2014.

Chris Read of Escondido this week is leading a team being deployed by San Diego-based International Relief Teams (IRT) to Lake Charles, Louisiana to rebuild homes for Hurricane Harvey victims who cannot recover on their own.

The team of 16 construction volunteers landed Sunday, January 6 on a United Airline flight and will work there until January 13.

Hurricane Harvey was a powerful category 4 storm that hit Texas and Louisiana in August of 2017. It destroyed or damaged hundreds of thousands of homes and many families continue to suffer. 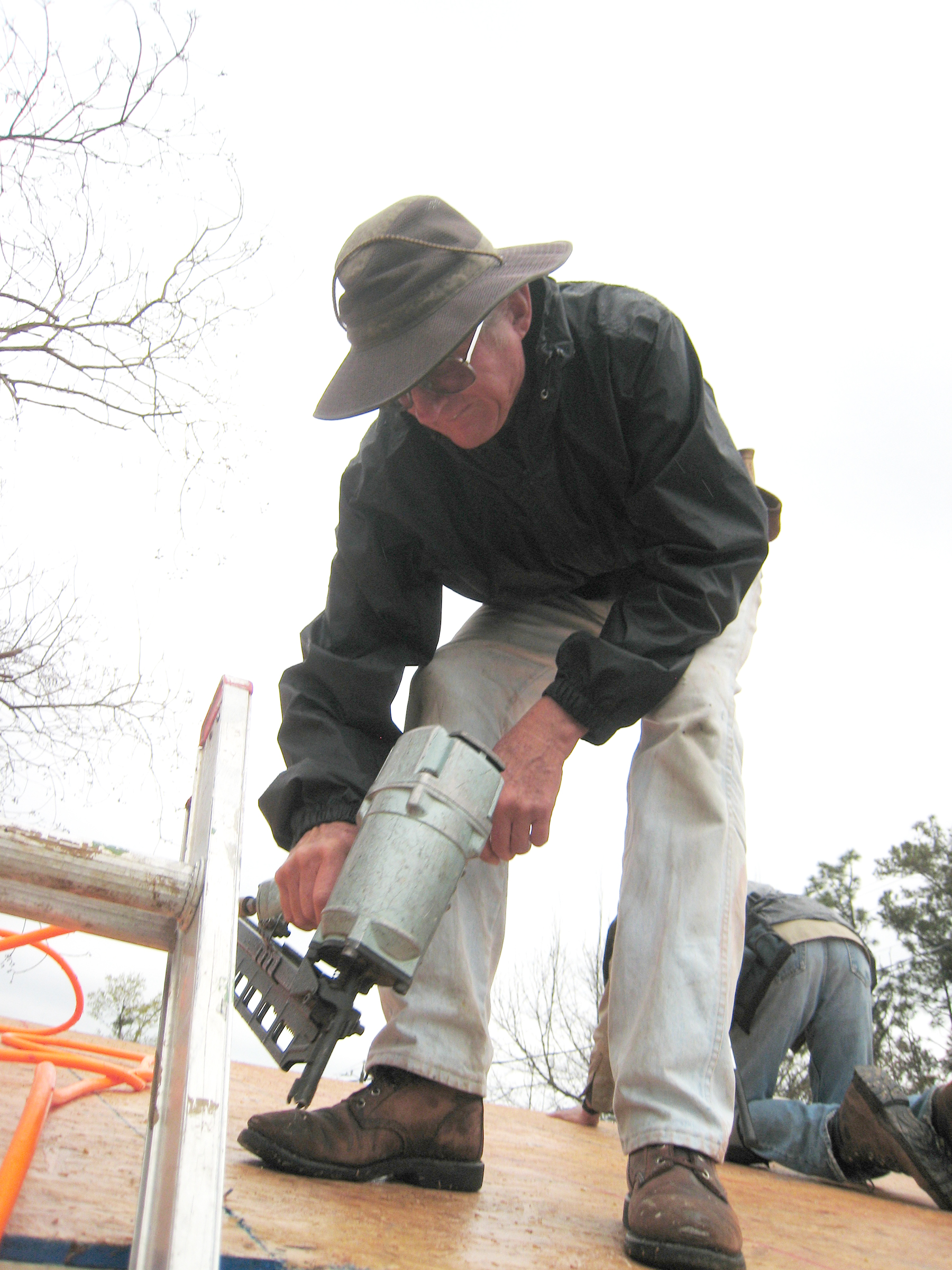 Steve Walsh at work on an IRT project.

Thousands of residents, including the elderly, the uninsured, the disabled, and the poor, who lost their homes are still displaced, living with friends or family in Louisiana, another state, or in FEMA trailers. Some– the very poor – are living in their mold-infested, damaged homes.

In partnership with the Louisiana United Methodist Conference, skilled IRT volunteers from San Diego and around the country, will help rebuild and repair damaged homes for families that were affected by this disaster.

“Many people don’t realize that recovery after a disaster can take years. That is why IRT stays involved for years after the disaster, helping poor and underserved families rebuild and recover,” said Barry La Forgia, IRT Executive Director.

Read’s team is the first to deploy to Louisiana in 2019. IRT sent six teams in 2018 and will continue to send volunteer teams in the years to come as long as they are needed.

IRT has 30 years of experience in assisting victims of disasters, both nationally and internationally. IRT also rebuilt and repaired homes following Hurricane Katrina in Mississippi from 2005-2012 and Superstorm Sandy in New Jersey from 2012-2016.

Read is a current board member who has volunteered with IRT since 2009. He has been on 42 teams total with IRT. He participated in the following disaster recovery efforts:

He has served as team leader on every team since 2013.

The Times-Advocate spoke to Read on Wednesday. “We are rebuilding homes that were damaged in southwest Louisiana by Hurricane Harvey,” he said. Although Houston got the lion’s share of the attention after that storm, the Lake Charles area was also hit hard.

“We are repairing homes in this neighborhood, which had three to four feet of water,” said Read. “After the water recedes, they air out the drywall to the four foot line. We are replacing drywall, flooring and cabinets. Usually a local contractor checks out the electrical.”

Read, who is semi-retired, got involved in this outreach after Hurricane Katrina. “There it was a full force hurricane in Biloxi, Mississippi, where we rebuilt homes from scratch,” he recalls “We would start with a clean deck because they were wooden foundations so they could be above the new food plain. We could start Monday and by Saturday we could have a house with a roof and weathered in and they would have the local contractors do all the plumbing.”

Read’s team encountered a similar situation in New Jersey, after it was hit in 2012 by Hurricane Sandy. “The floodwaters came in at 3-4 feet and soaked the walls. We took it from there,” he said.

Typically, they come after people have exhausted other resources. “The IRT shows up a year after the event and we pick up the pieces for people who have fallen through the cracks because they didn’t have correct insurance or lost jobs or couldn’t have their homes repaired. The United Methodist Council on Relief and Catholic Charities are two groups we work with. They do the case work, do triage and they figure out finances, and what resources they do have. We show up and they have the materials waiting or bring it.”

They typically stay at rooms provided at a Methodist church, such as a gym or classroom. They sleep on air mattresses or cots. “Most have a couple of showers set up and a kitchen,” says Read. “We make our own breakfasts and brown bag lunch and dinners we usually cook ourselves. It’s not really roughing it but it is sleeping on an air mattress in a gym.” Read does six of these weeklong trips a year, about every two months.

He is a semi-retired business owner who recently sold a veterinary urgent care he and his wife had owned. He has been doing repair work for IRT for ten years. “I still do construction and remodels with my brother. I’ve been in construction for a number of years.”

Read is the team leader for the 16 person team. A logistics person sets up the airline itinerary. “I just show up on Sunday morning and we fly here and I figure out what the work is for the team. Right now, we are working three different houses with 16 people. Sometimes we are in the same house. We do a lot of roofing. There is a huge need for roofing and we are one of the few teams with the skills to do it.”

Read finds, “tremendous satisfaction in helping the people who have fallen through the cracks. It’s a great group of people who come on these trips. They are people from all different backgrounds. A few construction pros, but also college kids, or teachers that can take a week off.” Each time there is a well-known disaster, his group gets inquiries from people who want to help, either through volunteering or donations.

One house they are working on at Lake Charles is occupied by a single mom with seven boys. “They are just extremely grateful. We are the last resource to help them move back in. Many have been in FEMA trailers for a year and you can only keep them for a year. Many have lost their jobs, or have health challenges. Many are not used to working with contractors or doing it themselves.”

Many have been taken advantage of by unscrupulous people who start a project, and say they need $40,000 to start—and then disappear. “By that time FEMA is gone, insurance has paid what they are going to pay off. Catholic Charities are their last hope.

Another Escondido resident Steve Walsh, a longtime volunteer with IRT, is not on this particular team, but has been on many others.  He has been volunteering with IRT since 1988. He has been on a total of 66 teams with IRT and in many capacities, but mostly as a skilled roofer. He has helped rebuild and repair homes for disaster victims after the following domestic disasters: Hurricane Floyd, North Carolina (2001), San Diego Fire Recovery, California (2004), Florida Hurricanes (2004), Hurricane Katrina, Mississippi (2006-2011), Tornado Recovery, Alabama (2012-2013), Hurricane Sandy, New Jersey (2013-2016), 2016 Floods, Louisiana (2017-2018) and Hurricane Harvey, Louisiana (2018.)

Walsh’s most recent trip was to Lake Charles, Louisiana in November of 2018 to repair homes for Hurricane Harvey victims. He has also volunteered in several capacities in some of IRT’s past Mexico programs.

Read told The Times-Advocate: “If people want to help, point them toward our IRT website, we are always looking for new volunteers. We have teams going all the time. They just had storms in North Carolina. We will probably head there in another six months from now. There’s always opportunities to help out with either time, talent or treasure.”

International Relief Teams alleviates the suffering caused by poverty and disaster around the globe, from the forgotten corners of the world to right here at home, by sending volunteer teams and medical supplies to make immediate change for the world’s most vulnerable people. For more information visit: www.irteams.org.