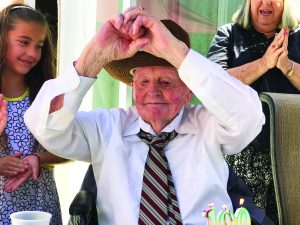 Surrounded by dozens of doting family members and friends Bill Burgreen prepares to blow out the 100 candles on his cake.

Escondido’s Bill Burgreen celebrated his 100th birthday on April 29 at a board and care facility surrounded by more than 50 guests and well-wishers, including children, grandchildren, great grandchildren and friends.

Mr. Burgreen had five children, including Robert Burgreen, who was San Diego chief of police from 1988-1993 and who is now deceased. Others still living are Charlotte, Jerry, Janet and Joyce. His wife of 75 years, Ima Jo, died three years ago.

Mr. Burgreen, nicknamed “Red” for his hair, served in the U.S. Army in WWII and retired from Convair Vultee (General Dynamics) as an experimental airplane mechanic. He worked for 30 years for the company. One project he worked on was the “Dart,” one of the very first experimental rockets.

Bill Burgreen grew up in Cherry Valley, where he spent summers picking cherries on his parents’ farm.  He fell in love at first sight with his wife of 75 years, Ima Jo at Beaumont High School in 1938.

They lived in Carlsbad with their first son, Robert, where they grew strawberries to sell for 10 cents a basket.  They raised all five children on the family’s 10-acre La Mesa ranch that they originally called Burgreen Acres (now Rolando Park, off Massachusetts and Hoffman in La Mesa).

They built a cabin in Big Bear in the 1960’s that was a joy and a haven for all of their children and grandchildren and family.  After Mr. Burgreen retired from Convair, the Burgreens traveled and lived in several cities in California and Washington state.

Granddaughter Laura Burgreen Aragon told the Times-Advocate: “His children, grandchildren, great-grandchildren and friends were truly blessed to be able to come together to celebrate his 100th birthday together and honor this amazing and beloved man.”