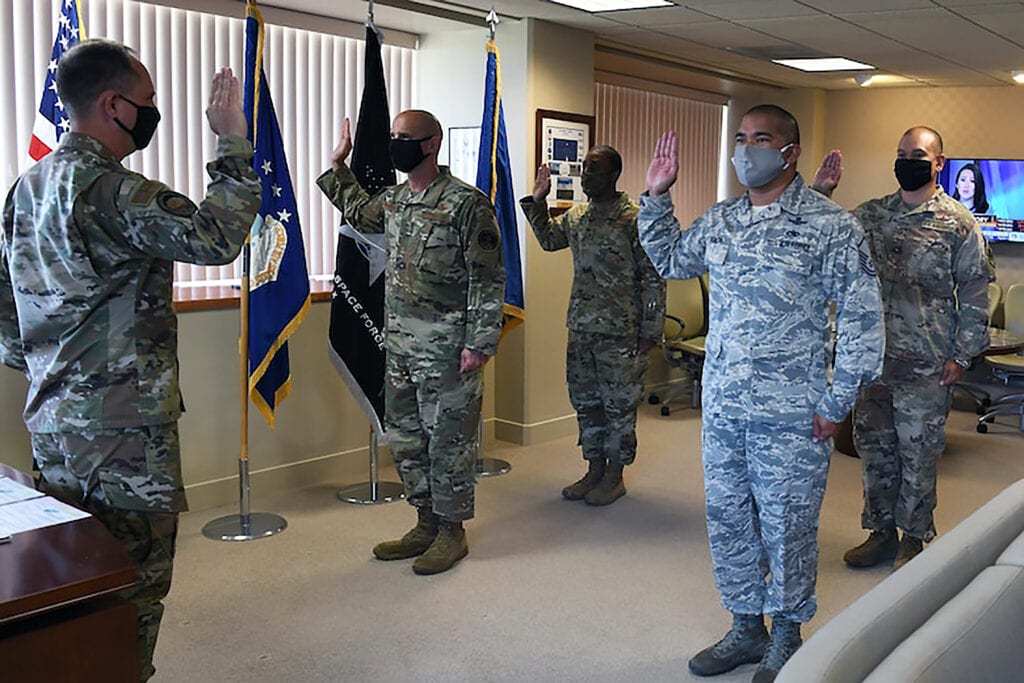 Orange Glen High School graduate Benjamin Rigoberto Lopez of Escondido September 1, 2020, became one of the first people to be inducted into the United States Space Force at Vandenberg Air Force Base.

Lopez studied graphic design at Palomar Community College beginning 2016 and joined the United States Air Force in 2018. He is the son of Rigoberto Lopez Jr. and April Solo.

This event marked yet another significant milestone in the development of the USSF, since its creation on Dec. 20, 2019, officially commissioning and enlisting the newest members of the Space Force.

“This is a very special day in the history of our nation’s military, and one I’m sure you’ll remember the rest of your lives. The solemn oath you pledge today for service in the Space Force marks a moment where the foundation of our nation, the Constitution, meets the best example of boundless future – the space domain,” said Maj. Gen. John E. Shaw, U.S. Space Force’s Space Operations Command commander. “As the newest members of the Space Force you will protect the interests of the United States in space; deter aggression in, from, and to space; and conduct space operations to defeat adversary threats.”

The USSF organizes, trains, and equips space forces in order to protect U.S. and allied interests in space and to provide space capabilities to the joint force and is responsible to developing military space professionals, acquiring military space systems, maturing the military doctrine for space power, and organizing space forces to present to our Combatant Commands.

“It didn’t even hit me, until during the event, that I was going to be a part of building a service from the ground up. To be a part of this is truly humbling, these first actions of myself and many other space professionals will be felt for years to come,” said Airman 1st Class Benjamin Lopez, 2nd Range Operations Squadron aerospace surveillance officer. “I’ve only been serving for a little over two years, so to have the majority of my career to now grow and mentor in the USSF is something very unique. More experienced enlisted members will always have Air Force experience to rely on, but going forward, as more people join this new branch, only having USSF experience will become the new normal and I think that’ll be very interesting.”

“I want to thank each of you for the service you will contribute to the Space Force in the days ahead,” said Maj. Gen. Shaw. “Though we may field awesome capabilities across distant orbits, you are the most important resource the Space Force can possibly have. Semper Supra!”

The new motto of the Space Force means, in Latin, “Always Above.”