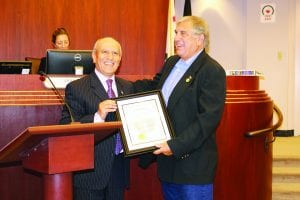 Mayor Sam Abed (left) presents a certificate of appreciation to Bo Mazzetti chairman of the Rincon Tribe of Mission Indians for their contribution of $800,000 to help pay for the widening of a section of Valley Center Road/East Valley Parkway.

Escondido Mayor Sam Abed Wednesday afternoon credited an additional contribution from the Rincon Band of Luiseño Indians of more than $250,000 with providing the necessary funds to enable the city to fund the widening of about a mile of Valley Parkway that connects the city and Valley Center.

Abed presented Rincon Tribal Chairman Bo Mazzetti with a plaque thanking the tribe for stepping up to provide the additional funding—which will make it possible for the city to proceed with the road work later this year.

Abed and Mazzetti emphasized the friendship that has grown between the tribe and city over the last few years as they worked together to iron out the details of a federal water settlement that Escondido, Vista and the tribes fought over for 50 years.

“We are joined at the hip,” declared Mazzetti, who observed that the people of his reservation, “drive on the roads,” and  praised a recent U.S. Supreme Court decision the tribe won against the state of California that allows gaming tribes to contribute casino mitigation funds to their local communities, instead of paying it to the state’s general fund.

“I’ve been around for seventy years and our relations have never been better,” said Mazzetti.

He noted that the current city manager, Jeffrey Epp—who was previously the city attorney—had worked together with the tribes in resolving the 50 year old tribal water dispute.

The Rincon tribe provided a total of $800,000 to the $9.7 million that will be spent to widen a section of East Valley Parkway/Valley Center Road from two lanes to four lanes—eliminating a bottleneck that has long caused traffic slowing.

Originally the tribe’s “fair share contribution” towards the widening was determined to be $580,000. That was calculated based on increased traffic that is expected to be generated by recent improvements to Harrah’s Resort Southern California.

Abed said, “Thank you for generously exceeding your required fair share to fully fund the road improvement on East Valley Parkway. Without hesitation, the Rincon Tribe donated the additional money that allowed the city to begin construction on this section of road pretty soon we hope.”  The mayor added that this contribution would have a “far reaching impact.”

He noted that the stretch of road that goes from Valley Center to Bear Valley Parkway and to the I-15 is “mostly done.” “This stretch is very critical to help tens of thousands of citizens to really mitigate the traffic. Your generosity is very appreciated. It is a partnership between the city of Escondido and the Rincon Band that has made it possible for the East Valley Parkway, Valley Center Road widening, to begin construction this summer. We are very proud of our partnership. We thank you for your contribution.”

In other business, the council heard a report from the new City Treasurer, Douglas Shultz, gave the council a report on the city’s investments and investment strategy. The mayor praised Shultz “for your creative ideas” and for proposing a pilot program he proposed for investing the city’s funds.

City councilmember Olga Diaz grilled the new treasurer on his proposals. She said she wanted to satisfy herself that he was taking good care of the city’s money, but promised not to subject him to a similar questioning next time.

Mayor Abed took a moment “to recognize the staff and the five of us” for the completion of the Jim Stone Pool Renovation Project.  The project was completed with funds from a Housing Related Park (HRP) grant for $427,517.

“This is a significant item for our community,” said Abed, who added, “I would like to challenge the social media to write about something positive.”

The renovation was completed by Mission Pools. It included removal and replacement of plaster, tile, rails, and fittings, LED lighting upgrade, repair of rusted areas, identification and repair of leaks, replacement of the fence screen and canopy cover, and replacement of failing pool mechanical equipment. The project also included the installation of a new pool heater at the Washington Park Pool.

The city has more than 20 miles of corrugated metal pipe storm drains. The council voted to hire the consulting firm Brown & Caldwell for $499,437 to do an assessment of the city’s storm drains to see which drains can be saved and which need to be replaced.

Julie Procopio, the city engineer, gave the report, noting that Corrugated Metal Pipes (CMP) were largely installed in the city between 1920-1930, and that such pipes normally have a lifespan of 30-50 years.

CMP is no longer used as a storm drain material because when it fails it can be quite nasty to deal with. Several years ago, a failure of CMP storm drain in Fashion Valley ended up costing tens of millions of dollars, said Procopio.

In Pebble Beach, the failure of a CMP storm system caused a large sinkhole.

“If it fails, you must dig it up and replace it,” said Procopio. “It is much cheaper to rehabilitate CMPs than to replace it.” If you can find it before it fails you can rehabilitate it by spraying it with gunite or expand a protective surface inside the existing pipe like a balloon.

The cost to rehabilitate a CMP pipe is $288 per linear foot compared to $550/ft.  to replace it. If you factor in other costs associated with replacing a failed storm drain, such as surface improvements and traffic control, that cost can increase—possibly to $1,000 per foot.

“Letting pipe fail can cost three times as much as doing maintenance,” said Procopio. “We want to assess now and save the city money.”

Brown & Caldwill will inspect the inside of the storm drains using cameras mounted on robots. The city itself has such equipment, Procopio answered when asked why it didn’t use that equipment instead of paying a contractor. The city’s cameras are busy keeping watch on the city’s sewers, she said. “They are very busy,” she said.

“We can’t emphasize enough how much less it costs,” she said. She noted that B&C has done similar work for many San Diego County cities and over 35 pipeline projects. They camera examines the pipeline and assigns a rating for how likely it is to fail.

She added that if the staff’s recommendation was adopted, they hope to have the inspection done by November.

“I’m all in on this,” declared Gallo. “This is routine for the San Diego County Water Authority (on whose board he serves) because if a water main fails people are cut off for days. I think it’s pretty critical to do the prevention maintenance thing.”

Councilmember Mike Morasco added, “It’s probably something we should have been doing a long time ago.”

Abed said, “I thought that half a million dollars was the bad news but after hearing your report I thinkit’s the good news.”

The next meeting of the city council is July 19, after which it will take a three-week summer break.