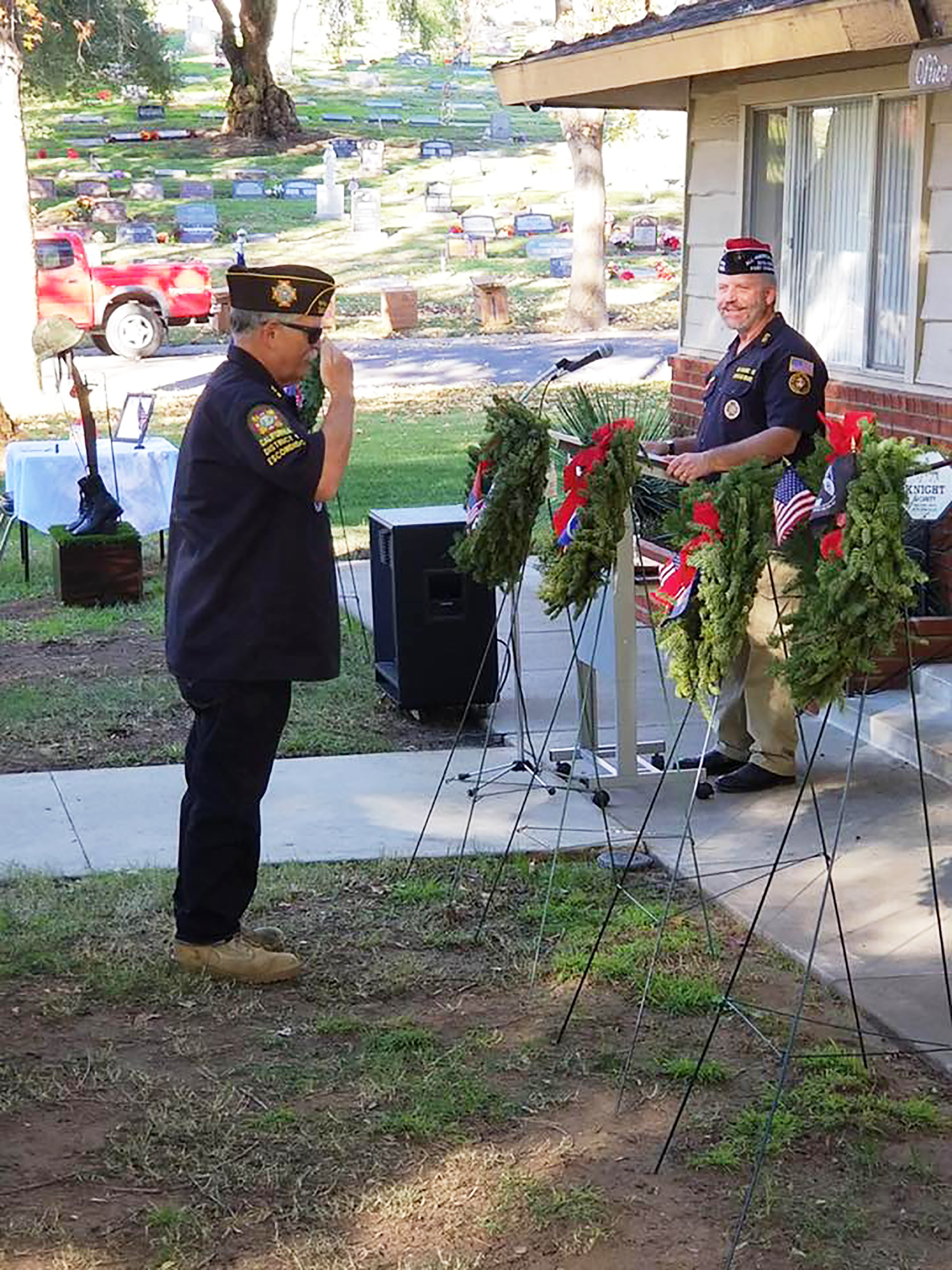 Matt Foster, Commander of Veterans of Foreign Wars Post 1513 of Escondido and Valley Center (right) was the MC for the 1st annual Wreaths Across America, Escondido held at Oak Hill Memorial Park.

The MC was Matt Foster, commander of Veterans of Foreign Wars Post 1513 of Escondido and Valley Center, and Chairman of the North County San Diego Veterans Stand Down.

About 500 wreaths were placed on veterans graves this year. According to Foster, “We plan to advertise and grow our event to have wreaths for the about 4000 veterans buried there.”

Posting the Colors were the Cadets from Escondido Cadet Squadron 714 Civil Air Patrol.

Singing the National Anthem was Air Force veteran Bob Schulken, of American Legion Post 149, who also led the group in the Pledge of Allegiance.

Leading in the prayer and benediction was Loretta Cook, Chaplain of VFW Auxiliary, Post 1513.

Foster told the group, “Right now, across the country at more than 2000 memorial sites like this, we are gathered as one nation to Remember, Honor and Teach. We are all proud to be Americans that live in a free society made up of many people, from many walks of life. The freedoms we enjoy today have not come without a price. Lying here around us and in cemeteries throughout this nation are men and women who gave their lives so that we can live in freedom and without fear. We can worship as we see fit. We can raise our children to believe as we do. We can travel from one end of this great nation to the other and not have to ask permission. We are free to vote for whomever we feel should be in government office, with no explanation needed. We have the right to succeed and we have the right to fail at whatever endeavor we wish to pursue.

Foster continued, “The United States of America was founded on the ideals of Freedom, Justice and Equality. Our Nation stands as a shining beacon of liberty and freedom to the world. We thank those who gave their lives to keep us free and we shall not forget you. We shall remember.

“Many of you here are Veterans of wars and conflicts that America has fought to protect the innocent and oppressed. This nation has always been the first to stand up for the freedom of people from around the world. Many of you here today have answered that call and served your country well. We are here today to say, ‘Thank you’ and we are honored to know you.

Foster noted that there are many men and women serving today in all branches of the military, here at home and in places far away that most have never heard of. “These men and women are part of the best-trained, best-equipped force in the world. We honor them and their families for the sacrifices they make each day to keep our country safe from terrorism, hatred and injustice.”

Foster continued, “President Ronald Reagan once said, ‘Freedom is never more than one generation away from extinction.  We didn’t pass it to our children in the bloodstream. It must be fought for, protected, and handed on for them to do the same, or one day we will spend our sunset years telling our children and our children’s children what it was once like in the United States where men were free.’  Today, we show a united front of gratitude and respect across the United States of America as we REMEMBER the Fallen, HONOR those who serve and TEACH our children the value of freedom.”

At the ceremony there were seven wreath stands, representing the services who fight for our country and the POW/MIAs. Local veterans were selected to present each of their service’s wreaths. After the ceremony, they placed their wreaths around the veterans’ memorial.

Army veteran Virginia Burke placed a remembrance wreath in memory of those who served and are serving in the United States Army.

Marine Corps veteran Aaron Andrews placed a remembrance wreath in memory of those who served and are serving in the United States Marine Corps.

Navy Chief Warrant Officer 4 Misael Alvarado placed a remembrance wreath in memory of those who served and are serving in the United States Navy.

Air Force veteran Mike Frank placed a wreath in memory of those who served and are serving in the United States Air Force.

Coast Guard veteran Thomas McHenry laid a remembrance wreath in memory of those who served and are serving in the United States Coast Guard.

Merchant Marine Sydney Harr will lay a remembrance wreath in memory of those who served and are serving in the United States Merchant Marines.

Marine Corps Vietnam veteran John Gonzalez placed a remembrance wreath in honor of the 93,129 United States Servicemen from all branches of the service whose last known status was either Prisoners of War or Missing in Action.

Foster noted that about 4,000 veterans are buried in the Escondido cemetery. He told the stories of three of them.

John R. Simpson, the namesake of VFW Post 1513, was visiting his parents here in Escondido when news of the United States’ entry into WWI was announced. He jumped at the chance to serve and was the first Escondido resident to sign up. John fought in many of the most famous battles of WWI, including the Meuse-Argonne campaign. He survived all the battles, and wrote his parents that he would be back soon. Two weeks later, his parents were notified that he had succumbed to pneumonia in a French hospital.

Thomas F. Durbin is the namesake of Disabled American Veterans Chapter 70. He was an Escondido resident and student at Palomar College. He was drafted into the Army in 1967, and was sent to Vietnam as an infantryman with the 4th Infantry Division on July 25, 1967. Less than two months later, he was killed by hostile small arms fire. Said Foster, “Thomas Durbin died in Quang Tin, South Vietnam on September 21, 1967 and is buried on these hallowed grounds. If you happen to go the Wall in Washington DC, you’ll find his name on Panel 26E – Line 101.

Foster asked the family members of veterans buried to stand and were then given the opportunity to place their wreaths upon their loved ones’ graves first.

Foster concluded, “We have 290 wreaths this, our first year. We hope that, in the coming years, we’ll have wreaths for every veteran laid to rest here. For this year, we have marked the graves of veterans with a US flag.

“Remember, we are not here to remember our veterans’ deaths, but their lives. Each wreath is a gift of appreciation, from a grateful America.

“These live balsam wreaths symbolize our honor to those who have served and are serving in the armed forces of our great nation and to their families who endure sacrifices every day on our behalf. To our children, we want you to understand the freedoms you enjoy today have not been free but have come with a cost that someday, you may have to pay yourself.  As a nation standing together, we can defeat terrorism, hatred and injustice. Thanks to our Veterans, we have the freedom to do just that.”

Loretta Cook gave the benediction, followed by the playing of Taps by Charles Neumann of Bugles Across America. 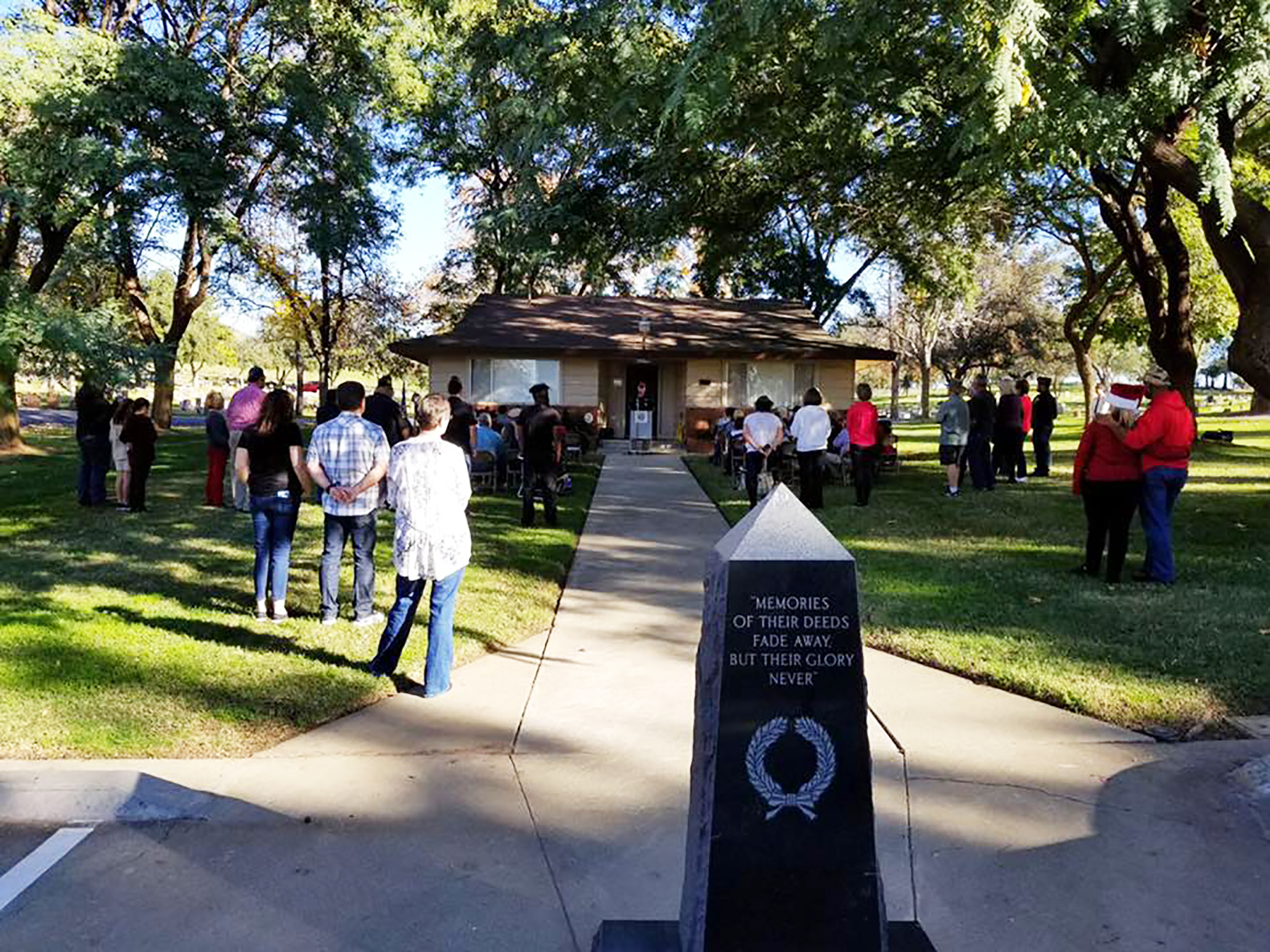 Attendees at the 1st annual Wreaths Across America observance in Escondido. 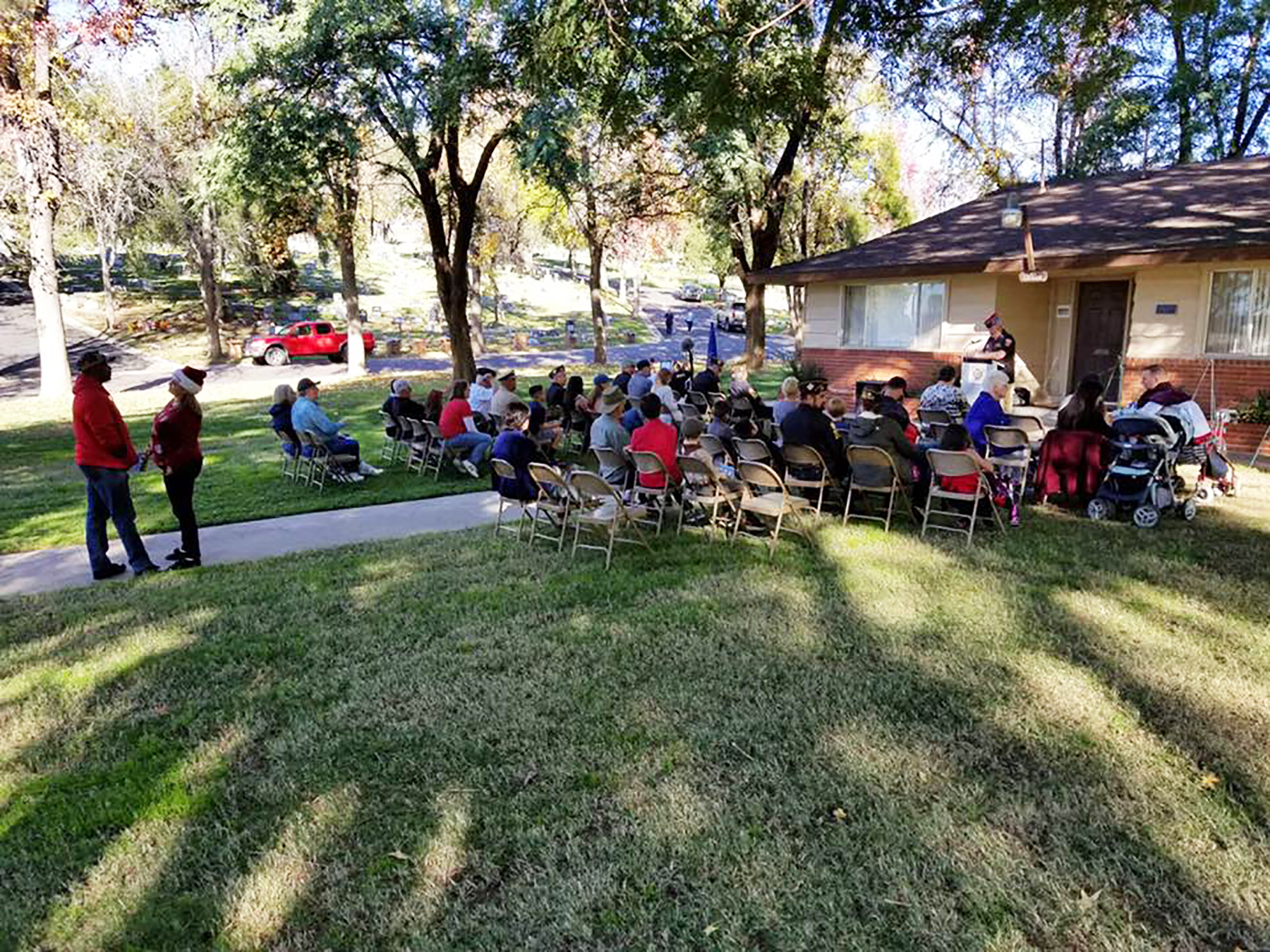 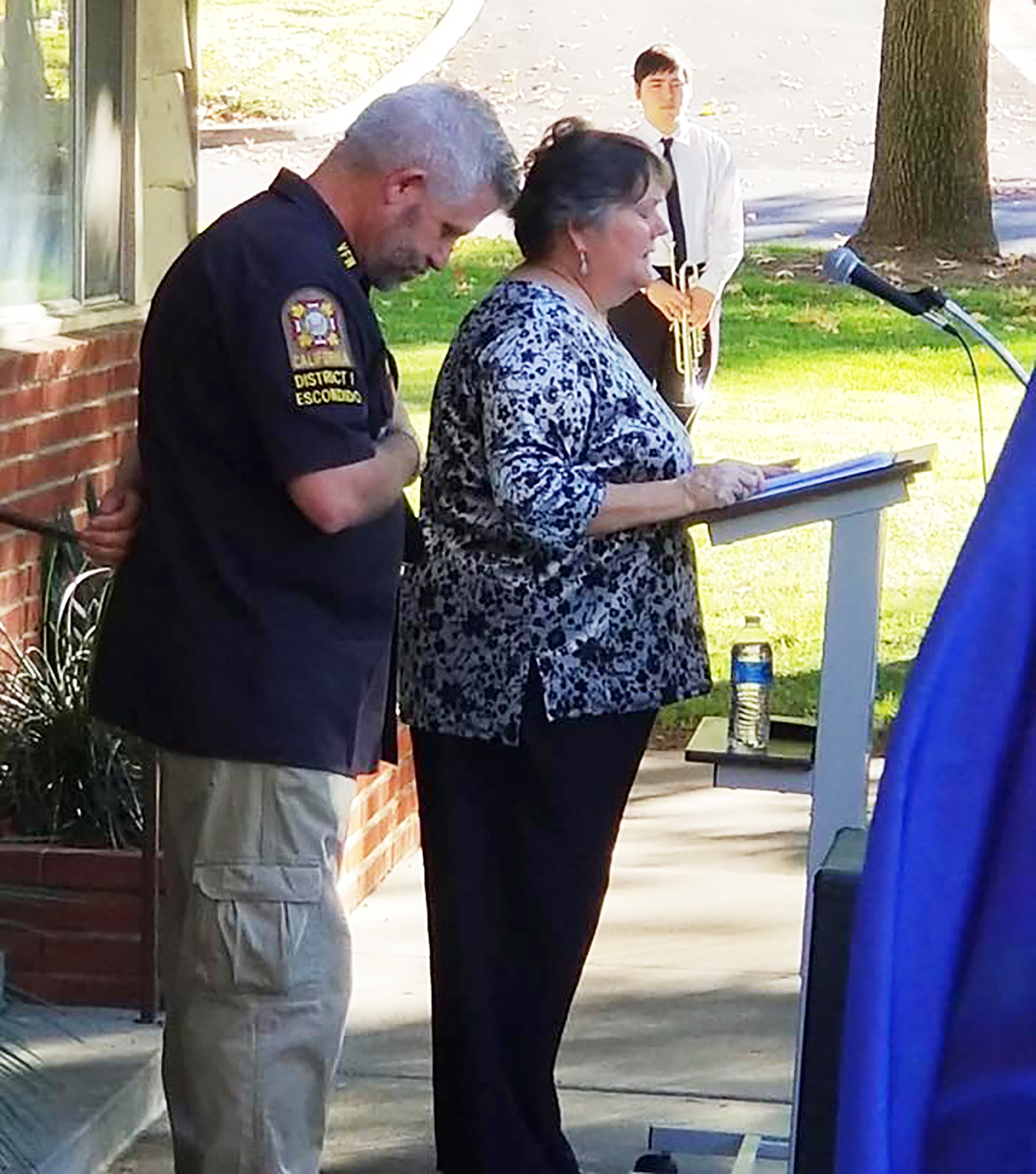 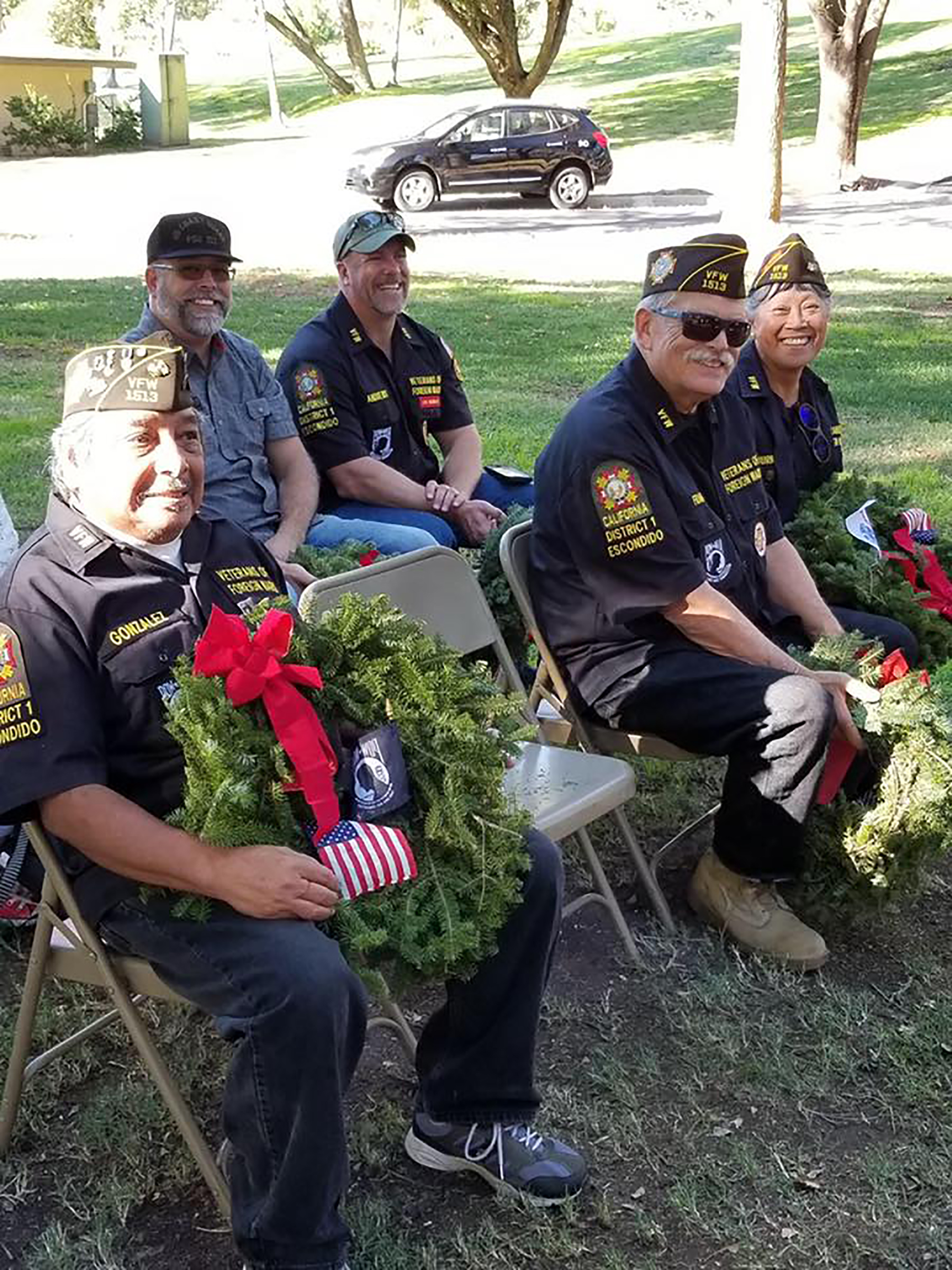 Veterans with wreaths they placed during the Wreaths Across America observance. 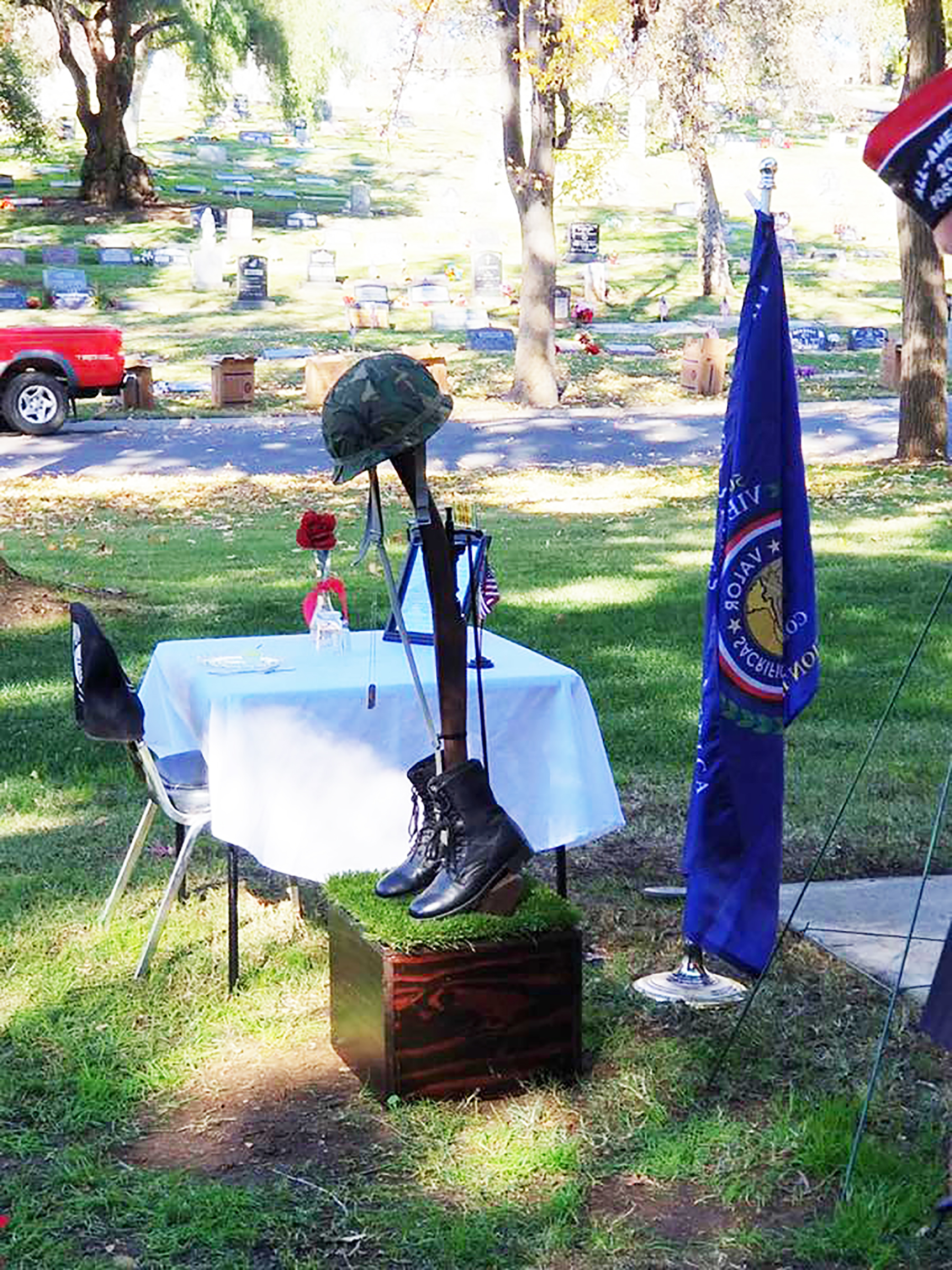