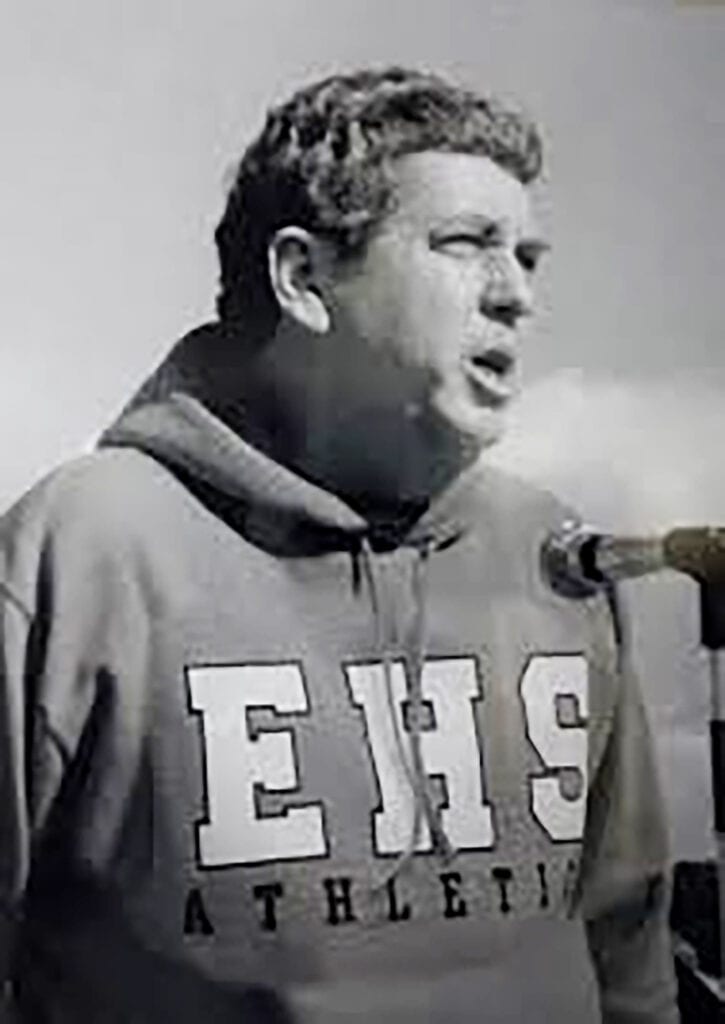 George Cordry, a tireless supporter of all things Escondido, was best known for his love of sports, especially those at Escondido High School.

Cordry, an only child, was born in 1934 in Charleston, West Virginia. The family moved to Chicago and then to Sierra Madre before making Escondido their home in 1948.  He started Escondido High School as a freshman and graduated in 1952.  He demonstrated a love of sports by playing basketball for four years and being selected captain and All-Metro League his junior year. He also played tennis for four years.  With a “wicked” knuckle curve, George was best known for baseball and earned MVP honors his junior year. His co-curricular participation at Escondido High also included Key Club, Cougar Knights, Student Council, Junior Statesman, Public Speaking Club and Drama Club.

After briefly attending San Diego State, Cordry transferred to Palomar College and continued his success in athletics as a member of Palomar’s basketball team and as a pitcher on the baseball team, earning All-Conference honors for two years. In 1955 Cordry earned an A.A. Degree.

Because of his interest, love and success in sports, Cordry wanted to be a coach, but was offered a job being a freelance sports reporter.  His focus changed to journalism, where he found success and a new passion, and was hired as a sports reporter for The Times-Advocate in 1955.   Except for two years in the Army, he worked at The Times-Advocate until 1984 as a reporter, sports editor, City Hall reporter, city editor, columnist and managing editor.  After he left the Times-Advocate, he and Ron Kenney started a weekly local newspaper called The Reporter.  Leaving the newspaper business, George served as Public Information Director, Executive Director of the Palomar College Foundation and chairman of the Alumni Association.  In 1986 he became the first Director of Development for the Palomar-Pomerado Health System.

The love Cordry felt toward Escondido High School is legendary.  He led the campaign to replace the stadium lights, to have the football field named for Coach Chick Embrey, to help found the Cougar Athletic Booster Club, and was inducted into the Cougar Hall of Fame in 2005. He had an encyclopedic knowledge of all players, teams, coaches, and records of Escondido athletics, and was always willing and eager to share this information.

Beyond his love for Escondido High School, George Cordry loved this community and “could never say no when it came to helping Escondido.” He belonged to the Jaycees, the Escondido History Center and was also instrumental in the formation of Escondido High’s 50 plus Reunions. He was also selected Grape Day King with his wife Shirley as the Queen.