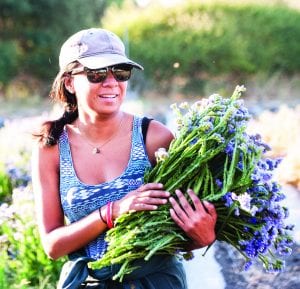 Belen Castillo gathers flowers for the universities’ 70th float in the Rose Parade.

Belen Castillo, a 2014 graduate of Escondido High School, is involved with Cal Poly universities’ 2018 Rose Float entry, “Dreams Take Flight,” that will be seen in person by several hundred thousand at the 129th Rose Parade on New Year’s Day — and 100 million more on national and international TV.
Castillo is in charge of decorating the schools’ milestone 70th float during Deco Week, which runs from Dec. 26-30.
“Dreams Take Flight,” designed and built by teams of students from Cal Poly San Luis Obispo and California State Polytechnic University in Pomona, invites onlookers to take flight on the airplane wings of a trio of cuddly critters — a koala bear, sea otter and red panda. It celebrates the 2018 parade theme, “Making A Difference,” honoring those individuals who act in selfless, generous and kind ways to benefit others.
The 21-year-old Castillo is a Forestry and Natural Resources major at Cal Poly’s College of Agriculture, Food and Environmental Sciences. She expects to graduate in the fall of 2018.
She was attracted to the college’s small-town feel, “and the scenery surrounding the city offered hikes and adventures. For the school, I liked the small classrooms, and the College of Agriculture, Food and Environmental Sciences at Cal Poly is highly respected.”
She is the decorations chairman for the San Luis Obispo campus for the Rose Parade float. This is the fourth Rose Parade float she has been involved with.
She joined that group because of the people and the “hands-on experiences” she was able to experience. “When I was a freshman trying to pick what club to join, I was blown away by the family feel I felt with the Rose Float Program. Everyone was very supportive and willing to teach me anything I was interested in. To this day, the people in this program are some of my best friends.”
It’s hard for her to put her finger on what experience working on the float stands out as the best. “I can think of countless experiences while driving to Pomona or Pasadena during carpools and laughing the whole four-hour drive, or when we do Secret Santa during Design Week. I have a wonderful time with this unique and passionate group of people — it was hard to choose my favorite.
“But if I had to, I would say my best experience I had while working on the float was Decorations Week my freshman year. I was a super-volunteer at the time and got to do whatever I wanted to help decorate the float. I was able to care for flowers and place them on the float, while also getting to know the members of the program. Decorations Week that year was why I wanted to join the Decorations Team and later be its chair.”
Castillo adds, “I look forward to teaching the newer leadership team members about Decorations Week. I am a senior now, and I am realizing my time in Float is coming to a close, so it’s time to pass the torch and teach the new generation of float builders all the lessons I have learned. I am excited to teach the newer members about the fun and excitement that comes with Decorations Week.”
As Monday, January 1 approaches, she says, “I am looking forward to seeing what our team has worked all year to create. All the hours we put into this project throughout the year will finally be complete and showcased to the world. I know it will be a wonderful feeling to watch the float turn TV corner, and I plan to cheer to the top of my lungs that day.”
“Dreams Take Flight” is among 44 floats in this year’s parade.
It is the culmination of a yearlong process that began last January. The concept was selected from more than 100 ideas submitted by students, local communities, alumni and friends of the Cal Poly Rose Float program.
The 18- by 54-foot entry uses animation to breathe life into its trio of amiable aviators as they swoop and sway amid the clouds. Paula the Koala, the largest element on the float, flies a striped-red biplane, controlling the craft’s flaps, rudders, ailerons and elevators, as she glances between the sky and the audience. She leads Ollie the Otter’s seaplane, which emerges from a cluster of swirling clouds, while Rusty the Red Panda soars behind, banking left to right, some 28 feet above the float.
The design includes a nod to Cal Poly’s rich history dating back to the 1949 parade. Stamps of past Cal Poly universities floats are depicted on the planes in tribute.
During Decorations, or Deco, Week — Dec. 26-30 — in Pasadena, the float will be adorned by students and community volunteers with a bounty of more than 42,000 colorful blooms — nearly all grown in California. There’ll be roses, Gerbera daisies, irises and mums — lots of mums: chrysanthemums; yellow and green button mums; and orange and purple cushion mums.
The schools enjoy a storied history among parade participants.
Cal Poly universities has reached the 70-year mark —the sixth highest number of appearances — with “Dreams Take Flight.” Since the inaugural effort in the fall of 1948, students from San Luis Obispo and Pomona have come together across 240 miles to produce a float — one of only six self-built entries — for Pasadena’s signature event. A symbol of the partnership between the campuses is the float’s chassis, whose front and rear halves are joined mid-October each year in Pomona to officially unite both the float and the teams.
Over the years, the Cal Poly entries have earned more than 50 awards, including the Founders’ Trophy in 2017 for the most beautiful float built and decorated by volunteers from a community or organization.
In addition, the scale and scope of the entries has burnished the school’s reputation among float builders for creativity and ingenuity. The program has received countless accolades for introducing innovations into its float designs including computer-controlled animation, hydraulic systems and cleaner emissions with propane.