Escondido group learns about the battle to preserve vote integrity 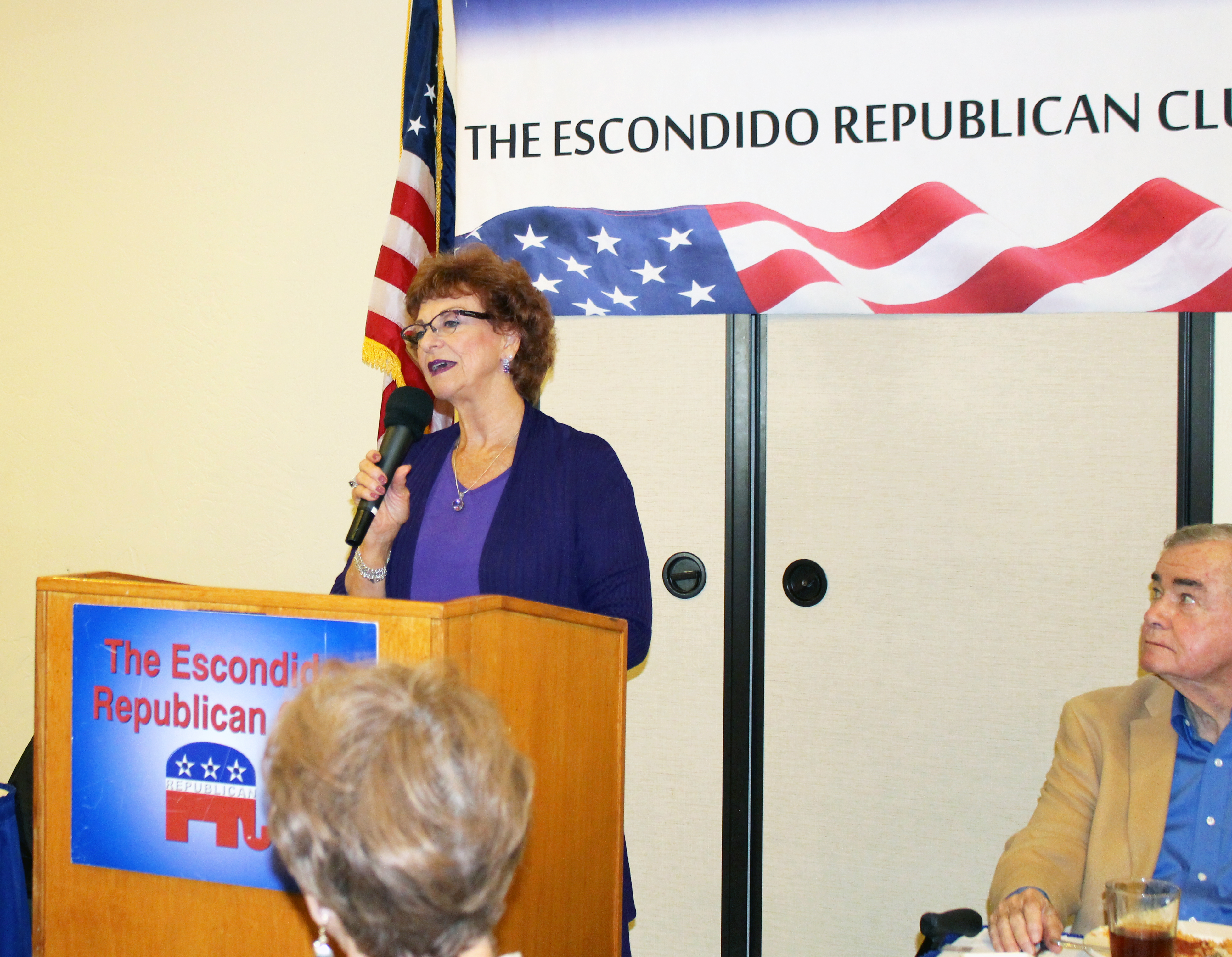 The Election Integrity Project is a nonprofit, nonpartisan 501(c)3 that was founded in California more than nine years ago. “I can’t come to you wearing a partisan hat, but I can give you enough information to do what you will,” she told the group. “I could give a day of seminars and not even break the surface of what we have done in nine years of documentation and research.”

Weiss said she had recently attended a celebration on Midway museum of the 50th anniversary of the “Top Gun” program. Almost every flyer who ever participated in the program attended and that she was in a group of only a few civilians who attended.

“It was inspiring to see how the military responded when we were absolutely the worst in the world in air to air combat,” she said. “In a few years they were able to turn that around and now they are celebrating that. It was just amazing!”

She said she was jet-lagged because she had returned from long trip to Washington D.C. with a “group of conservative minds who are deeply concerned with the Constitution to continue as it was intended by the Founders, and to keep it alive.”

She said, “I challenge you to never let anyone get away in your presence with saying that ‘this government is a democracy,’ without correcting them.” She added, “We are a republic. A democracy is two wolves and a sheep deciding what to have for dinner. The lamb doesn’t have a chance. That’s fifty percent of the population, plus one, being able to tell the rest of the population to go home and shut up.” We are a republic, she said, “Where we have a say and to have our opinions respected and protected even though we may be in the minority position.”

To some laughter, Weiss asked, “And what type of government do we have in California?”

She noted that the U.S. Constitution [Article 4, Section 4] requires states to have a “republican form of government” and California is no exception. “With the same protections for a minority point of view.”

However, she said, “California is not. California is operating as a socialist world view oligarchy. Those of us who have a minority view, no matter what that view is, whatever part of life you disagree with, if your position is a minority position you are not protected any more in California.”

A goal of Election Integrity California is to file an Article 4, Section 4 lawsuit “so that we can go through the courts and challenge California law where it doesn’t give us the right to be governed as a republic,” she said. “We will see where that gets us, but it’s a big goal. We really believe we need to challenge the federal government to enforce the constitution on the state of California. To say, ‘You need to allow California to have a republican form of government.’ ”

One of the biggest blows to a “California republic” “was done by the people themselves out of stupidity,” said Weiss. That was the “jungle primary” Prop. 14 that allows the two top vote getters in a primary—even if they are from the same party—to be on the ballot of the general election. “That was a huge blow to the republic, because we no longer have a republican election.”

“We are guaranteed that a large number of the voters will never have a candidate on the general election ballot that reflects their point of view.” she said. Green parties, independents, libertarians “will never, ever have a candidate on the general election—and they should.” In many places in California there are two Republicans on the same ballot, or two Democrats, with no opportunity for the other party. “That is a very big way to create voter suppression,” she said. “Because if you know no one is on that ballot you can in good conscience put your dot by, you will stay home.”

This is a form of voter suppression, “forcing everyone into one single direction. The republican form of government requires that everyone who has a voice be allowed to have a voice.”

Another attack on the republican form of government, she said, is a crisis created by the fact that it is becoming impossible to follow the progress of a bill in the legislature in time to influence its passage.

A process called “gut and amend” allows a bill that began with a name and content to be stripped of its verbiage—but not its name. “They don’t even need to keep the subject matter,” she said. This allows a bill labeled one thing to be passed with different content.

The chaos is exacerbated by the fact that on the last day of the legislative session members may vote on as many as 900 bills.

Although all members’ votes on bills are recorded, a member can go back after the bill’s fate has been decided and change his or her vote for the record. In this way, a lawmaker can avoid being held responsible for voting for or against a bill.

Unless their constituents monitor them. “We have people attend to record how they vote. They need to know they are being watched,” said Weiss. “That’s what’s called keeping a representative honest.”

Another threat to the California republic is continuing pressure on voter integrity. Recently Judicial Watch singled out California as “as the worst offender for election integrity, by having more people on the rolls than were eligible to vote.”

California’s various initiatives to extend the vote and make it as easy to register as possible, are overloading election officials on election day.

If the process is dragged out, as it is if voting begins two weeks before the official election day and collection and counting of votes continues for days if not weeks, “it distances voters from the election. By the time we know the results of the election, we don’t care,” she said.

“Many people looked at the results on election night but were surprised who later won.”

This was the case in the Escondido mayoral election last November where the incumbent was narrowly leading on election night, but saw his lead vanish and then reverse itself as late arriving and provisional ballots were counted over the next two weeks.

But that election was not an outlier in California. So pronounced was this phenomenon that former Speaker of the House Paul Ryan called it “bizarre” and said the Golden State’s election system “just defies logic to me.”  He added, “We were only down 26 seats the night of the election and three weeks later, we lost basically every California race. This election system they have — I can’t begin to understand what ‘ballot harvesting’ is.”

Ballot harvesting, noted Weiss, strikes at the base of the secret ballot that has long been the bedrock of the American electoral system. Changes in state law two years ago made it possible for anyone to collect a ballot and deliver it to the Registrar of Voters, when previously only a close relative could do this. “It removes the chain of custody,” she said.

“Voting by mail is not a secret ballot,” observed Weiss. “They can go into your record. You want to avoid voting that way.” She added, “We have lost the votes of our most vulnerable people.” The vulnerable voters are those who can’t cast their votes in person and so must hand over their ballots to others.

This creates the possibility for abuse. If the person collecting the votes knows that the ballot they are collecting might vote for the “wrong” candidate. Or if the ballot isn’t sealed completely, so it can be opened and perhaps unmarked boxes can be marked before they finally get to the registrar.

Another abuse of the system comes when someone not legally able to vote shows up and claims to be someone who is registered. Since no form of ID is required, this creates a possibility where someone casts a vote for someone else, who may then later cast a vote. In the case of two ballots cast for the same name, both will be disqualified.

“Citizen votes are being diluted by people who are not a member of the club yet,” said Weiss.

She criticized efforts to lower the voting age to 17 (“The brain doesn’t develop until 25”) and the move to allow convicts still serving time in prison to vote.

Weiss reported that in 2018 “thousands did not get their mail ballot. So that many cast provisional ballots. Many didn’t vote at all. Hundreds of thousands found that their registrations were altered without their consent. Doesn’t that fit the definition of voter suppression?”

She added, “Anyone who has interacted with the DMV may have had their registration changed without them knowing about it.” State law requires that anyone getting a license renewed or otherwise dealing with the department is automatically registered or re-registered. The DMV has helped create some of the duplicate registrations, said Weiss.

The voting system in California last year created an “unprecedented” number of provisional ballots. “On election night there were 250,000 ‘harvested’ ballots in Orange County alone,” she said.

Her organization is putting together an effort to force the state of California to hold an “audit” of registered voters. “We want to look at how many provisional ballots and vote by mail ballots had the same name,” she said.

The idea is to look at the provisional ballots, which are still preserved, and compare names to people who say they never got their ballots mailed to them.

“If you never got your ballot in the mail, you have no idea if your ballot will be remade and someone else will vote claiming to be you,” said Weiss.

“We will need to up our game,” said Weiss. “We are training people to be observers of the counting process.”  People who might be tempted to alter existing ballots are much less likely to do that if they know eyes are on them at all times, she said. “During the sixty day election cycle, we need our eyes on every second. When you see a signature that doesn’t match, you’ve got to challenge it.”

Find out more by visiting EIP-CA.com, where you can sign up for legislative updates and other information.