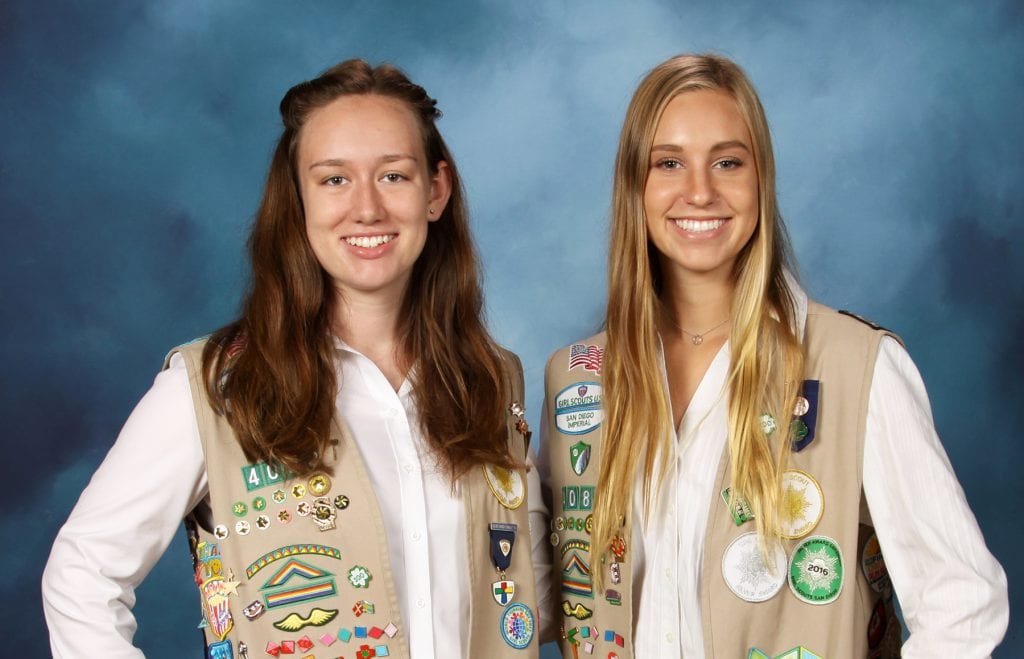 Girl Scouts Paige Zimmerman and Sofia Christensen, both of Escondido, have earned the Girl Scout Gold Award, the highest achievement in Girl Scouting.

Gold Award Girl Scouts demonstrate extraordinary leadership by identifying and tackling social issues. Each candidate spends one to two years developing and implementing projects with sustainable impacts in local and global communities. She addresses the root cause of a problem, builds and oversees a volunteer team, meets measurable goals; and positively influences people’s beliefs, attitudes, assumptions and behaviors.

Sofia Christensen and Paige Zimmerman were both members of Troop 4082, and Paige’s mother, Sabrina, was their troop leader. Both girls previously both earned their Bronze Award as Juniors and Silver Award as Cadettes.

For her Gold Award project, Sofia planned and facilitated a series of workshops to empower elementary and middle school girls. After noticing many girls struggling, she sought to positively shape girls’ self-awareness of the effects of societal impact on well-being, including addressing misconceptions and stereotypes associated with gender roles. Her goal was to promote inner beauty, build confidence, and share knowledge about how to prevent bullying.

Sofia is about to enter her senior year at San Pasqual High School, where she is a member of the Varsity water polo team.

Paige’s belief that every child should have the opportunity to be creative with art led her to developing a series of workshops for underserved children. Many schools have eliminated art programs, so she created an opportunity for children to learn the fundamentals of art and discover if they have an interest in potentially pursuing this subject.

She learned she has a passion for mentoring, which has inspired her to become a mentor for classmates at school, younger Girl Scouts, and, through the Sister Project, help prepare middle school girls for high school. She was thrilled to combine her love of art with mentoring to make a lasting change in her art students.

Paige is entering her senior year at Escondido Charter High School, where she is a member of the varsity volleyball team. She was named California Scholar Athlete of the year. She received the 2018 Lifetime Achievement Award for selling over 5,000 boxes of cookies, and was selected as the regional finalist in the Technovation Challenge. In addition, as one of 25 Emerging Leader Girl Scouts of 2018, she participated in Girl Scouts San Diego’s Cool Women luncheon and mentoring session in April. Paige is a second generation Girl Scout.

Girl Scouts is a leadership development organization for girls. Through programs focused on the outdoors, STEM, entrepreneurship and life skills, Girl Scouts prepares girls for a lifetime of leadership, success and adventure in a safe, girl-focused space. All girls in grades K-12 and adult volunteers are welcome join Girl Scouts any time during the year. For more information contact Tracy Browns, 619-610-0774 or tbrowns@sdgirlscouts.org.