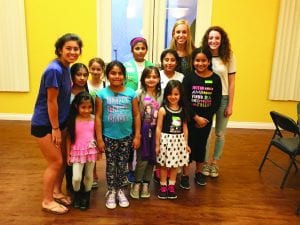 Sofia Christensen (blond girl in the back row) with some of the participants in her workshops that were designed to empower girls and combat negative stereotypes.

Sofia Christensen, a Girl Scout, resident and student in Escondido recently earned the Girl Scout’s highest award, the Gold Award, for her project: a series of workshops designed to empower and build up the confidence of girls ages 6-13.

She told The Times-Advocate: “Throughout the workshops I aimed to empower the girls and build up their confidence to inspire a next generation of confident girls who not only understand how to achieve success, but pursue a successful future. I addressed self-image in an attempt to inspire confidence and get rid of their self-doubt.

Her second workshop focused on “ideal beauty,” where they discussed how Photoshop and models in magazines can change perceptions of beauty.

“The third workshop was called ‘Like a girl.,’ ” said Sofia. “It was inspired by an Always commercial where the address that ‘…like a girl’ is negative, such as ‘hit like a girl,’ ‘run like a girl.’ We talked about that it doesn’t have to have a negative connotation.”

Her fourth workshop addressed jobs and careers and what it takes to achieve a successful future such as staying in school, doing homework and going to college for some careers.

Sofia’s final workshop was about bullying, how to deal with it, and stand up to it.

She said, “I did each of these workshops twice with different groups of girls. Overall, I spent over 100 hours planning and hosting these workshops. I also involved three of my peers to be volunteers at the workshops.