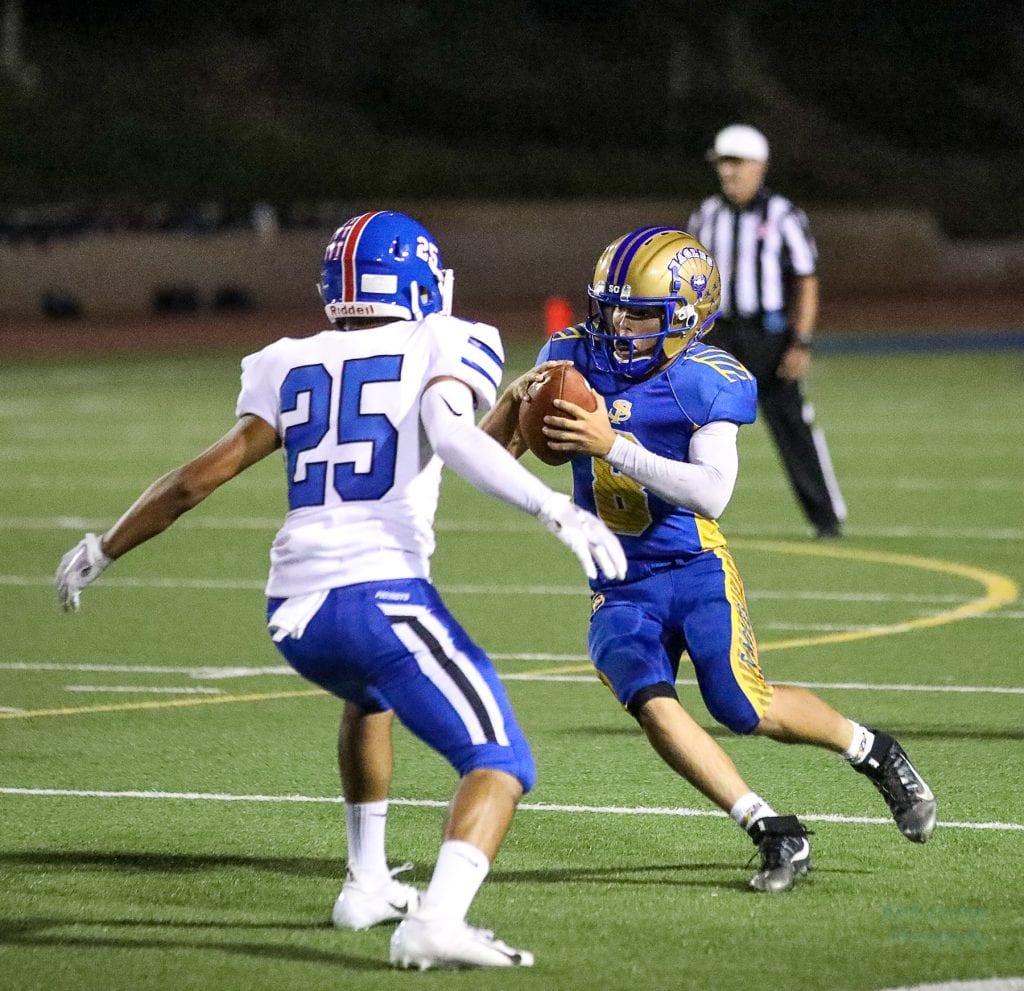 Let’s take a drive-by look at the local prep football scene as most of the squads head into the home half of the season.

Calvin Christian – The Crusaders (2-3) dropped back-to-back games for the first time since  2014 when they were stunned by heavy underdog San Pasqual Academy 36-34 last Friday. CC’s defense, which has already yielded 176 points, will need to tighten up if the Crusaders are to have realistic ambitions of being a bona fide factor once the playoffs roll around. The ground game, which is a CC staple, must have workhorse back Evan Senti excelling if the offense is to be at its best.

Classical Academy – After losing their opener, the Caimans have been on a decided upswing having won four games in succession. Though the offense is percolating, the defense has been extraordinary of late while pitching three straight shutouts over O’Farrell Charter (56-0), Escondido Charter (55-0) and Maranatha Christian (37-0).

Plus, as long as junior quarterback James Duncan and shifty running back Damian Castaneda continue to deliver, the Caimans should be able to put plenty of points on the board.

CA has an intriguing intra-city match-up with another team on the rise in Orange Glen this Friday night. In a game with fascinating ramifications, the victors could be well on their way to a most notable season.

Escondido – The Cougars (3-2) kicked off their Valley League schedule with an impressive 56-17 triumph against overwhelmed Fallbrook six days ago. Coug quarterback Robbie Ramos was the catalyst for the win as he punctured the Warrior defense for 172 passing yards and a pair of touchdown tosses in addition to gaining 63 more yards on the ground.

There’s no doubt that Esco has the potential to be potent when it possesses the ball but this week it’s the Cougar defense that must man up in a pivotal home game against a Rancho Buena Vista team that features one of the County’s topflight running backs in Dorian Richardson (1,291 yards, 12 TDs).

If the Cougars can get the best of the Longhorns, then suddenly they’ll have the look of legitimate contenders for a VL crown.

Escondido Charter – On paper, it looked like the numbers-challenged White Tigers (1-4) would be hard pressed two Fridays ago to keep things close versus surging Classical. Not surprisingly, that’s exactly the scenario that played out in a shutout loss.

Things don’t get a whole lot easier for EC this Friday when it takes on a Tri-City Christian squad from Vista that has produced 195 points and lost just once in five outings.

Orange Glen – Showing a resiliency that had to delight their engaged head coach Jason Patterson, the Patriots (4-1) rebounded nicely from a loss to neighbor San Pasqual with a solid 19-7 road conquest of Army-Navy. In that tilt, stellar runner Jason Patterson loomed larger than King Kong with a massive 258-yard, three-touchdown performance. On the defensive side, rugged linebackers Julien Lesa (7 solo tackles) and Ruben Ramirez (8 total tackles) combined with defensive back Tristen Smith (2 INTs) to keep the Warriors effectively in check.

Next up for the Pats is a team in Classical Academy that mirrors them as it relates to having had a very successful season to date. Obviously, something will have to give in a game that might be the most interesting confrontation between Escondido-based prep teams thus far this season.

San Pasqual – The Golden Eagles (3-2) were perhaps able to relish in their 37-14 Battle of the Bear win over Orange Glen a little longer than normal since it preceded a bye week. But now it’s back to the grindstone as SP travels to challenging Ramona (3-2) for the first Valley League game for both clubs.

If quarterback Trevor Jungman, who can both dish and run, plays anywhere near the level he displayed against the Pats, the G. Eagles should be in great shape. Expect defensive ringleader Johnny Vega to deliver another stalwart performance from his linebacker spot.

San Pasqual Academy – In what had to rate as one of the program’s most important victories since 2008, the Dragons (1-1) sprung a memorable upset when they downed a Calvin Christian team that has been an 8-man heavyweight over the past several years.

And this coming from an independent school that lists just a 15-man roster according to MaxPreps, plays only a four-game schedule and didn’t even field a squad in 2017.