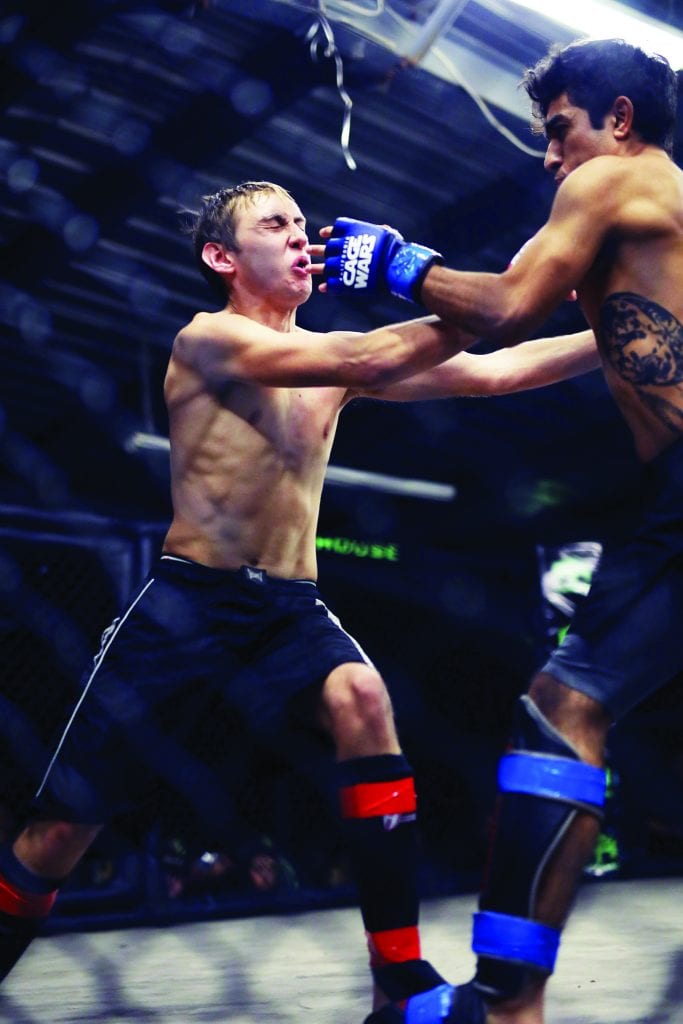 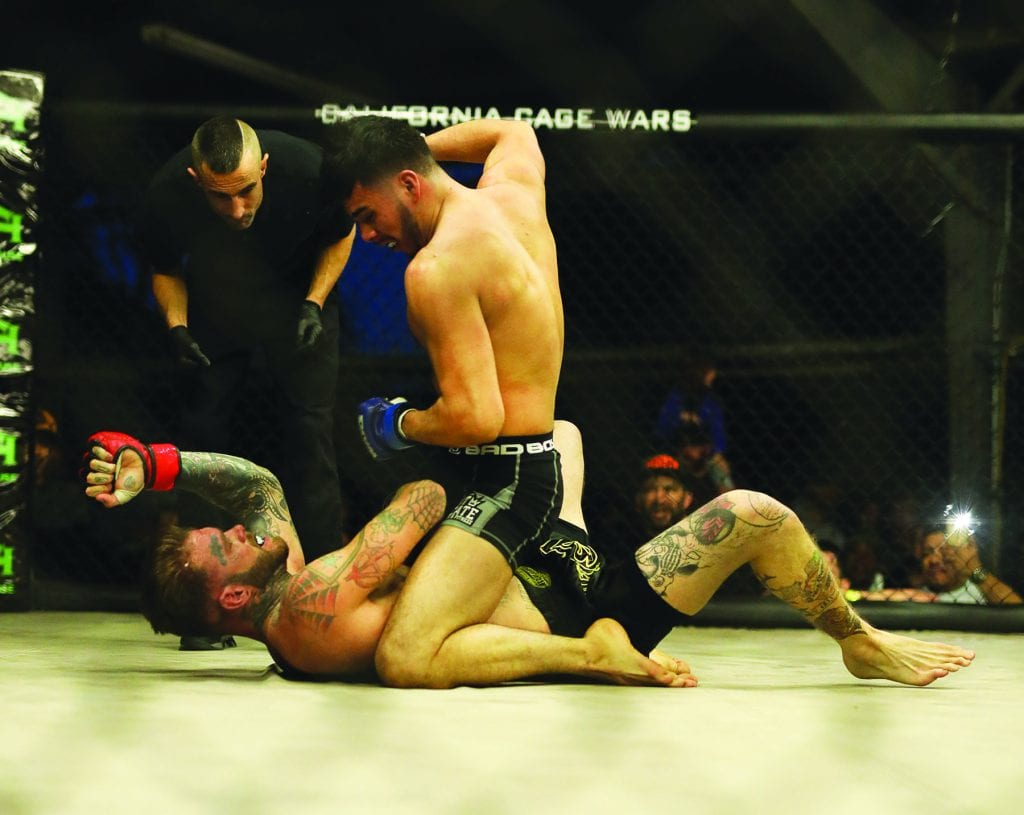 Sean Horner, competing out of Escondido, dominated his bout en route to a 1st round TKO triumph over Climmon Kessee. 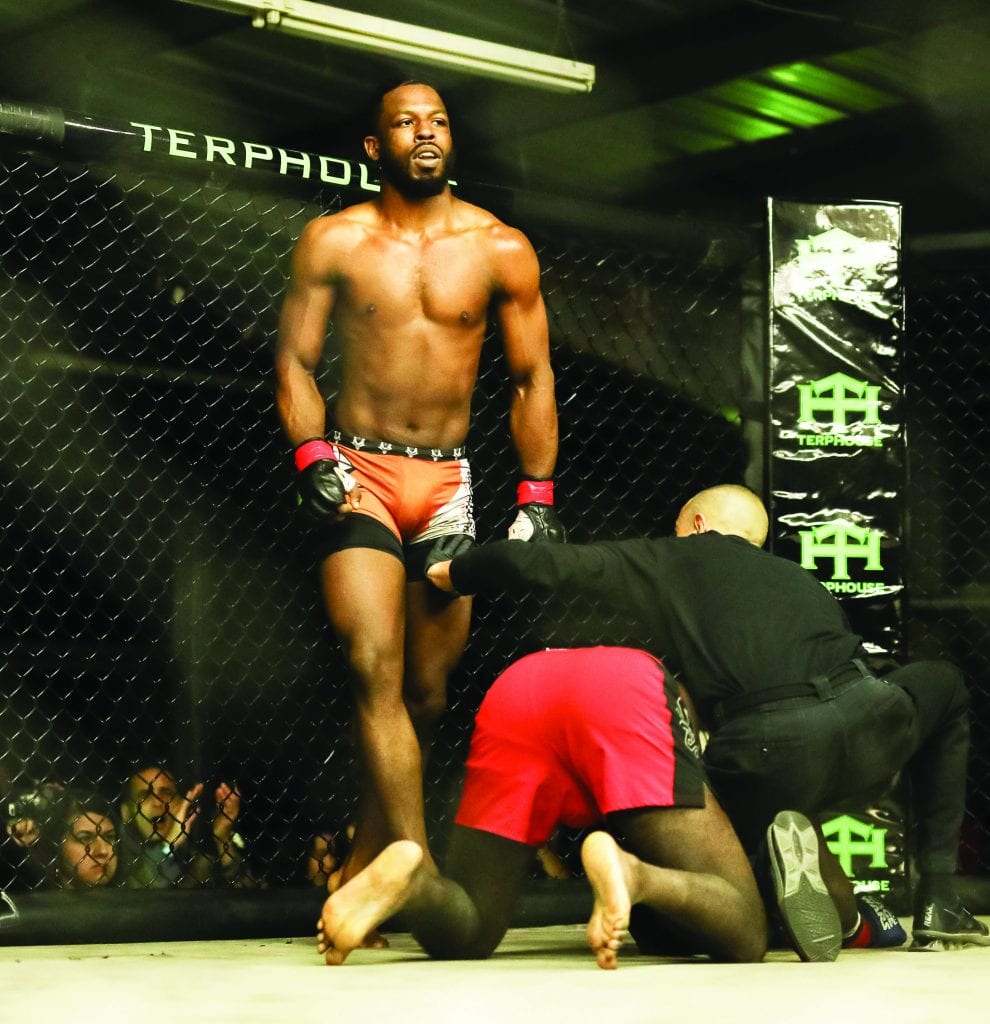 Local Geoff Ross stands victorious after he forced his opponent Rhageem Wells to tap out in the first round.

When the fighters on the card squared up for matches on Sunday, January 7, things looked promising for the third installment of California Cage Wars. The event, promoted by majordomo Joseph Phebus, took place at a pavilion on tribal land up the road apiece in Valley Center.

Plenty of good fights were scheduled, with more than a few local fighters from the city of Escondido due to participate. Fighters making their amateur and professional debuts were pitted against seasoned veterans of the cage, both sides making off with an equal amount of the glory.

The very first fight featured Escondido heavyweight Sean Horner as he faced off against Climmon Kessee, with this being Kessee’s first fight and Horner’s second. This fight set the tone for the rest of the event, with Horner emerging victorious with a 1st round TKO after dominating the fight with a takedown and vicious ground and pound.

One of the fights that featured a pair of Escondido combatants was arguably one of the hardest fought, closest matches of the entire evening. Anthony Porter faced off against Marcos Vasquez in a heavily contested bout of skill and strength. For both men, this was their first official fight and by virtue of a unanimous decision by the judges, Porter came away with a narrow victory.

This fight was one of only five matches that lasted more than one round, and the only fight that was decided by decision. Other odd statistics from the card shows that more than one fight ended up being cancelled due to a variety of reasons. In addition, of the 12 fights that only lasted one round, 8 of those fights were ended by the referee, to avoid potential injuries.

Despite these precautions however, injuries still occurred. Competitor Raul Garcia suffered an injured arm after waiting too long to tap out against a perfectly locked inverted armbar executed by William Carey. Christopher Bechtold was unable to answer the bell for round 2 due to chest pains, and veteran fighter Miguelito Marti took a forceful flying knee to the face that landed on his eye socket. Just goes to show that accidents happen even under the most precautionary of circumstances.

Not all competitors from Escondido were able to come away with the W, however. In his debut fight, Tyler Thornton lost to the mountain of muscle that is Josh Bird in a heavy-handed TKO in round 1. Escondido representative Kiwi Villanueva also lost by TKO in round 1 to Angel Guarardo. Hopefully both men will view this as a learning experience and not lose heart in their pursuit of victory in the cage.

All of the previously mentioned fighters were fighting in the amateur category, however, one fighter from Escondido was fighting in the professional category. After a long history of fighting as an amateur, Geoff ‘The Boss’ Ross made his debut as a professional in the welterweight division, fighting against Rhageem Wells. Ross suffered a takedown soon after the bell was rung but quickly reversed it, throwing numerous punches and elbows before locking his opponent in a rear naked choke, forcing Wells to tap out in round 1.

One response to “Escondido fighters prominent in recent CCW event”