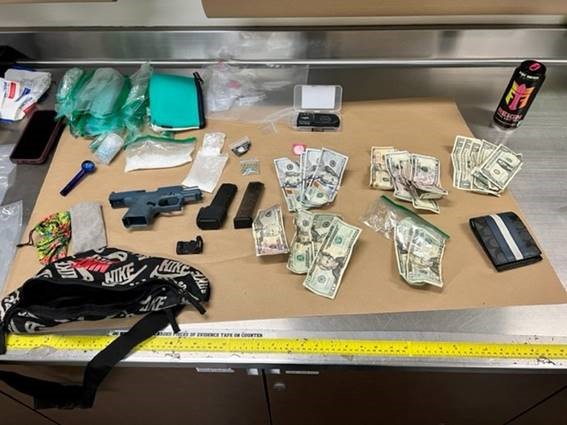 FELON WITH GHOST GUN AND DRUGS ARRESTED 10 TIMES SINCE 2020
On May 7, 2022, officers from the Escondido Police Department observed a known wanted felon in the parking lot of 1333 E Grand Ave. The male, Craig Blas, is a 32-year-old Escondido resident who had a felony no bail warrant for a Probation Violation.  Officers formed a plan to safely take Blas into custody.  Upon seeing the uniformed officers, Blas ran from the officers. Officers quickly took Blas into custody and once arrested, Blas was in possession of a handgun magazine, three fake oxycodone pills that tested positive for fentanyl, a pistol red dot sight, and $738 in cash.  Additionally, officers had observed Blas throw something into a nearby car before running. Officers found an un-serialized handgun (or “ghost gun”), 35.85 grams of methamphetamine, 235 fentanyl pills, 3.56 grams of powder fentanyl, a loaded magazine, a digital scale, and baggies consistent with the kind used to package illegal narcotics in the car.  Based on the cash, quantity of drugs, scale, and baggies, Blas was arrested for his felony warrant, being suspected of selling narcotics, being a felon in possession of a firearm and ammunition, and resisting arrest for fleeing. He is currently on PRCS Probation and County Felony Probation.
PRCS stands for Post Release Community Supervision.  The PRCS Act is a result of the passage of Propositions 47 and 57.  This means that offenders released from prison shall only be released to parole if they most recently served time for serious or violent felonies, were serving a life term, are a High-Risk Sex Offender, or are a Mentally Disordered Offender.
Blas was previously arrested for possession of an assault rifle, and short barreled shotgun in 2017 and 2018.  Blas was released on parole in 2019 after being released from prison for drug and gun charges. Since his release in 2019, Blas has been arrested numerous times on parole holds and a variety of other charges.  In 2020, he was arrested seven times for drug possession, weapons’ possession, and fleeing from police as well as parole holds.  In 2021, he was arrested one more time for drugs and weapon charges, including suspected sales of narcotics.  Blas was discharged from parole despite all of these arrests.  He was then arrested for a probation violation in April 2022.
Chief Varso said, “Thanks to the diligent effort of the officers, a dangerous felon has once again been put in jail and his guns and drugs will be kept out of the hands of criminals and off the streets.”