Escondido Farmers Market Santas ready to Stand Up to help give the kids the gift of good health. 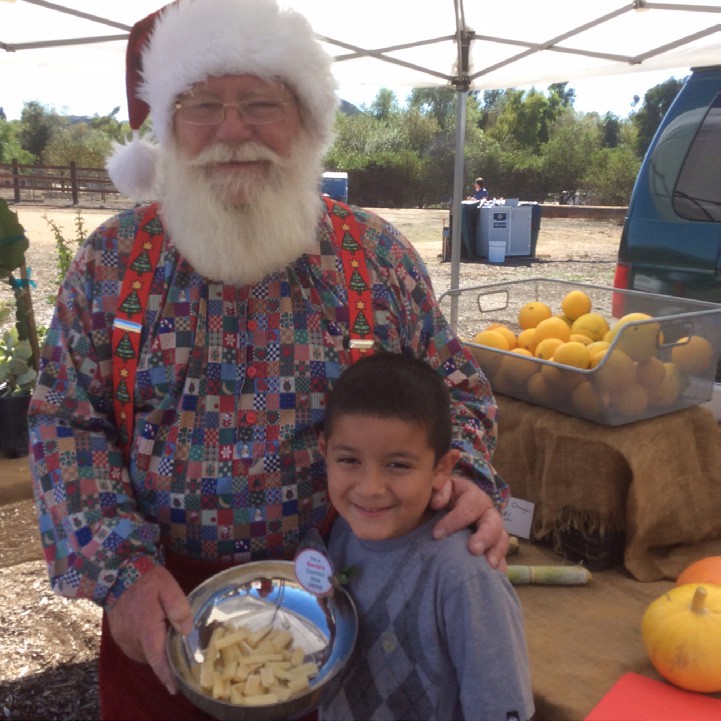 At the Sikes Adobe market Santa Larry guides young Alex Carlos, age 7 to a “Garden Bite” of raw sugarcane, showing him that sugar is a commodity to be added by you, not added by the industrialized food processors who seldom disclose how much added sugar is in their packaged foods. In the Farmers Market children get the chance to taste fresh wholesome fermented cabbage, or Kombucha, or the many other fresh and often probiotic foods available which boosts their immune system keeping them healthy.

Everyone knows the problem, says San Diego based Sustainable Santa, the organizer of a Santa led effort to help children be “healthy happy and fit for life.”

The basically unhealthy diet of Fast and Processed “food” being consumed in America has led to an explosion of preventable, chronic metabolic and other diet driven diseases in our children which were only rarely seen in them 30 years ago. And it’s not just Type 2 Diabetes. It’s everything from fatty liver, bleeding and leaky bowel, high blood pressure and the bad food-driven diseases of cancer and heart disease. It’s also not just limited to those who are overweight or obese, 80% of whom will suffer from these ailments. Some 40% of those who “look healthy” are also afflicted. That adds up to over half the population.

We have been “fed” the myth that the problem is “we eat too much and exercise too little,” says Sustainable Santa. In truth the problem is not the quantity of the food we eat, it is the quality, where “processing” for the sake of shelf life, cost and “convenience” strips out the nutrients and the fiber needed for good body health and good digestion; and adds in chemicals, colors, preservatives, trans fats and huge amounts of artificial sweeteners and added sugar which is toxic at the levels kids now consume them.

For the second year two Santas will be attempting to help correct this problem at the Tuesday night Farmers Market on Grand Avenue, and the Sunday Farmers Market at the Sikes Adobe Historic Farmstead off Via Rancho Parkway in south Escondido. They are part of a group called the “Real Santa’s United to end Childhood Obesity” who for the past few years have been deploying Healthy, Happy Santas into Farmers Markets from San Diego to Sebastopol (above San Francisco).

There, in addition to taking that picture with Santa – which the parents take with their own camera and for which they make a contribution – the Santas gives out “Santa’s 3 Food Rules” cards which last season were supplied by the International Brotherhood of Real Bearded Santas as part of a nationwide Santa led Healthy Children’s Initiative. Mom can put the cards on the refrigerator and follow them all year long. The food rules are designed to wean the kids OFF the fast, snack and processed foods. Then Santa sends the kids into the market on a “treasure hunt” looking for “Santa’s Garden Bites” which are tastes of fresh, raw or fermented REAL FOOD supplied by the farmer vendors.

In addition, the Santas urge the parents and kids to “eat the rainbow” showing them an illustration of how the different colors represent the different combinations of vitamins and minerals within the different veggies and fruits – urging the kids to help cook at least one “healthy” meal each week using their favorite colors. All reds one meal, another color the next. With practice the pattern of cooking a healthy meal using different colors will extend into a lifetime of good nutritious eating.

“It is clear that we Santas need to Stand UP to the promoters of the current unhealthy American diet” says Santa Glen who is the Santa at the Tuesday night Grand Avenue Farmers Market. “We can no longer just Stand by and watch as this tsunami of diet driven diseases continue.”

A big part of the answer is to help the moms and dads, and the kids recognize the importance of “eating Real Food” says Santa Larry from the Sikes Adobe Sunday market. We think Santa can promote this first step in the process needed to “change the eating culture of America” away from the relatively new pattern of eating fast and processed food-like substances, back to the habit of eating real food – the type available at the local Farmers Markets.

The efforts of the Real Santa’s United have drawn support from the doctors at the University of California San Francisco Medical School, through their foundation: the Institute for Responsible Nutrition. For more on this effort and contact information go to: www.responsiblefoods.org/santas

“Parents, bring your children to the Escondido Farmers Markets and let us help you give your kids the greatest gift of all – good health. It’s great fun and very rewarding,” says Santa Glen.