Escondido family puts on a holiday light show for neighbors 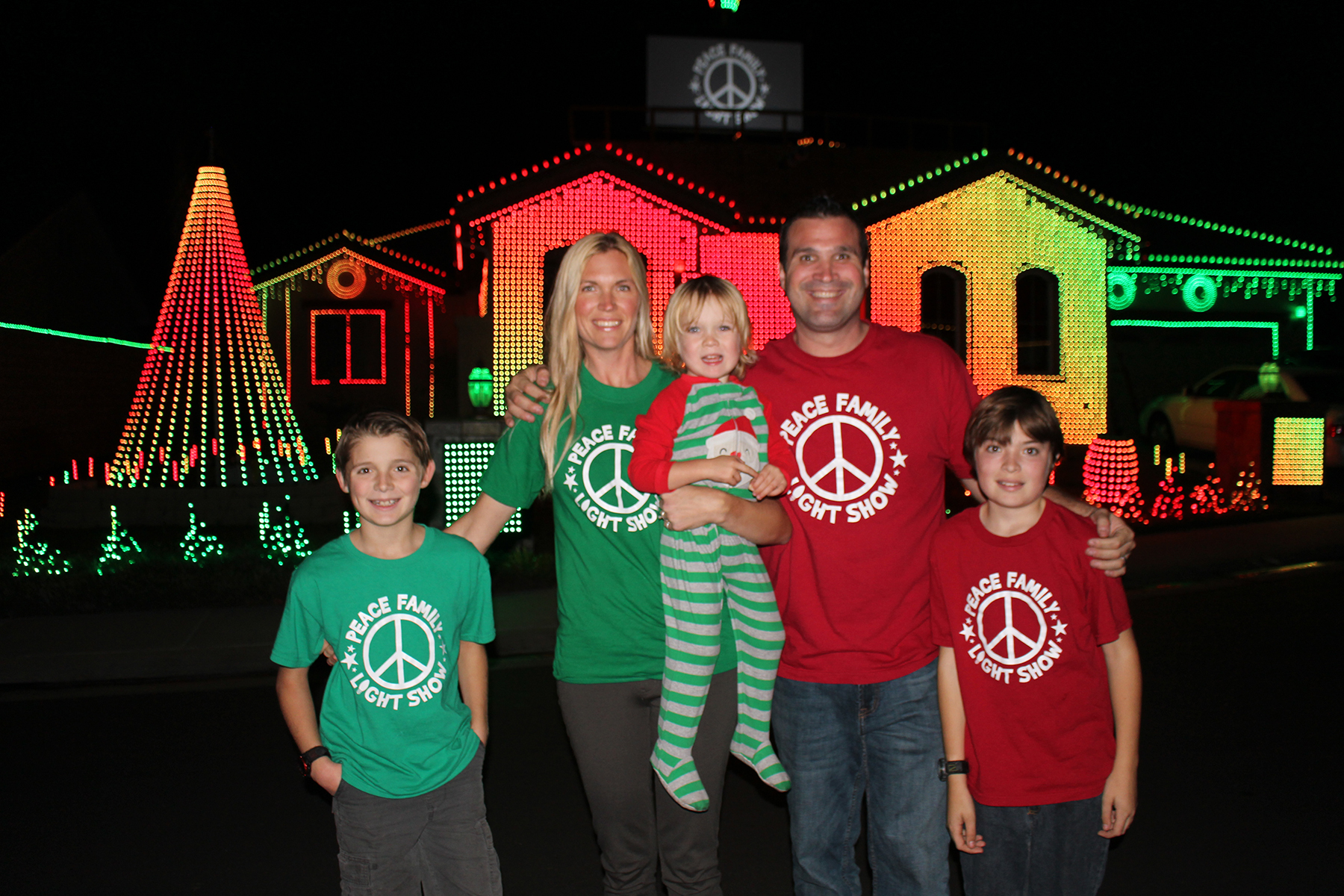 The Peace family in front of the Christmas light display, an 8-minute extravaganza that draws visitors from all over town.

What is more proper this time of year than for a family named Peace to assemble one of the most spectacular Christmas lights shows ever seen in Escondido? After all, it is the season of Peace on Earth!

Every night that the Peace family puts on the eight-minute light show at their house on Dundee Glen—in a neighborhood that is known for spectacular Christmas light displays—people from the neighborhood troop over to give a watch, their children’s faces light up with wonder as well as from the reflected light.  There’s a pirate adventure, complete with a pirate ship, music from “Pirates of the Caribbean” and even a cannon that fires a big plume of steam!

The house is also a destination for cars from all over town. So much so that the City of Escondido asked the Peace family to only put the show on during weekends. It just causes too much of a traffic funk if done every night of the week!

Not that the city isn’t as pleased as punch about the display. On the night The Times-Advocate visited there was a crew from the city filming for an upcoming video.

The show was put together as a Disney-esque pirate adventure that even includes a cannon that fires a steam cloud into the night. The Peace house display was one of several that were featured on the TV show “Great Christmas Light Fight” this year. In that show different families are in competition to win a prize as the best display.

David Peace is a software engineer by trade. He runs the technology team for a startup in Carlsbad called Bitmo; a gift card company that helps people to redeem gift cards from their Smartphones.

He describes how the family first got into building the fantastic display. “We were at Disney’s California Adventure one night and watching the World of Color display, with the dancing water and I told my wife, ‘I want to do that in our yard.’ So, I built these little fountain jets with LED lights in them.”

Since this took him about three months to complete, he decided this route was impractical. “So, we decided to go with LED lights instead,” he says. “That was five years ago and we have built it up ever since.”

Every year putting together the display is a family-affair involving David, his wife, Tikva and their boys, Caleb, Seth and Levi. Recently, in a video about the annual effort, son Seth declared, “We may be the Peace family, but at Christmas time it’s chaos around here!”

Tikva is very creative artistically. “I come up with a lot of the ideas but it’s definitely a family project,” she says.

Tikva says the display is a hit with all their boys, but especially the littlest one, Levi, who always demands to see the show every night from his stroller. 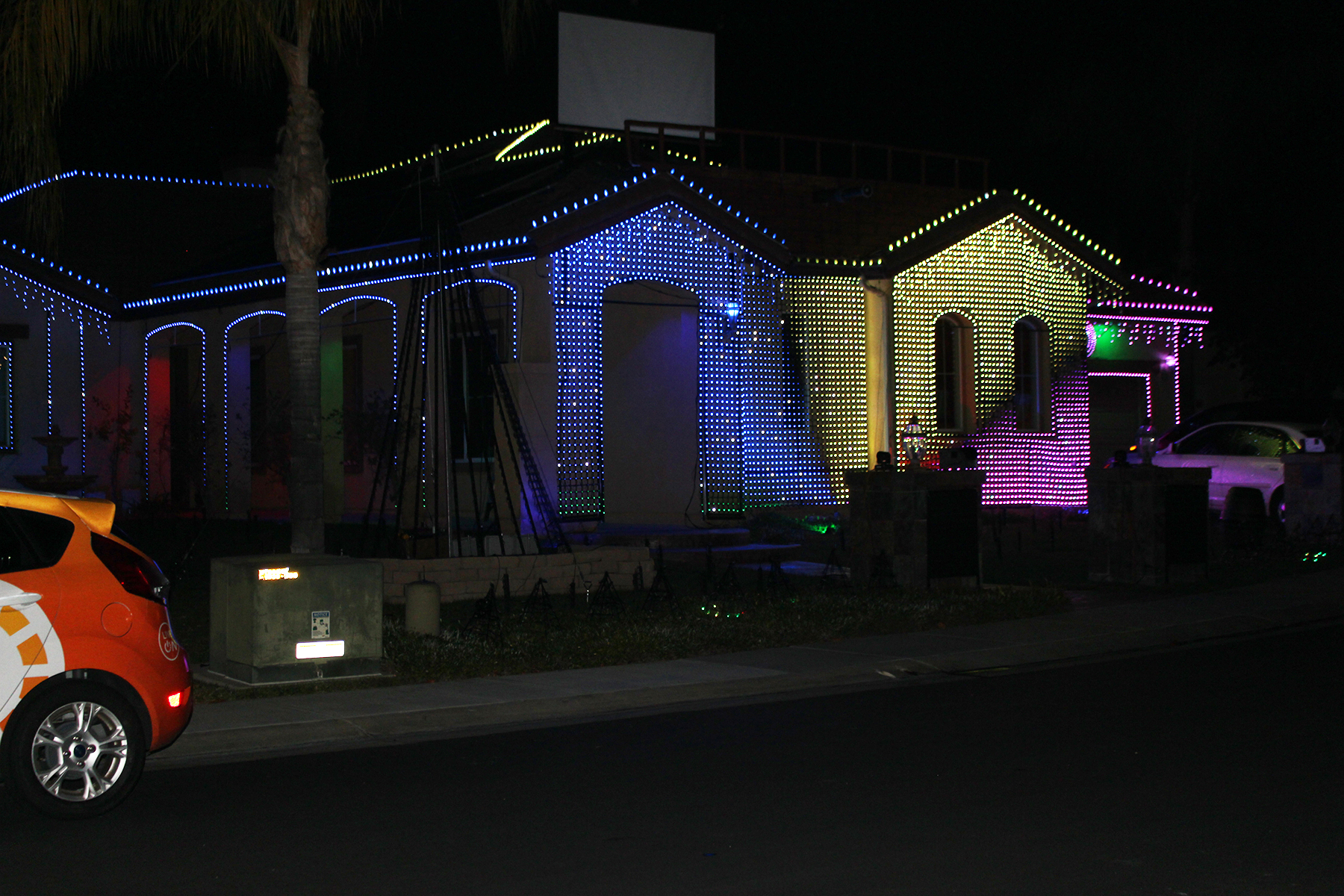 Another view of the Peace house.

The theme this year was “Pirates” and it involved putting a pirate ship on the roof of their house, and having a Christmas tree that breaks and which is then magically repaired by Santa.

“As the mother of three boys, of course I thought of ‘pirates.’ The idea of putting a pirate ship on the roof was such a fun idea,” said Mrs. Peace. There is plenty of special effects, such as the steam cannon and the falling tree and loads of music, most of it from “Pirates of the Caribbean.”  The display will be up for the rest of the year, and if you visit the street, be sure to check out all of the other great home Christmas light extravaganzas.

Watch the show here (YOU MAY NEED TO UNMUTE THE VIDEO) -or watch on Facebook: CLICK HERE