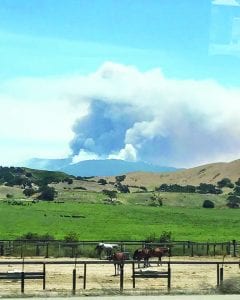 The Whittier Fire was an incident where the Escondido engine company served.

Since late June an engine company of the Escondido Fire Department (EFD) has been moving throughout California helping to battle the myriad wildfires that have broken out from Riverside nearly to the Oregon border.

This is not unusual. For years Escondido has sent crews to fight fires throughout the state as part of the California Mutual Aid Agreement.

“We have traditionally done this,” Fire Chief Rick Vogt told the Times-Advocate.

The tour of duty started June 26 when the EFD sent an engine to Riverside. From there it went to San Luis Obispo, and then to Santa Barbara and Mariposa and finally to Jacksonville, which is in Calaveras County.

“When we have an engine out that long we rotate the crew every fourteen days,” said the chief. So, once during the deployment to the northern part of the state the crew was replaced.

“That’s a significantly long time to be out assisting, but we went to five fires,” said Vogt.  “They were in Riverside for a day, then in San Luis Obispo for six days, and Santa Barbara and Mariposa for 11 days. The biggest fire was the Detwiler fire near Yosemite.”

August 5, they sent a brush engine, four firefighters, a captain and a strike team leader, to fires in the Modoc National Forest near Alturas, “which is about as far east and north as you can go and still be in California,” said Vogt.  “This morning [Monday] we sent a fire captain to the same fire to serve as a fire line paramedic for the fire fighters.”

The captain who went sent as a fire line medic will treat injuries firefighters sustain during their deployment. It’s part of the logistical services provided to the fire line. Typically, they will treat anything from a sprained ankle to poison oak. They also have the drugs to provide advanced medical treatment, as well.

“Part of the reason they are reaching so south is there have been so many fires that so many have been assigned to fourteen and 21 day deployments, so they need relief.”

In addition, the department has an Office of Emergency Services (OES) engine from the County assigned to the city. “OES buys the fire engine and loans it, and we send it to aid requests,” said the chief. The County reimburses the County for personnel costs, such as overtime. “They pay us for the personnel and we get a fire engine to use here when it’s not deployed.”