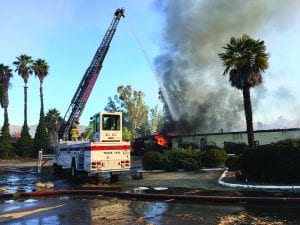 The abandoned Escondido Country Club building early Friday morning, November 22, burst into flame and took half a day for the Fire Department to extinguish.

It was a Black Friday indeed for residents of the Escondido Country Club area, who woke to black pillars of smoke rising over their neighborhood.

The abandoned Escondido Country Club building early Friday morning, November 22, burst into flame and took half a day for the Escondido Fire Department to extinguish. For years the building had been the refuge of the homeless, teenagers and taggers, who constantly broke into the building each time it was locked up.

Investigators have been on the scene ever since the blaze was extinguished, but so far have not revealed anything.

As The Times-Advocate was going to press on Tuesday, no cause had been identified. Jeff Murdock, emergency preparedness manager for EFD, said “Unfortunately we still have no cause for the Country Club fire and it is still being investigated. ATF (Alcohol, Tobacco & Firearms) has assumed the lead on the investigation. ATF has sent samples to the ATF lab which will take at least a month or more to get the results back. Results from the ATF dogs were inconclusive.”

The Country Club property has for several years been the focal point of a bitter battle between residents who formed the group ECCHO (Escondido Country Club Home Owners) and its owner, Michael Schlesinger, who has let the property go to seed.  The developer that is representing Scheslinger, New Urban West Inc., recently obtained a positive vote from the city council on its proposed 380-unit development for the former golf course.

NUWI didn’t provide a comment on the fire by press time. Mike Slater, president of ECCHO said, “no comment.”

According to the Escondido Fire Department: “On November 22, 2017 at approximately 5:20 a.m., the Escondido Police and Fire Communication Center received a report of a possible fire in the former Country Club Clubhouse, located at 1800 Country Club Lane. The first arriving unit reported heavy smoke and fire coming from the front of the single story abandoned building. Based on the conditions, a second alarm was requested and dispatched. Because of the heavy fire conditions, the danger from the roof collapsing and the building being abandoned, the fire was fought defensively from the outside.”

The Escondido Police Department established and staffed several road closures that were necessary to protect fire hose and water supply lines. In addition, Escondido Public Works and Fleet Services assisted with the overhaul of the building by providing heavy equipment and logistical support. Support vehicles and personnel were also deployed to mitigate the water run-off from the fire scene.

The “Country Club Fire” was contained and extinguished in approximately 12 hours and there were no injuries to firefighters or civilians.