News of Escondido residents attending college here, there and everywhere. 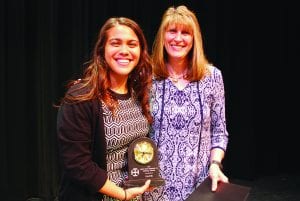 Saint Mary’s College senior soccer student-athlete and Escondido, California native Liza Felix was named as the recipient of the 2017 Mary Fran Meekison ‘40 Service Award by the Department of Athletics.

The award is presented for extraordinary service to Saint Mary’s College and the local communities. An excerpt of the award citation reads:

Service has played a large part in her career path. One of her majors – social work – is focused on serving others. Social work is defined as a discipline which seeks to facilitate the welfare of communities, individuals, families, and groups. This mission is one which Felix has taken to heart. She volunteered over 20 additional hours of her time to the Saint Joseph Outreach Services program throughout the fall while managing soccer season and other campus commitments. Beyond the Music and Memory program, she religiously returned to Healthwin to have dinner with the residents as her passion for serving the aging population has grown in the last year.

Last November, she was selected to present at the Inauguration Dinner for President Jan Cervelli, and naturally, her speech was about service.

She is the daughter of Maria & Francisco Felix. She graduated with degrees in both social work and Spanish.

About Saint Mary’s College Athletics Senior Awards: Every year, the Saint Mary’s College Athletic Department hosts an awards ceremony honoring the senior athletes who have been a part of the Department over the past years. In addition to each senior athlete receiving a watch to commemorate their time spent participating in Belles’ Athletics, a select few seniors are recognized with special awards, including the Mary Fran Meekison ‘40 Service Award.

The following Escondido students graduated from Azusa Pacific University on Saturday, May 6, and joined about 1,700 graduates at the spring commencement ceremonies:

Kelsey Geckeler, with a Bachelor of Science in Physics.

Christopher Law with a Bachelor of Science in Computer Science.

Cole Mizel with a Bachelor of Arts in Business Management.

Nicholas Pistotti with a Bachelor of Science in Business: Finance.

The following Escondido residents recently were initiated into The Honor Society of Phi Kappa Phi, the nation’s oldest and most selective all-discipline collegiate honor society:

These residents are among approximately 30,000 students, faculty, professional staff and alumni to be initiated into Phi Kappa Phi each year. Membership is by invitation only and requires nomination and approval by a chapter. Only the top 10 percent of seniors and 7.5 percent of juniors are eligible for membership.

Cruz Navarro, Jr., of Escondido, graduated from McKendree University with a BS degree in health and wellness. The university held its 177th commencement exercises on May 13 at the Lebanon, Illinois, campus for students who completed their degree requirements in December 2016, May and July 2017.

Escondido  resident Steffani Clark-Jijon, a current master’s student in the Global Field Program (GFP) offered through Miami University’s Project Dragonfly, will travel to Mongolia in June 2017 to study the ecology of steppe ecosystems, with a focus on the Pallas’ cat, Przewalski’s horse and participatory conservation media.

More information about Clark-Jijon’s 2017 course can be found at www.earthexpeditions.org. Click Mongolia.

Since the program began 13 years ago, Project Dragonfly’s Earth Expeditions graduate courses have engaged more than 2,000 people in firsthand educational and scientific research at critical conservation field sites in Africa, Australia, Asia and the Americas.

University of San Diego student  Alexa Layne of Escondido, among others, was selected to represent the school after her upcoming graduation in the Alcala 100 alumni group.

A reception was held in the students’ honor, and featured multiple speakers congratulating these young leaders on their accomplishments over the past four years, and the many more to come.

The Alcala 100 is a prestigious alumni group consisting of outstanding leaders from each graduating class. Every spring, administrators and faculty members from across campus nominate key seniors leaders to be inducted into the Alcala 100. As students, these individuals demonstrated a passion for USD and through their contributions to student life they made a major impact on our campus.

The University of San Diego is a Catholic institution of higher learning committed to teaching, the liberal arts, the formation of values and the creation of ethical leaders.