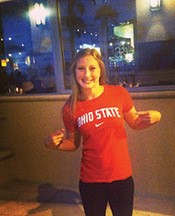 “It’s very exciting. It’s an incredible opportunity for her to go to Ohio State,” said John Philips, who is Pamplin’s diving coach for her high school meets. “I’m very proud of her,” Philips said. “We can see the hard work pay off.”

The change means that Pamplin, who commutes from Scripps Ranch to Escondido Charter for school, now travels six days a week to Mission Viejo for practice.

Pamplin has not determined her major but is leaning towards sports psychology. “I just felt Ohio State is the best fit for me,” Pamplin said.

Socher was considered the top club coach in the United States prior to taking the Ohio State position. Socher informed Pamplin that he had one scholarship available for the team and offered it to her. “She’s just one of those rare phenomenal athletes,” Philips said. “It’s exciting to see the next step and the next chapter in her diving career.”

Pamplin was six when she moved from Santee to Scripps Ranch. She attended kindergarten and first grade in Santee and second through seventh grades in Scripps Ranch. She was schooled through Escondido Digital Academy for eighth grade before enrolling at Escondido Charter for her four years of high school.

Because of her practice schedule Pamplin is in Escondido Charter’s independent study program rather than in a traditional classroom setting. Pamplin’s signing made her the first Escondido Charter athlete in school history to sign a letter of intent. “It was a really special thing to sign at my school for me,” she said.

In December 2013 Pamplin finished seventh among the 29 female divers at the Youth Olympic Games in Austin, Texas. In August 2014 she completed in the national championship meet at the University of Tennessee and placed tenth on the one-meter board. “It was a really intense meet,” she said. Pamplin also finished among the top 20 in the three-meter and ten-meter competitions.

“To finish in the top 20 in all three is quite a feat,” Philips said. “To me that’s just phenomenal.”

Pamplin spent the weekend prior to her letter of intent signing in Mexico for a November 8-9 binational meet between the United States and Mexico. “It was a really good meet. It was my first international meet and it was a really great time,” she said. Pamplin won the one-meter diving competition, teamed with a Mexican diver to win the synchronized diving conducted off a three-meter springboard, and placed third in the ten-meter platform board competition. “I actually did very well there,” she said.

“She’s really matured over this last year,” Philips said. “I can only imagine when she goes to college how much more she’s going to grow,” Philips said. “We’re just very proud of her and very excited.”