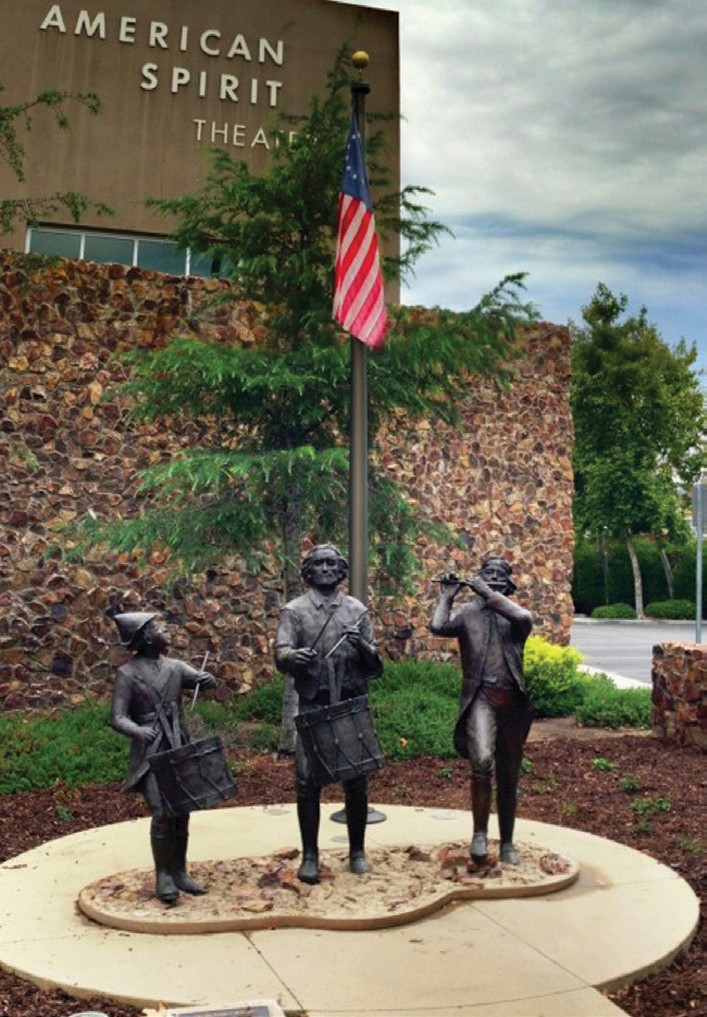 Escondido Charter High School (ECHS), known to Escondido resi­dents for its iconic bronze statues of children raising the American flag that greet motorists along Valley Parkway—and for its back-to-basics approach to education—will cele­brate its 20th anniversary this Friday.

Twenty years ago Coach Denny Snyder was at the point in his 30-year career in education where he could take one of two paths. 1) Continue on as a teacher and coach in the Escondi­do High School District and eventual­ly collect his pension or 2) strike out in an entrepreneurial direction and start something that was extremely new in San Diego County: a charter school.

Since he had been a coach all of his adult career, Snyder decided to employ the principles of coaching to teaching academics.

“I was still teaching and coaching in the district when the charter movement came to California in 1992,” he recalls.

In 1992, the California State Legis­lature passed the Charter Schools Act, which allowed for the formation of inde­pendent public schools free from many of the bureaucratic burdens placed on regu­lar district schools. They were required to operate under a “charter” granted by a local school district and so are called “charter schools”.

In 1994 Snyder began to think serious­ly about starting a charter high school. It was a pioneering act, since few examples of charter schools existed in California to

emulate. “No one knew what a char­ter school was.” And sometimes pioneers take the arrows.

He took a long leap of faith into the future. Nothing was certain. The first classroom of the Escondido Charter High School was across the street from the current campus, upstairs in a busi­ness park. Snyder charged the rent on his personal credit card in anticipation of being paid ADA. “Bill Horn (now Fifth District supervisor), who was then on the Escondido High School board, got us our first computer,” he recalls.

In his job as a high school teacher and coach he had seen lots of students who weren’t getting the kind of education they should be getting to deal with the challenges they would face after high school and in college. He wanted to do something about that.

He started with 30 students in the rented upstairs office space. His neighbors included other businesses such as a small printing operation and a church.

“I liked the entrepreneurial spirit of the charter schools. I was fortunate to have parents who knew me,” recalls Snyder. He also had students who knew him and wanted to follow him to his new venture.

He relied on a back to basics philosophy that owed much to his experience as a coach. To this day Snyder prefers to be called “coach” by the staff, parents and students of the charter high school. 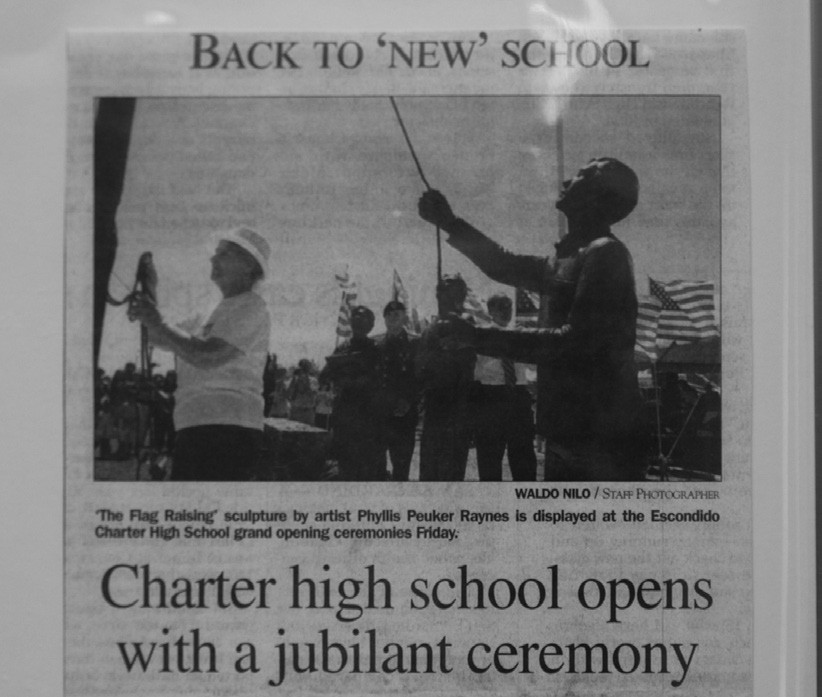 Photos from the scrap book.

bedrock principle was to empha­size the fundamentals: reading, writing and math com­bined with individualized learning programs and flex programs. It starts from the premise that if you can read you have a good grounding to be successful. If you can write you have an even better chance to be successful. And, of course, math is an important skill for any adult.

Besides these fundamentals the school also empha­sizes the American values symbolized by the American heroes like Lincoln, whose statue is featured prominent­ly on campus, sitting in a bench in front of the library, as well as other patriotic symbols that subliminally in­fluence students as they go about their daily activities. Such as the American Spirit sculpture inspired by Ar­chibald M. Willard’s oil painting The Spirit of ‘76 circa 1876. This statue stands in front of the campus’s Ameri­can Spirit Theater. The statues were commissioned from area sculptor Phyllis Peuker Raynes.

“As people walk around I hope that they will pick up on the message of the statues,” says Snyder. “We hope it sinks in how fortunate we are to get a decent education in a safe and secure place. In a place where people care about you and hold you accountable.”

He adds, “We emphasize traditional American val­ues, like hard work and taking personal responsibility for your actions.” 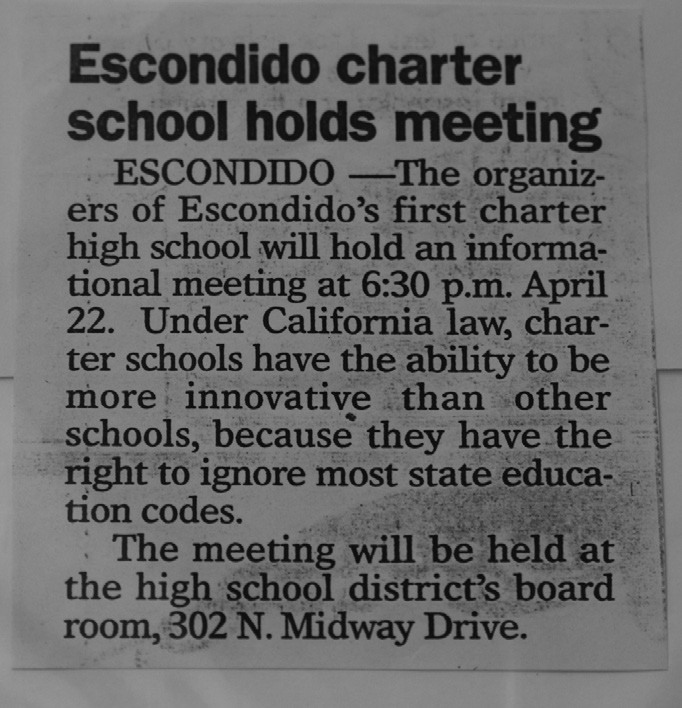 speakers that highlight American ideals. ECHS students study the U.S. Constitution and other founding documents, and read some of the great works the Founding Fa­thers read.

The leap of faith that led to the creation of the Es­condido Charter High School eventually evolved into the American Heritage Charter Schools, which, be­sides the high school, includes the Heritage K-8 Char­ter and the Heritage Digital Academy. From about 30 students in 1996 the schools have grown to around 1,800 students today—with a waiting list of 1,000.

A school whose staff started at five teachers had grown to 20 by the end of the first five years. “And it’s never quit growing,” observes Coach Snyder.

Although as a charter school ECHS can accept students from the entire county, practically speaking about 95% of its students come from Escondido.

Because it is a charter school, and subject to the mar­ketplace, unlike a traditional school, the ECHS needs to constantly adapt and evolve and be innovative. “You actually have to do a better job,” says Snyder.

“Our goal is not to be big but to keep quality up,” he says. “If you are a student it’s hard to get through the day without someone knowing what you are doing academically. That’s because people care about how our students are doing.”

For that reason they constantly focus on improv­ing student learning. “We try not to be complacent. In sports and in 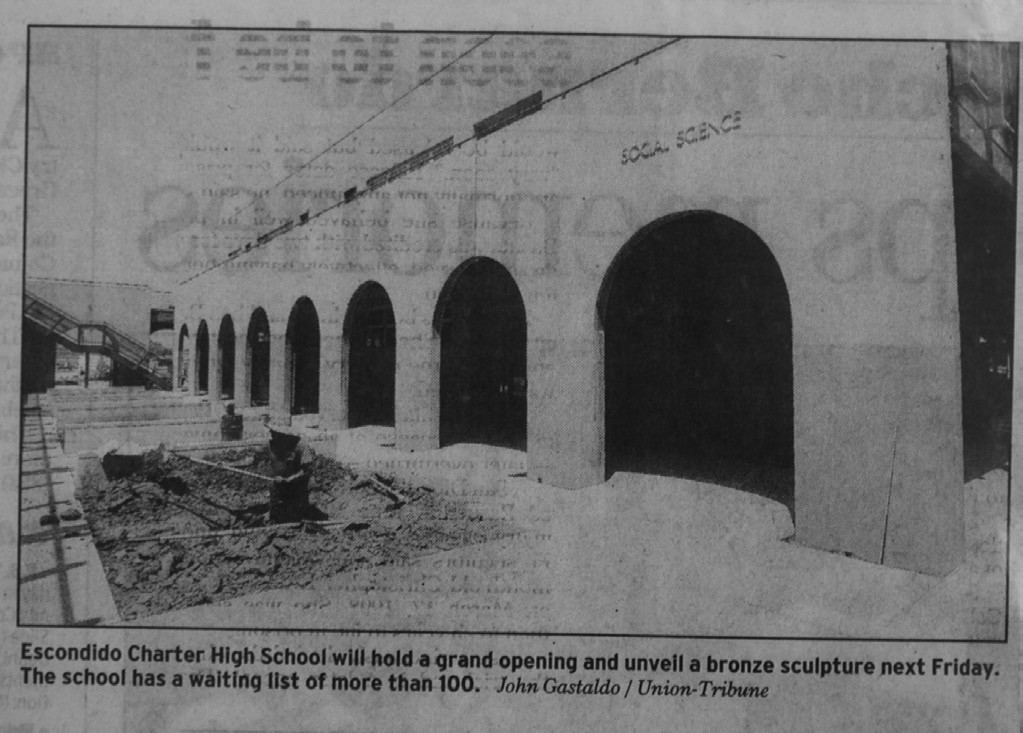 business you can’t take success for granted. So we are always talking about how to be bet­ter each year,” says Snyder.

ECHS has had its share of controversies over the years, and, says Snyder, you are somewhat defined by your adversaries. These, of course, include opponents of charter schools, such as teachers unions, who, he says, constantly take potshots at charter schools.

Snyder doesn’t understand “why people who want to have the right to choose where to buy a car or their groceries oppose the right for people to choose what kind of school to send their children to.”

He adds, “A lot of critics accuse us of cherry picking kids and not being diverse enough.” Some critics don’t like the school’s traditional values and some even ac­cuse the school of having prayers during assemblies, something Snyder says emphatically is “not true.”

“When you are successful you will attract some nay­sayers.

We will always have detractors. If you go through life without detractors you aren’t doing it right,” he says.

All of the staff members at ECHS, in­cluding Snyder, serve at the pleasure of the charter school’s board, from year to year.

It is those people, people with passion, who have made ECHS a success, says Snyder. “In any business you have people who do what they do for the right reason. Not for the money, although, of course, we all want to get paid, 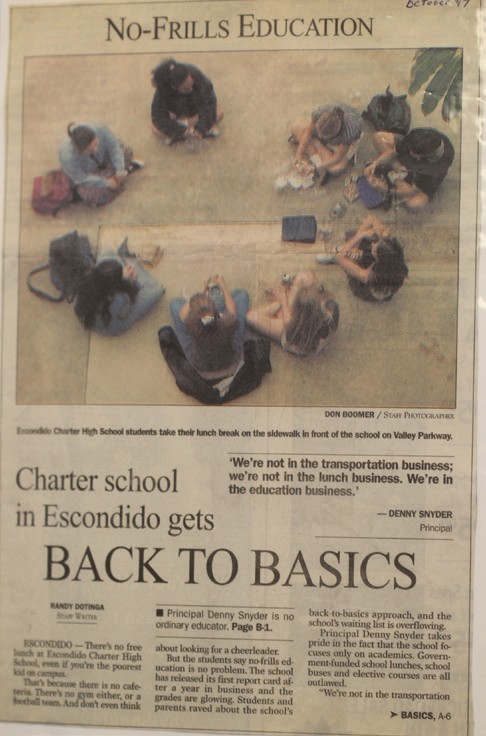 but because they love what they do. I am surrounded by people who are passionate about what they do. It’s almost like a calling. I’m fortunate to have such people.”

One such person is Shawn Roner, ex­ecutive director of American Heritage Charter Schools. “Shawn has done an exemplary job of moving through the process of implementing flex time at our schools,” says Snyder.

Since the charter high school is an experiment that is constantly being re­vitalized, Snyder encourages his people to experiment. “I want people willing to experiment to improve learning. I’m not going to hold them back if they want to try something new. If it works it works, and if it doesn’t we try something else.”

“People are often unreasonable, illogical, and self-centered.
Forgive them anyway.
If you are kind,
people may accuse you of selfish ulterior motives.
Be kind anyway.
If you are successful,
you will win some false friends and some true enemies.
Succeed anyway.”

To Snyder that is a good perspective on education and, ultimately, on life.