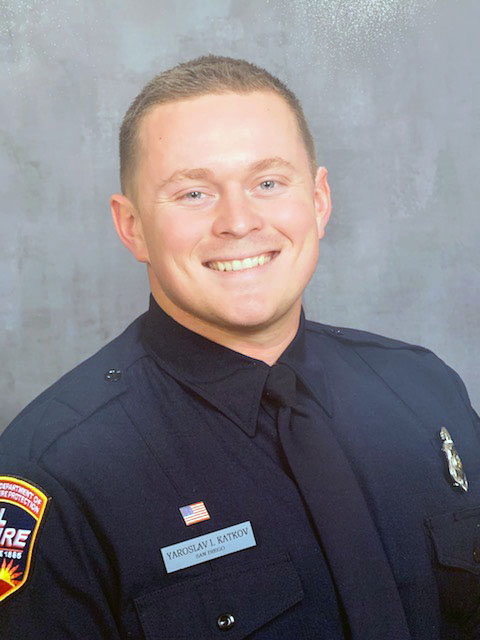 An Escondido resident, Cal Fire Firefighter Yaroslav Katkov died Monday after collapsing on Sunday during a training hike in Murrieta.

Governor Gavin Newsom this week issued the following statement regarding the death of Firefighter Yaroslav Katkov:

“On behalf of all Californians, Jennifer and I extend our sincere condolences to Cal Fire Firefighter Yaroslav Katkov’s family, friends and colleagues during this difficult time. It’s the work of brave firefighters like Yaroslav that keep our communities safe, and we are deeply grateful for his service.”

Firefighter Katkov, 29, of Escondido, suffered a medical emergency on Sunday while training with his engine crew. He was transported to the Temecula Valley Hospital and passed away Monday morning.

Firefighter Katkov began his career with Cal Fire on August 18, 2018 as a seasonal firefighter. He is survived by his father, mother, Nadia and brother, Sam.

According to Cal Fire Chief Tony Mecham, Katkov was assigned to Station 16 in the unincorporated area of DE LUZ, six miles northwest of Fallbrook.

Katkov was also a member of the Forest Fire Lookout Association.

In honor of Firefighter Katkov, State Capitol flags will be flown at half-staff.