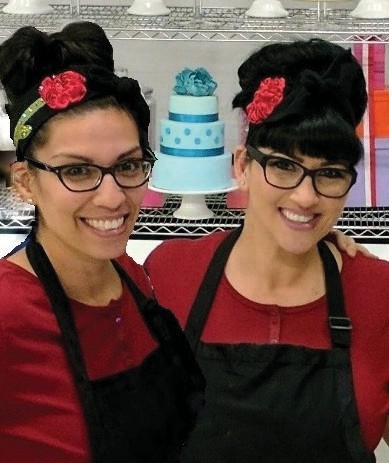 Cake celebrity Linda Caro of Escondido (right) and her assistant Alicia Becerra, who helped her during the TV show.

Escondido resident Linda Caro, who operates Little Hunnys Cakery here in the city, and whom we featured in September when she won the Powerpuff Girls “Cake Wars” Episode in September 2016 (Season 4 episode 1) is back!

Caro is going back to Food Network to compete in “Cake Wars Champs.” It’s a new mini season (6 episodes) of previous winners. Her episode airs Sunday March 5 at 10/9c.

We interviewed Caro about her second TV appearance:

Q: Does doing these shows make you improve your work overall? In other words, does the competition make you a better baker every day?

A: Yes I think these shows since they’re timed, they help us to manage time better. They let us know what we can do in a certain amount of hours. Also, when we hear what the judges say about our work, it gives us constructive criticism. The first time I appeared on the show, I was told my buttercream was too sweet. So, then next time I went back I knew what they were looking for in a buttercream so I made a fancy Italian meringue buttercream which they enjoyed. Now every time I make buttercream, I’m always testing it to check the level of sweetness. Every time I bake cakes and decorate, I’m thinking—“Would the judges approve?” It’s a good thing and I think it helps to make me a better baker.

Q: Can you describe the kind of preparation that you had to do for your second stint on the show? Has your participation previously “upped your game?” Do people on the street recognize you now? How has your business done?”

A: This time I got the phone call asking if I wanted to come back to the show to do another episode. I was excited and said yes! Within a week we were at the studios filming. We knew what to expect from last time although this time everything was faster and we were rushed. We had to quickly make room in our busy schedule to leave town. We wore almost the same wardrobe as last time, just changing our shirts. I am recognized almost everywhere I go now. Everyone knows me as my business name “Little Hunnys Cakery.” They know me as being a previous Cake Wars winner. I am often complimented on the characters from my winning cake. Business has been booming since appearing on Food Network’s Cake Wars. I couldn’t catch up with emails for a solid week after the show aired. That was difficult for me because I usually reply to all emails within an hour. What’s really cute is all of the kids at school tell my kids that their Mom is famous.”

Caro works out of her home bakery. She is married and she and her husband, Carlos, have three children, ages 10, 7 and 6.

Little Hunnys is a licensed home bakery, whose business is mostly conducted online, although you can certainly call her at 760-492-4540. You can also reach her on Facebook or Instagram.