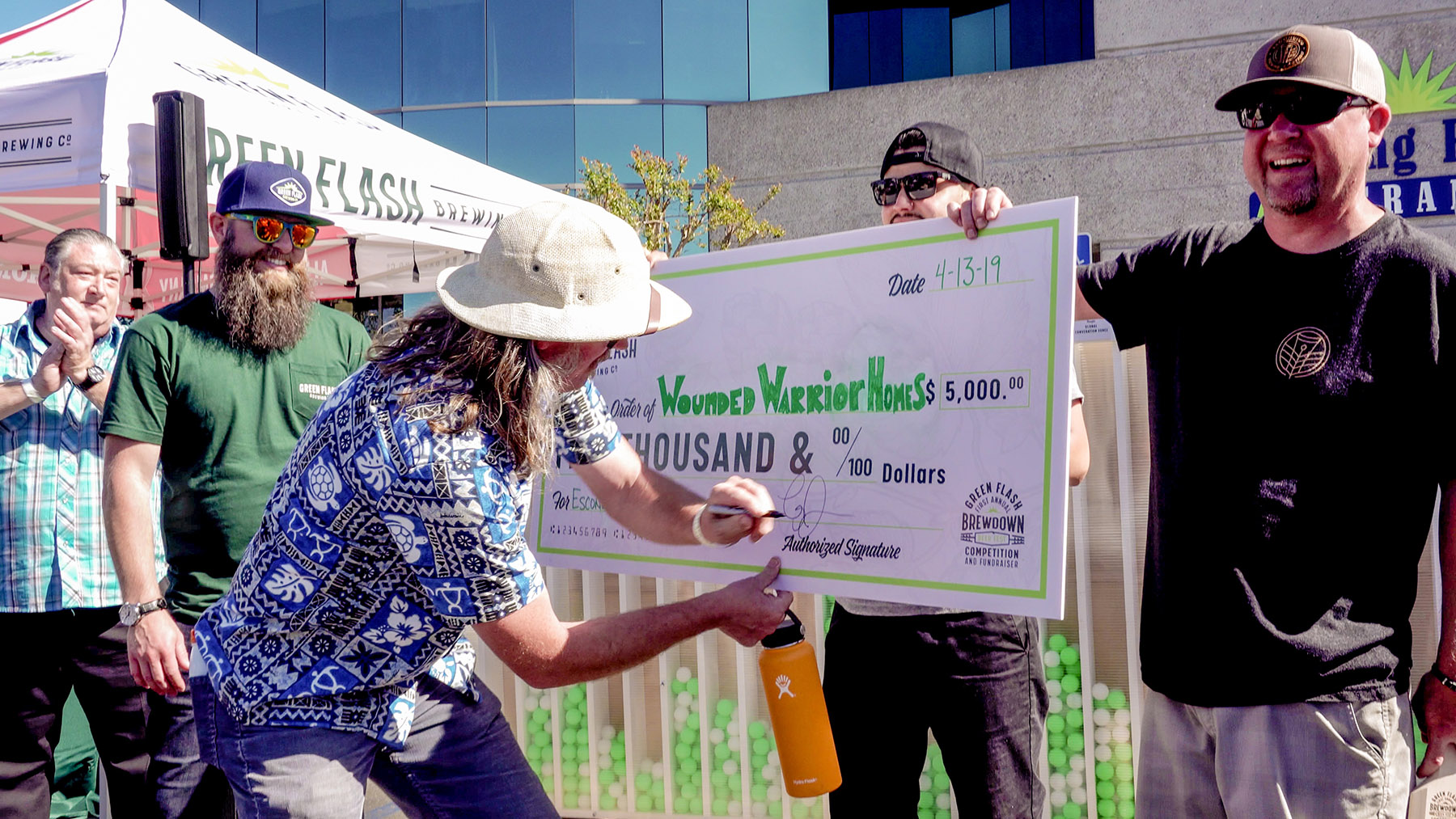 On April 13 at its first beer festival as a contestant, Escondido Brewing Company blew away the competition for first place—and it wasn’t even close.

Escondido Brewing head brewer Ketchen Smith has won many awards for his IPA, but his first place win at Green Flash Brewing’s first annual Brew Down Beer Festival was especially sweet because it enabled Escondido Brewery to donate $5,000 to its favorite charity: Wounded Warrior Homes. The nonprofit is chartered to provide transitional housing to single post-9/11 veterans with Traumatic Brain Injury (TBI) and Post-Traumatic Stress (PTS).

“What was interesting about this festival was a different aspect than any festival I had ever attended,” Ketchen Smith told The Times-Advocate. “Every beer purchaser got a ping pong ball. It was a general popular vote where you cast the votes blind.” You bought a beer and dropped the ping pong ball for your favorite. A panel over the ping pong set kept the name of the brewer hidden until the end.

Smith had been busy all day serving their Hopcondido IPA beer when Green Flash’s head brewer Erik Jensen came over and told him he should come over.

“Don’t you have to count the balls?” asked Smith.

“I don’t think we’re going to have to count,” said Jensen.

Smith said, “We were super-excited that our favorite charity got $5,000. I knew even if we didn’t win, some charity was going to win. Most festivals you serve the beer and that’s it. This one had an important purpose.”

The brewery won with its Hopcondido IPA beer, an American India Pale Ale with juicy citrus notes. The brewery has been serving this IPA from the beginning. It has been an enduring favorite for the two years since the brewery opened.  Smith describes it as “A West Coast style IPA. Clear with some citrus and piney notes to it. It has been our number one seller.”

All of Escondido Brewery’s beer names are derived from the city’s history and geography. They recently introduced Lime Street Lager.  Lime Street was the original name of Broadway.

“If you look at certain sidewalks along Broadway it still has lime stamped into the sidewalk,” said Smith, who likes to give a history lesson when he sells a beer.

“We’re very excited,” he added. “We are going to present the check to Warriors on Live TV. We’re not sure when. We definitely are excited we can support a charity and do it for a good cause.”

A month or so away from its second anniversary, Escondido Brewery remains, at less than 300 square feet, one of the smallest breweries in San Diego. It’s still only open on Fridays and Saturdays because co-owners Ketchen Smith and Evan Smith (they are not related) both have full-time jobs.

“We have hired an employee and we are slowly growing. We decided not to grow too fast,” said Ketchen Smith. “We almost always have ten beers on tap and a food truck. We are always filled to capacity.”

He added, “Our second anniversary is June 8. The future looks bright. I just have to manage a couple of jobs,” he quipped.

Wounded Warrior Homes is a grassroots charitable non-profit chartered to provide transitional housing to single post-9/11 veterans with Traumatic Brain Injury (TBI) and Post-Traumatic Stress (PTS). It is made up of are citizens, like you, who deeply care about our nation and appreciate the sacrifices of those who have served in armed conflict to protect our country, our nation’s interests, our people and those in other nations.

The City and County of San Diego have not only one of the highest population of veterans, but also one of the highest number of homeless veterans. Wounded Warrior Homes’ aim is to alleviate the growing stress of unsheltered vets in California by providing transitional housing to those with Post Traumatic Stress and Traumatic Brain Injury. 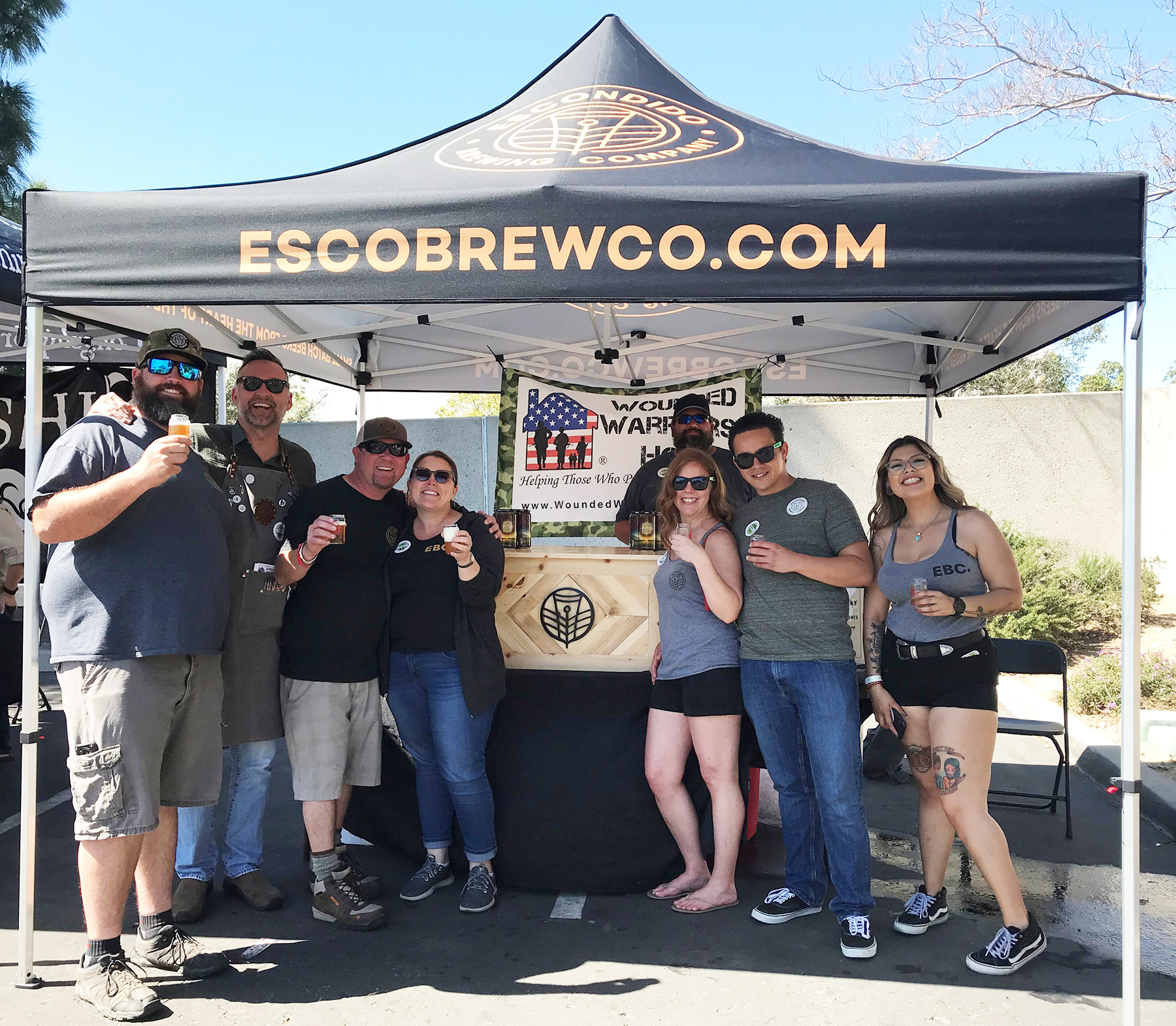 Friends and relatives helped out with the Escondido Brewery tent.