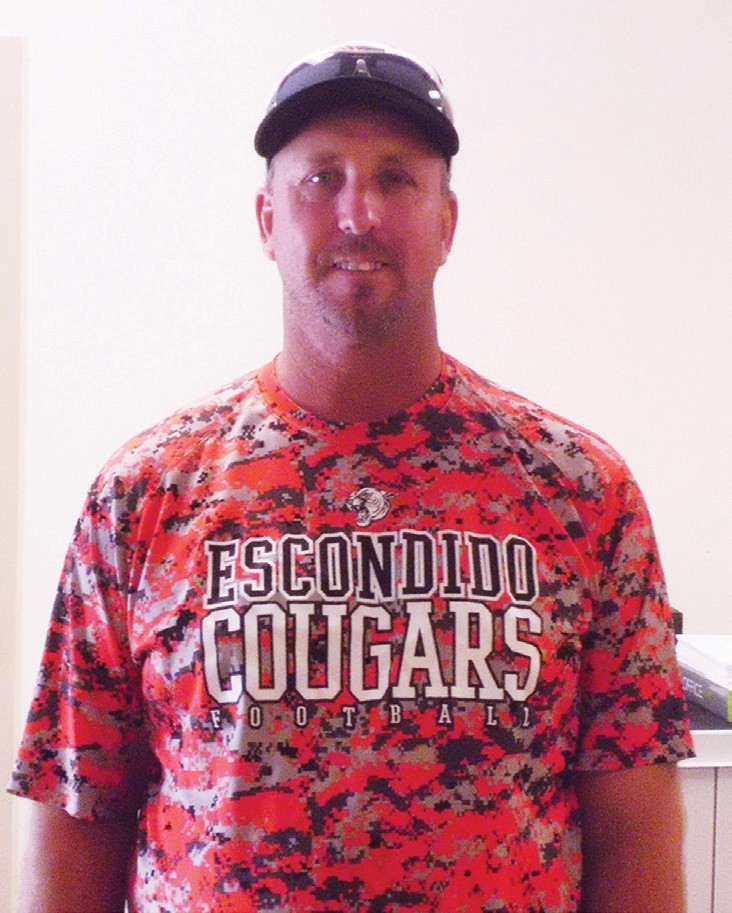 We are often told to shoot for the stars because even if you don’t quite make it there, you nonetheless might accomplish something noteworthy along the way. Falling just short of that goal can still reap some impres­sive results.

Case in point, the 2016 Escondido boys baseball team. From the incep­tion of the season, this was a team looking to go all the way, a club whose high profile players clearly set their sights on the ultimate prize, winning a CIF championship.

Did they make it to the promised land? Not quite, though they came tan­talizing close. But in that determined quest, significant milestones were achieved and a memorable season was etched into the record books.

Check out some of these highlights that took place along the way.

The Cougars of Coach Aaron Hoo­fard won a massive 26 games and lost but eight.

They experienced an ultimate high when they went on an unprecedented 16-game winning streak. “That was a lot of fun,” says Hoofard of the re­markable run. “The kids really enjoyed it. It was pretty crazy because the ball just seemed to be bouncing our way. It was something that had never been done before.”

Esco had a huge year when it came to run differential, outscoring the op­position by a whopping 214 to 121.

And finally, when staring playoff elimination squarely in the face, the Cougs didn’t blink. They demonstrat­ed their clutch gene and dug down taking three straight postseason games before eventually reaching the end of the line.

Yes, it wasn’t quite the final destina­tion point that they sought, but oh my, what an exhilarating ride it had been! When asked if this was the best team he’s had since he took over as head man four years ago, the straight-talk­ing Hoofard had a succinct and defini­tive answer. “The record says it is,” he answered and simply left it at that.

This admirable season was built on the bedrocks of good pitching and de­fense, staples that always seem to be present with any Hoofard club. But it was the offense that took a major step forward and made a decided differ­ence. Putting into practice the instruc­tion of hitting coach Mike Garcia, Esco came alive with the sticks and wound up with an overall team batting aver­age of .322. This despite the fact that the Cougs were constantly sacrificing individual at-bats in the interests of the team, giving themselves up in order to move runners along.

Escondido was also quite demonic on the basepaths. Fleet of foot and al­ways looking to take that extra base, the Cougars were aggression personi­fied and forced opponents into mak­ing mistakes because of the relentless pressure they applied with their legs.

But this talented team was much more than just pitching, fielding and hitting. It possessed a tight chemistry and genuine bond. The players hung out with one another away from the di­amond and the atmosphere surround­ing the club was undeniably uplifting. Negative vibes were virtually non-ex­istent.

Hoofard is a big believer in building character and creating a positive cul­ture that will benefit his players, be it on the field or off. And once they buy into his overall philosophy, the coach feels they are prepared to meet chal­lenges and won’t be overcome or in­timidated by adversity.

A high school team doesn’t win 76.5% of its games without having some real standouts and invaluable contributors. Let’s take a look at those youngsters who shined for Esco and made it one of the most dangerous out­fits in all of the North County.

On the mound, it was two-sport star Jake Moskowitz who proved to be the go-to starter. Tall and pitching from a funky angle, Jake exhibited splendid control and continually threw strikes. Much more mentally tough than the year before, Moskowitz really took his game to a new level as his 10-1 record and 1.80 ERA would indicate.

Hunter Bean was the number-two man in the rotation, starting 11 games and winning six of them. Armed with great stuff, Bean struck out 49 bat­ters in 55.2 innings while carrying an ERA of just a shade over 3.00. Plagued by some bouts of wildness, however, Hunter would have been even more impactful, with sharper command and a lower walk total (36).

Without question, the revelation of the staff was freshman sensation Juan Cervantes. Considered to be the biggest surprise of the entire team by Hoofard, Cervantes amazed with his cool and poise under fire. He was particularly stingy in tight games and seemed impervious to pressure, giving the impression that no situation could overwhelm him. In 17 appearances that included a perfect 3-0 mark, two starts and a pair of saves, Cervantes registered a nifty 1.61 ERA.

And while the pitching more than held its own, man, the Cougs really had some guys who could flat out rake. Easy outs were hard to find in the Esco lineup.

Junior shortstop Kellen McCoy, a slick fielder who makes plays and pos­sesses great hands, was also dynamite with the bat. McCoy put his smarts and athletic build, the result of being a workout warrior in the weight room, to good use whenever he was at the plate. Owner of a robust .378 average, Mc­Coy, a second team All-CIF selection, led the Cougs in RBIs with 29 and was second in at-bats, hits and singles while finishing third in runs scored, doubles (10), SLG and OPS.

Another hard-hitting infielder who put a real hurt on the ball all season long was second baseman Ben Don­nelly. A true leader, a fierce competi­tor and the baseball equivalent of a gym rat, Donnelly is a lefty with a sweet and compact swing. His hitting prowess was evidenced by the way he dominated the Esco stat sheet, pacing the club in at-bats, hits (44), singles and runs scored (35).

Senior Austin Rieman, typified the team-first mentality and unselfish­ness of the Cougs. Asked to move to the outfield to make room at second for the promising Donnelly, Rieman showed himself to be the ultimate teammate by gladly obliging, anxious to do whatever was required of him. Perhaps with karma working for him, in addition to a sturdy and powerful body, Rieman was a big-time stroker in 2016, the only Cougar to surpass the coveted .400 mark (.406). His 13 doubles, .614 SLG and 1,106 OPS were also team-highs.

Backstop Gustavo Cervantes, one gritty hombre and a first team Avoca­do East League performer, was a true catalyst for the Escondido attack. A youngster who worked his tail off, the senior occupied the key leadoff spot and went on to produce a splendid .354 average while scoring 32 runs, just three shy of Donnelly’s paceset­ting mark.

An unsung hero in ’16 was Anthony Seneres, who clearly surpassed expec­tations and had a “great year,” in the eyes of Hoofard. The senior outfielder continually showed up and demonstrat­ed his worth with a fine .376 average.

And finally, there was the aforemen­tioned Bean, who in addition to his pitching duties, saw significant time at other positions and certainly made the most of it. Bean flexed his muscles to the tune of a .337 average while rap­ping out 12 doubles and driving in 25 runs, which placed him a noteworthy second in the latter two categories.

The story of the Cougars’ season can’t be fully told without detailing their playoff exploits. Placed in the lower bracket of Division III and seed­ed second, Esco suffered a frustrating 6-3 loss to Del Norte in first round ac­tion. These two teams had already met three times previously, with the Cougs taking two but it was the Nighthawks who had snapped Esco’s terrific 16- game winning streak with a 3-2 victo­ry on April 23. In this postseason en­counter, one bad inning proved to be the difference as Del Norte scored all of its runs in the top of the third. Com­plicating matters was the fact that the Cougars produced sufficient offense with 10 hits but didn’t fully capitalize on their opportunities.

Now, knowing that one more loss would eliminate them, the Cougs went to work. Two days after falling to Del Norte, Escondido edged Hilltop 6-5. The following day, the Cougars took care of Mt. Carmel 9-4. That set up another meeting with the Nighthawks. By this time, the two clubs had seen so much of one another, they were perhaps beginning to feel like the Hat­fields and the McCoys. Hoofard fully expected a tight game and that’s ex­actly how things played out, with the Cougars scoring a dramatic run in the ninth inning to eke out a 2-1 victory.

That forced another matchup be­tween these familiar rivals the next afternoon. Much was at stake, with the victors advancing to the Division III championship finals. Originally scheduled for a 3:30 start at Esco’s home field, the game had to be moved up to 1 p.m. so as not to conflict with the graduation ceremonies taking place later on. Though not to make an excuse, this development did create a testing dynamic, with Hoofard’s se­nior players having to split their atten­tion between playing a game of great significance and then shortly thereaf­ter receiving their diplomas, with all the inherent distractions that entails.

And it certainly didn’t help matters that Nighthawk right-hander Michael Hoving, who finished the season with a glossy 8-1 record, was at his deal­ing best. The senior hurler limited the Cougars to just a pair of hits en route to a masterful performance that cul­minated in a 10-0 Del Norte win. A five-run outburst in the top of the fifth inning all but put this game to beddy-bye.

Though he felt confident coming into the contest, Hoofard admits that his team just “ran out of gas” and the number of weak ground balls that Es­condido hit seemed to support that as­sessment.

But the disappointing ending didn’t or couldn’t minimize what a stel­lar overall season it had been for the Cougs. When you win 26 games in a campaign, you’ve done a hell of lot that’s right and in retrospect, satisfac­tion and pride must be derived from such a notable accomplishment.

Looking ahead to next season, ex­pectations will once again be sky high but Hoofard wouldn’t have it any other way. Sure, saying goodbye to stalwarts like Rieman and Cervantes won’t be easy and yet, check out what’s coming back. Nine of 15 play­ers will be returning, the pitching staff remains intact and a potentially bril­liant infield loses not one component. To say Hoofard is revved up about Esco’s immediate prospects would be an understatement. He’s juiced and pumped to see what heights his charg­es can reach when they reconvene in 2017.

And once again, the Cougs will be reaching for the stars. Who knows, maybe this next time they just might make it there!