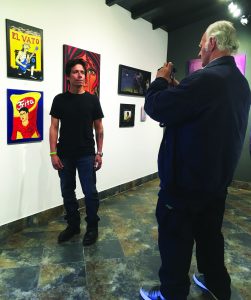 The artist is photographed in front his works, “El Vato” and “Frita.”

Escondido artist Armando Padilla is exhibiting some of his works at the Chimaya Art Gallery in Los Angeles.

Padilla attended the reception for the gallery’s grand reopening on Sunday.

Opening the doors of an art gallery is like entering a compilation of artist’s diaries.

Every wall is vividly decorated with a moment ripped directly out of an artist’s life.

Nothing is more fascinating than touching the shapes of colors with your own eyes.

What goes through an artist’s mind as they create such intrigue?

Chimaya Art Gallery is celebrating the 12-year anniversary of their grand re-opening. Located in Los Angeles, California the gallery is different than most. CEO Steven Acevedo envisioned a gallery where customers could experience art as it would appear on their own walls. His selection of hand crafted art includes many items one would find in their own home including jewelry, hand bags, sculptures and greeting cards.

One cannot help become engulfed in the sundry of beauty of art.

Padilla is an artist who is raising his family in Escondido. He has exhibited in the California Center of Arts, Escondido Municipal Gallery and Coast Highway Trader among others.

He has also given art lessons as a volunteer for Oak Hill Elementary School. His lesson revolved around the idea that art can give back to the community through charity and medical needs.

He also explained that art greats like Picasso and Diego Rivera cannot paint our lives today, implying that the future of art is in the hands of younger generations.

“I never planned on becoming an artist”, he says “art is just something that I’ve always done.” 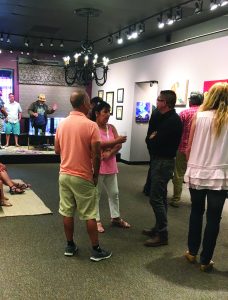 People socializing in the main gallery during the reception.

Chimaya was interested particularly in Padilla’s “El Vato” series of pop art. The art was created using digital art pens and software, and fine art galleries only accept real paintings or giclee prints. Padilla offered to recreate some digital pieces using acrylic paint with a few months’  lead time. The problem was, the gallery was re-opening in one month.

“I don’t know how but I managed to pull six paintings off within one month”, he said. “Because there were so many artists on display, Chimaya chose their favorite two.”

The idea of “El Vato” was born after he and his brothers completed the Del Mar Mud Run in 2014. The brothers, all native Californian’s, dressed up as Latino gangsters and completed the muddy course together. Padilla began putting some Andy Warhol style touches to photos from the event using an El Pato can in place of Campbell’s Tomato Soup.

“El Vato was just a fun idea to explore pop art,” he explains. “I put them online and people started buying t-shirts and stickers of them.”

As a graphic designer by day at a company in Vista, he explained the difference between graphic design and art. “With graphic design, you’re given a set of fonts, photographs and elements that you have to rearrange and modify“ he explains “but with art, you have nothing but a blank canvas and your imagination. You might use a photo as a reference but ultimately, it is up to you, your choice of medium and your hands.”

We asked Padilla to explain the significance of “El Vato”. 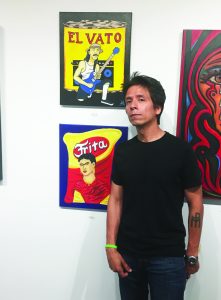 “Vato is what some Latin Americans refer to their personal friends as.”, he says “I started thinking of other potential vatos. Thinking Warhol style, I began using celebrities such as Richard Pryor, Bob Ross and Albert Einstein. When you’re friends with somebody, you give something of value to them. Richard gave us comedy. Bob gave us art. Carlos Santana gives us music. They’re all from different cultures but they’ve all influenced us as Americans.”

With so many different styles of art in Padilla’s work, what is in the future?

“Right now, I’m just excited to be part of Chimaya’s 12-year anniversary celebration. I have a private wine and painting party in June that I’ll be teaching so those are always fun. I’ve also started a bunch of new paintings so I’m excited to get out there and just do more shows.”

If you’re ever in Los Angeles, you can visit Chimaya’s Grand Re-Opening show through May 24th, 20017.