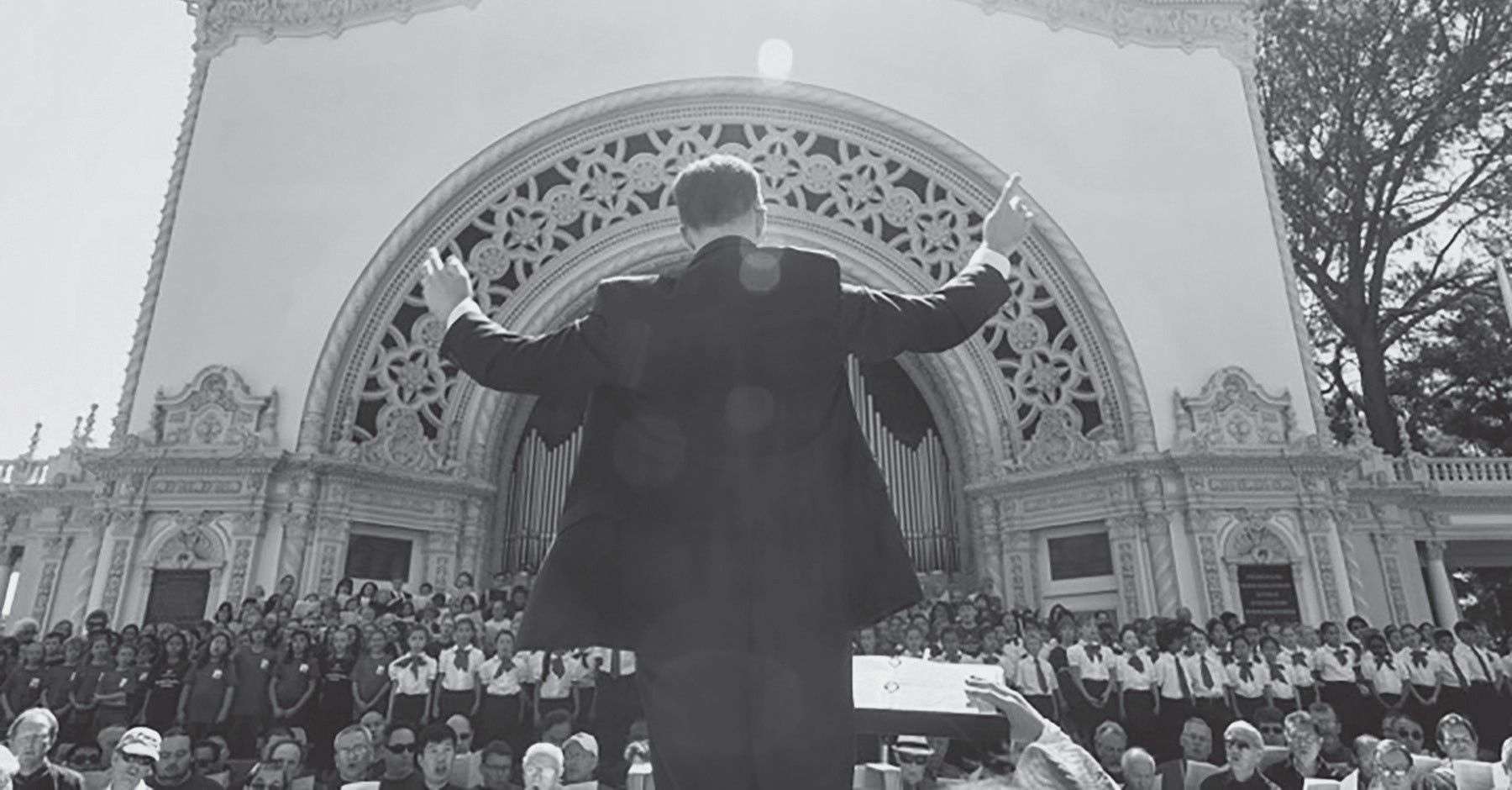 Twenty-two of San Diego’s top choral groups will perform in a free concert in Balboa Park on March 25.

Two years after making its debut as part of Balboa Park’s centennial celebrations, the San Diego Sings! Festival will return on Saturday, March 25, from 11 a.m. to 5 p.m., at Spreckels Organ Pavilion in Balboa Park.

San Diego Sings! Festival 2017, planned and presented by the Choral Consortium of San Diego, will feature 22 of the top choral groups in San Diego County performing by turn in a free concert, then joining together (more than 1,000 voices) to perform “The Gift of Singing” by living California composer Kirke Mechem, conducted by San Diego’s legendary choral conductor, Dr. David Chase. (Mr. Mechem may attend the event, schedule permitting.)

The first event, in 2015, presented the largest number of singers performing a choral piece together live on stage in San Diego’s history, and this year’s festival should match that spectacle. Photos from the 2015 event are attached. High-res available.

“Our first San Diego Sings! Festival was very well received and we are excited to bring it back to our own Balboa Park, showcasing the depth and breadth of San Diego’s choral groups with this one-of-a-kind event,” said Choral Consortium President Carol Manifold, co-chair with Sally Dean, Artistic Director of San Diego North Coast Singers.

“It’s an exciting opportunity for all San Diegans and visitors to hear a wide variety of groups, for free, in a lovely outdoor setting, as well as to hear a delightful piece sung by 1,000 voices. That is not an experience most people will ever get to have in their lifetimes, and we’re delighted to be able to offer it to our community,” she said.

Participating performers range from children’s choruses and barbershop groups to a Renaissance chorus, and from community choirs and women’s groups to a school chorus and a Chinese choral society. Between 11 a.m. and 5 p.m., each participating group will perform alone on stage for a 12-minute set under its own conductor, in programming of its choice. At approximately 1 p.m., the members of all the choruses in attendance will gather on and around the Spreckels Organ Pavilion stage to join their 1,000 voices in performing “The Gift of Singing.”

Kirke Mechem is a prolific composer with a catalogue of more than 250 works that have been performed in more than 40 countries. Born and raised in Kansas and educated at Stanford and Harvard universities, Mechem conducted and taught at Stanford, and served as composer-in-residence for several years at the University of San Francisco. He also lived in Europe, spending three years in Vienna, where he came to the attention of Josef Krips, who later championed the composer’s symphonies as conductor of the San Francisco Symphony. He has been honored and recognized for his contributions from such organizations as the United Nations, the National Endowment for the Arts, the National Gallery, the American Choral Directors Association, and the Music Educators National Conference. He was presented with a lifetime achievement award from the National Opera Association.

Mechem’s compositions cover almost every genre, but vocal music is the core of his work. His three-act opera “Tartuffe” has been staged more than 375 times and performed in six countries. “Songs of the Slave”, a suite for bass-baritone, soprano, chorus, and orchestra from his opera John Brown, has toured to more than 70 US cities. His extensive choral works have garnered him the title of “dean of American choral composers.”