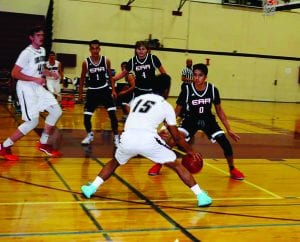 Keyed by players like Alex Tran (0), Ethan Davis (4) and Noah Vannoy (1), EA’s defense has been a staple of its success.

Though other local teams may have gotten more exposure, the Escondido Adventist Academy basketball squad is proving to be one worthy of both attention and an in-depth look.

Coming off a season in which they won the Citrus League crown and advanced to the second round of the Division 4 playoffs, the Hawks are picking up right where they left off with another solid campaign.

Owners of a notable 10-5 record, with six of those wins coming by a margin of 12 points or more, the Hawks are giving every indication that another league title and a strong push in the postseason are not only realistic but highly likely.

Under the stewardship of Coach Bill Davis, who has been at the helm for the past 10 seasons, the Hawks are a highly competitive club that prides itself on being extremely hardworking on both ends of the court.

And anchored by a starting core of four seniors and a dynamic junior who makes it a habit out of putting up a double-double, the Hawks seemed equipped to handle just about any challenge that may confront them.

By and large, Davis has liked what he’s seen so far from his team. “I’ve been pretty pleased with the results and the way we’ve competed,” says the coach.

Though certainly capable of going up tempo when the opportunity arises, the Hawks are more inclined to set things up on the offensive end, using either a three or four-guard deployment. Because four of their starters are 6’2” or taller, the Hawks can come at you in a number of ways be it with motion, an in-and-out approach or just dropping the ball into the post.

On the defensive side, EA relies primarily on a man-to-man scheme which has served it quite well. Davis believes that a tight and committed defense has become a staple of the Hawks and one of the prime reasons that the team has been able to make a mark.

Currently, the Hawks’ roster numbers ten players and interestingly, there hasn’t been one game this season in which everyone who was available didn’t log some playing time. But the majority of the minutes are generally spread among a rotation of six to seven players.

The Hawks’ starting five has proven to be a group that mixes and blends well together. Mathew Du, a topnotch golfer, is in his first year of varsity hoop. Smart and defensively oriented, Du is considered to be an effective niche player.

Noah Vannoy is an athletic performer who possesses some useful length. A high-energy guy, Vannoy is a splendid rebounder to go along with his solid defensive skills. Vannoy is also a  reliable scorer.

Tyler Davis is a guard/forward who can knock down shots from the outside and averages in double figures. Capable of filling any number of roles, 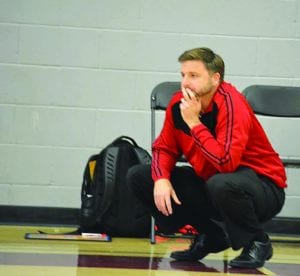 Hawks’ coach Bill Davis has his team playing well and primed for a late-season run.

Davis can either post up down low or take over point guard duties. His versatility is perhaps best captured by this observation from Davis – “He’s our Swiss-Army knife.”

The quarterback of the show is unquestionably Alex Tran. Blessed with keen court vision, Tran is the consummate floor general who can handle the rock, deftly dish it to teammates and generate points of his own. His plus-defense also merits mention as does his knack for coming up with steals.

And then there’s 6-5 Ethan Davis, the Hawks’ best-known player. Because he is effective with both hands, it’s a real chore trying to prevent Davis from getting plenty of points. In addition, Ethan exhibits a nice array of moves from underneath. Hardly limited to doing damage just in the paint, Davis can also stretch a defense with his commendable shooting from distance. Not hesitant to stick his nose into the fray, Ethan can bang with just anybody as his hefty rebound totals would attest. You can almost book it that whenever this talented junior takes to the court, a double-double will most assuredly follow suit.

As for contributors off the bench, look for freshman Caleb Washington to provide a threat with his touch from the outside, Benjamin Rangel to run the floor and exert ball pressure and Zach Tapia to bring energy and make the most of his chances.

Because of the relative inexperience of his subs, Davis knows that it’s essential that the Hawks’ starting five stay healthy and out of foul trouble if this season is to reach its full potential. Do that and the possibilities seem quite promising.

Yes, indeed, Escondido Adventist has been making some noise with its recent run of solid and notable play. It’s the Hawks’ intention to make even more of a name for themselves as the season kicks into high gear.