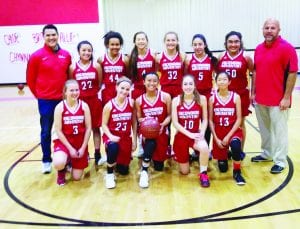 If ever a team had a reason to smile it is this Escondido Adventist squad that just concluded a magnificent 25-1 regular season. Photo by Thomas Pelletier

Just how good are these high flying Hawks? Well, under the steady stewardship of youthful-looking head coach Mario Perez, Esco Adventist has been darn near perfect. The Hawks concluded the regular season with an 11-game winning streak, an unbeaten record in Citrus League play and a spectacular overall mark of 25-1. EA’s lone setback came way back in mid-January when it fell to the accomplished Brentwood School of Los Angeles (25-4).

To say that the Hawks season to date has been special wouldn’t be doing it justice. More precisely, it’s simply been off the charts as evidenced by the best record in school history. Moreover, EA’s ability to dominate games has been reflected by the fact that 16 of their victories have come by 20 points or more.

And by virtue of their excellence up to this point, the Hawks will enter the Division III playoffs as the No. 1 seed when it plays host to Hilltop (No. 16 seed, 5-21) on February 21.

Because the Hawks come from a student body of less than a 100 students, don’t possess a great deal of size and aren’t into exhibiting any outward swagger, opponents often are left with a misleading perception of EA. “Yeah, we don’t ever pass the eye test,” says Perez, “and a lot of people we play tell us afterward they thought we would be clobbered. But these girls aren’t afraid to play hard and be intense.”

Well coached, burning with a passion for the game and ignited by a scrappy and aggressive defense, the Hawks have proven to be one formidable foe. Many of these girls have been playing with one another since the 8th grade so there is an unmistakable chemistry and cohesion that exists – the result of having spent so much time on the court together. Plus, there are two sets of first-cousins on the roster. In short, this group displays a real simpatico.

The core of the EA team is comprised of a standout starting five (four of whom are seniors) that is diverse and multi-skilled. Forward Chynna Cochran is a speedy performer who knows how to get out in transition. A versatile talent who can score (15.3 ppg), rebound (9.1 rpg) and block shots (5.5 bpg), Cochran must be considered EA’s go-to player.

Another extremely productive asset is power forward Allison Simmons, a legitimate defensive force who also gets her share of points (11.3 ppg) and is capable of sweeping the boards (6.3 rpg).

Making an impact down low is center Monique Johnson, a superior defender whose huge presence in the middle can’t be underestimated.

Running the show from the point is Camile Chu, a resourceful guard who can score (8.7 ppg) and dish (3.3 apg). Heady and an adept floor general, Chu is also the owner of a nifty handle.

Rounding out the starting crew is shooting guard Chloe Cochran (7.5 ppg), a 3-point specialist known for stretching a defense with her outside bombing.

Another player of note is junior guard Katy Youngbird (3.5 ppg), a hard worker on defense who has provided a real spark off the bench.

Other EA hoopsters that have seen action for Hawks this season have been Brittany Austin, Sasha High, Emily Gonzalez, Gloria Shin and Anna Barajas.

In recent seasons, the Hawks have captured titles in Division V and IV and they would like nothing better than to add a Division III crown to their resume. And based upon what has transpired thus far, there’s a very high probability that could take place.

This is a team that is clearly on a roll and knows how to win. It is also battle tested and ready to demonstrate it can be every bit as dynamic in the playoffs as it was during the regular season.

Thus far these Hawks have looked virtually unstoppable while flying high. It would be a surprise to many if, in the coming weeks, they don’t soar even higher.