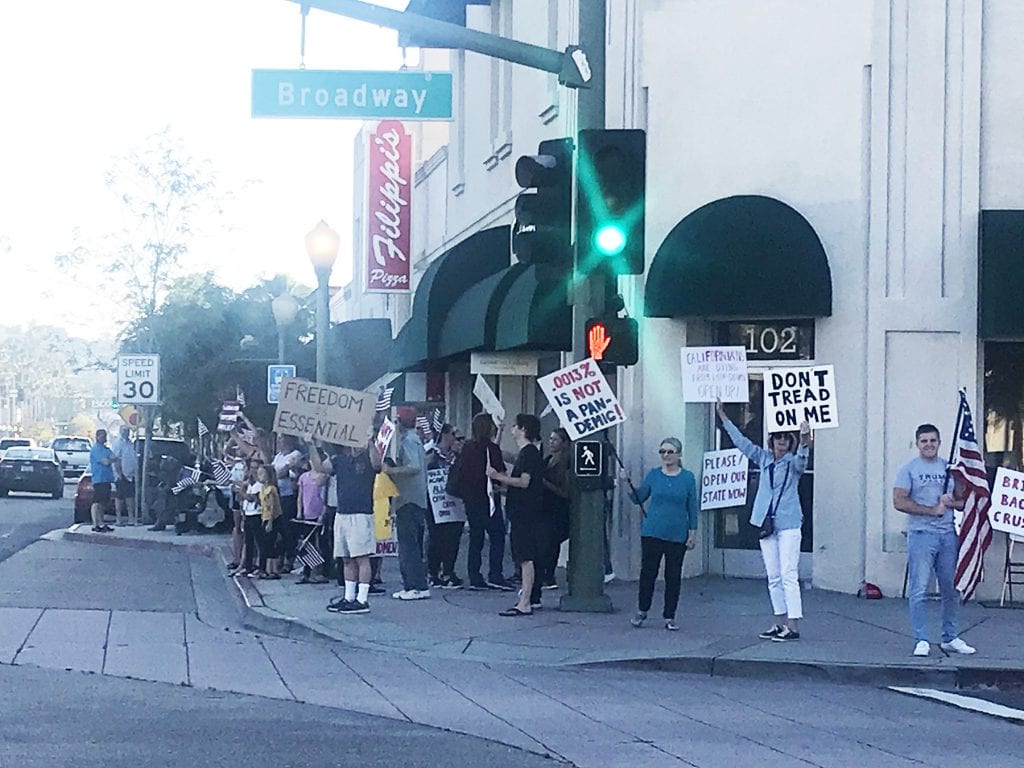 Demonstrators gathered at the corner of Broadway and Grand in Downtown Escondido Friday. Photo by Jonathan Day

Waving flags and displaying signs, some reading “0.013% is not a Pandemic,” “Open CA Now” and “Esco is not NYC,” demonstrators standing on the corner of Broadway and Grand called for the state to reopen. As cars passed, some honking their support, they called for allowing  the return of business as usual and to normalcy; to the way things were before the COVID-19 pandemic hit this country.

“There’s no reason for this quarantine,” said one protestor. “It’s now become a political issue with the governor basically making decisions on his own. We were told this was a pandemic with exponential growth, but that hasn’t happened here in California. All these people are now at risk of losing their livelihoods and homes. The stress and anxiety of destroying an economy for the small possibility of a virus killing a few more people is doing so much damage, some, we fear, irreparable.” As of Friday, Newsom had lifted restrictions on the operations of non-essential businesses or shelter-in-place orders, prolonging the delay of going back to work for many in this community and state.

The fear of jobs lost and damage to the economy caused by lockdown orders was a common theme among the demonstrators. Many claimed to be unemployed and not knowing if their jobs would be waiting for them once lockdown orders were lifted.

“Over thirty million people in this country are now unemployed, the largest increase in United States history,” said one woman. “Some businesses may never recover and be forced to shut down forever, so where do their employees turn for work? Unemployment payments won’t last long-term, plus we want to work. We don’t want to depend on the government for assistance.”

Said another, “I think the biggest harm of this shutdown is that folks won’t want or won’t be able to open independent and small businesses. Then we will be at the mercy of Amazon, Wal Mart, etc. Downtown Escondido was just starting to shape up with new restaurants, bars, shops, the comedy club. Now we’ve lost that momentum and aren’t sure we’ll ever get it back.”

Though not officially, the protestors do seem to have an ally (some believing unlikely) in their fight for the end to the shutdown in that several area leaders, including Escondido Mayor Paul McNamara have called for an easing of restrictions. In last week’s edition of the Times-Advocate, the mayor said, “The City of Escondido has tried to take a common sense measured approach to this whole restriction. We have people suffering. We are looking for ways to get them back to work. We are asking the health care professionals—now that we are two months into it—to review the methodology and see if we can we apply them to nonessential businesses to get people back to work and the economy started again.” 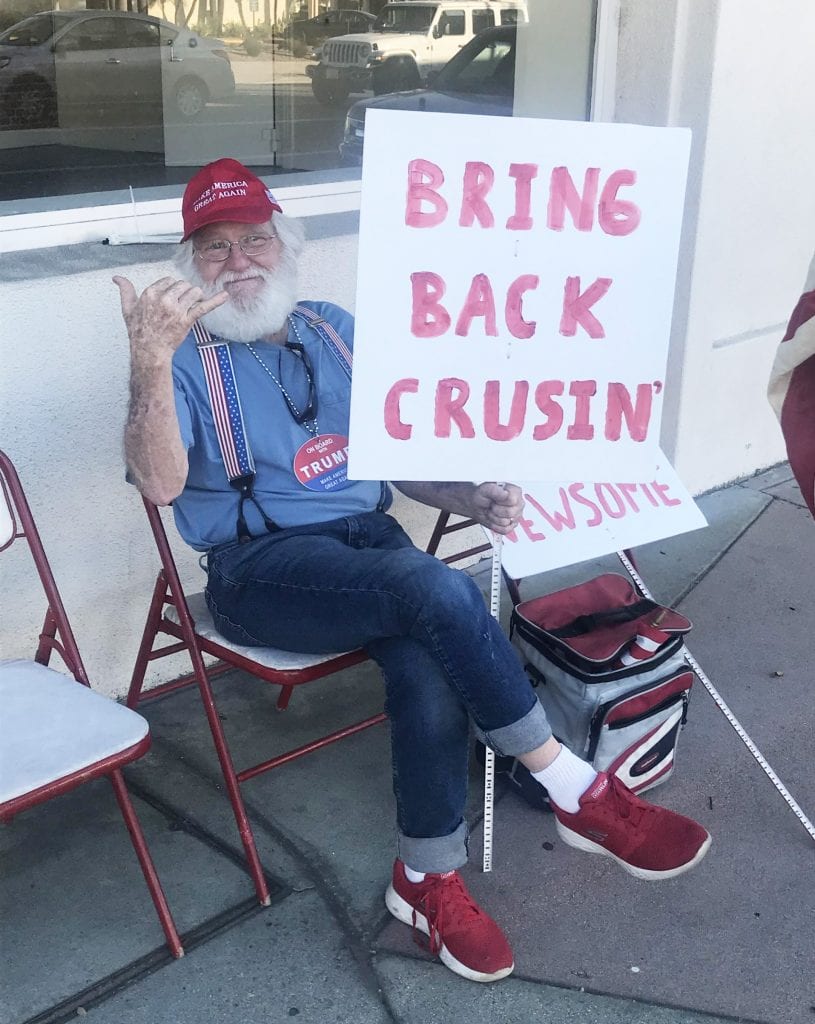 Cruisin’ Grand was canceled (or at least postponed drastically) this year as a result of the COVID-19 pandemic, a major blow to the local economy. Photo by Jonathan Day

This is welcome news for many people in this city, including one protestor who agrees with the mayor. “We need to get back to work. If you feel you’re at risk — mask up or stay home, but that shouldn’t stop the rest of us from living as normal and working to provide for our families. Shutting down is not the answer. You don’t lock down society as a whole.” Declared another, a mother of three, “I am not afraid of this virus. I would rather chance it to stand for our freedoms than roll over and do nothing. This is not about wanting a haircut—this is about the future of our country and children living in it. They deserve the freedom we’ve enjoyed, the freedom upon which we were founded.”

On Tuesday, Governor Newsom announced that some retail stores, including bookstores, sporting goods, flower and clothing shops, can reopen given the approval of their local officials and certain changes made to operations such as requiring workers to wear masks, limiting occupancy and, in some instances, allowing only curbside pick-up for customers. He did, however, say “We’re not going back to normal. It’s a new normal with adaptations and modifications, until we get to immunity and a vaccine.” See related story, front page.

While good news for some, this may be sure to stir up mixed feelings among many others, including those continuing to protest in their local communities and at the state capitol who want most, if not all, restrictions lifted sooner.

Proclaimed one demonstrator, “This stay-at-home order may work against the Governor and other politicians in this state. People are informed and waking up. It’s all we can do. Even people in Canada and around the world are organizing protests about stay at home orders. It’s building momentum.”

According to organizers, more protests are planned for various parts of the county, including Downtown San Diego, Encinitas and again in Escondido on Friday.