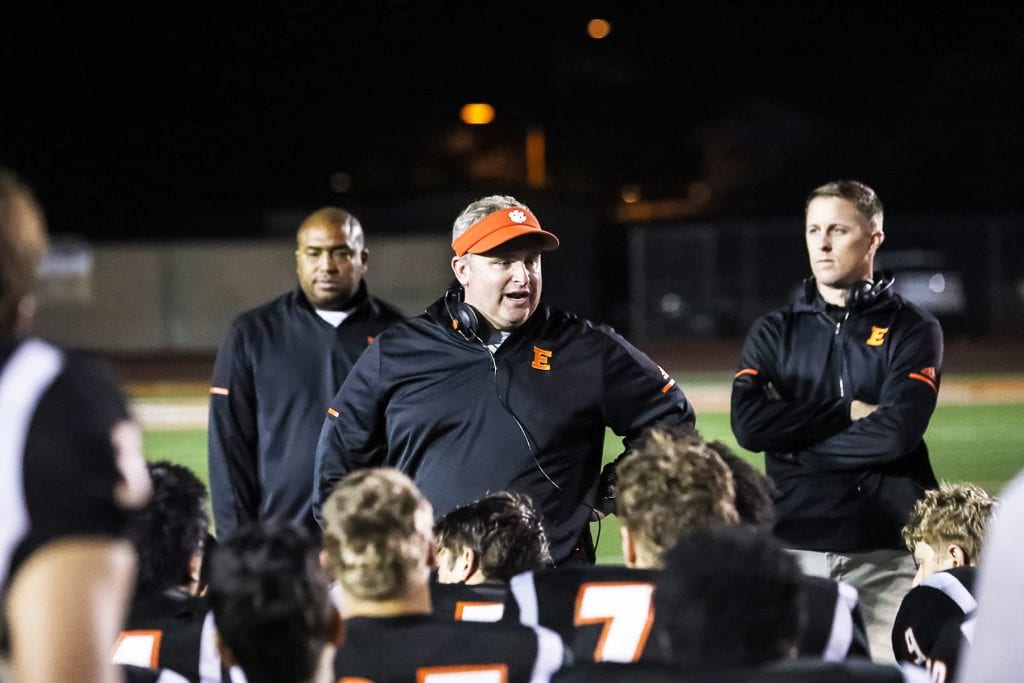 Because of a quirky circumstance this school year, the high school football season has been accelerated and pushed up.
As a result, all but one of the prominent Escondido-based gridiron teams are scheduled to begin play this coming Friday night, barely halfway through August. In the minds of many coaches this has created an exceedingly inconvenient start-up time but nothing will alter the situation. It’s a reality that must be dealt with so regardless of what seems to be a rushed beginning to the season, the local squads had best be ready to tee it up when things commence for keeps later on this week.
Here is a brief overview of the teams that should be interesting to watch.

Calvin Christian – Guided by a skilled coach in Randy Kreglow, the Crusaders have become a heavyweight in the 8-man ranks, appearing in three straight championship tilts. A winner of 19 of its last 21 games, Calvin figures to be tough again, although it will have to offset some key departures due to graduation.
Sophomore quarterback Brandon Nelson looks to have legitimate upside but he’s got some big shoes to fill in replacing the decorated Matt Lafler. However, the Crusaders should boast a dangerous running game with productive backs Evan Senti (616 yards, 10TDs) and Wesley Salzman (602 yards) returning for duty. When Nelson does go up top, look for the sizeable Noah Brouwer to be one of his main targets.
On defense, two-way practioneers Senti, who garnered 81 total tackles last season as a linebacker, and Brouwer, who amassed 68 of his own while operating out of the secondary, should be the mainstays.
Other Crusaders to keep an eye on are Bryce VanderWoude (OL, DL), Ethan Brouwer (lineman) and Paco Corona (DB.)
CC will be the last of the Esco teams to begin the season when it opens up with a home contest against San Bernardino’s Public Safety Academy on August 24.
Classical Academy – In the recent past even number years have proven to be winning ones for the Caimans, who hope that trend continues after going 5-6 in 2017. Fifth-year coach Jon Goodman believes that because his team is up to speed on the X’s and O’s and has put in more than the requisite work in the weight room, the prospects for success are present.
Classical has a promising runner in Damian Castaneda (357 yards) and an intriguing athlete in QB James Duncan. But if the Caiman offense is to truly percolate, Duncan will need to connect on a higher percentage of passes while cutting down on his number of interceptions (13.)
Meanwhile, physical middle linebacker Nate McCarthy will spearhead the defense as he tries to better his 78 tackles from last season. Versatile Diego Preciado is also expected to be a factor, whether at defensive back or receiver.
For a variety of reasons, the Caimans hope their opener will be one to savor when they embark on an exotic trip to the island of Oahu to take on Waimea this Friday evening for what will be a 10 p.m. start, PST.

Escondido – Now in his third year as head coach, Jud Bordman has done a nice job of creating a positive environment in addition to getting his team to show steady improvement. As such and with 10 starters returning, the Cougars appeared primed to have their first winning season since 2009.
Now armed with a year’s experience and having shown flashes of immense potential during his freshman season, signal-caller Robbie Ramos could make a quantum leap forward as he prepares to once again guide the Cougs’ spread attack.
The dynamic Shawn Moskowitz is geared to have an impactful year positioned at wideout while running back Matt Malone and wide receiver Victor Seneres will be counted on to make substantial contributions. The offensive line should be solid with center Ricardo Cervantes and tackle Joseph Morrison playing lead roles.
If the defense is to make a mark as many expect, gifted defensive ends Lance DeSorbo and Mason Malone will need to keep producing at a high level. DeSorbo, in particular, always seems to be around the ball and disrupting things.
When it comes to having a loaded back end, count Esco among the few teams endowed with that luxury. Blessed with a secondary that numbers three starters in Moskowitz, Max Del Bosque and Sincere Gillon, that amounts to an enviable trifecta that can effectively defend the pass as well as rapidly close and deliver hits.
The Cougs will look to get things off to an auspicious start this week when they travel to Hilltop.
Escondido Charter – The White Tigers will not allow a winless campaign from last season to define them. Expecting to benefit from some valuable lessons learned, in addition to having gained plenty of empowering experience, EC’s coach Greg Brose is convinced that not only will his team grow from the aforementioned adversity but things are in place for Charter to realistically challenge for both a playoff spot and league title.
The White Tigers are hopeful that Georgiy Begaliyev and Chase McMahon, currently slated to share the quarterbacking duties, can put their smarts and athleticism to good use. The backfield is four-deep and offers promising runners imbued with a combination of speed, power and agility. Charter’s prominent pass catchers are projected to be the sure-handed Shane L’Etoile and big-target tight end Aaron Bolas. Moreover, the line has a real rock in center/guard Sam Lawson.
And though the D-line should be able to hold its own, it is the linebacking corps that truly stands out. Thumper Begaliyev is a force on the outside while Matt Shams also makes a statement on the perimeter. Moving inside, Rhiggs Relatores and Bolas combine to form a pair that can plug a hole and be efficient.
Lastly, in the secondary are another couple of gamers in safety L’Etoile and versatile cornerback Ivan Rubio.
EC will get its first shot at redemption this Friday night when it hits the road for an away game against Southwest (SD).

Orange Glen – Last season didn’t go as the Patriots had anticipated as they suffered through an admittedly disappointing 1-9 record but don’t be surprised if OG puts forth a much more positive showing in 2018.
In Jason Patterson, the Pats have an energetic and committed coach who is exactly the type that could orchestrate such a revival. Furthermore, there’s some bona fide talent to be found on both sides of the ball.
In running back Cael Patterson, OG has a second-team all-leaguer who proved he had a penchant for running to daylight last year while racking up 559 yards on the ground. Paving the way for Patterson will be a sturdy O-line that features the notable duo of center Felix Cazares and tackle Theo Thompson.
And if the Pats can get a poised and workmanlike effort out of young QB Ethan Villalobos, then the outlook becomes even more encouraging. Furthermore, if resourceful wideout Christian Gonzalez Torres can consistently get open, he has the wherewithal to turn the Pats’ aerial attack into a real weapon.
Though the defense did yield too many points a year ago (355), expect that unit to be considerably more stingy given the personnel that is coming back. Assertive middle linebacker Julien Lesa (83 total tackles, 44 solo) can be a Pac-Man when it comes to gobbling up anyone who dares carry a ball in his vicinity. On the outside, Dylan Ewing is another backer who has demonstrated he can get the job done. In the trenches, nose guard Carlos Galan and rugged end John Simmons, each of whom registered 49 tackles in ’17, can create more than their share of havoc. And finally, there’s cornerback Jeremiah Castro-Frausto, a solid performer to be sure.
Seeking their second winning season under Patterson, the visiting Pats hope to get the better of Clairemont when they head towards the coast for their lid-lifter on the 17th.

San Pasqual – Veteran mentor Tony Corley begins his 12th year at the helm and he’s hoping that his squad can at least match or perhaps even exceed its 7-5 record from the ‘17 campaign.
The big question is can the defense be as stout as it was last season when the Golden Eagles allowed just over 15 points a game? If the answer is yes, it will all have to start with all-league inside linebacker Johnny Vega, an active and determined athlete who instinctively gravitates to the ball and racks up tackles at an impressive rate. It is also expected that Vega will get plenty of assistance from fellow defenders like physical end Ben Lee, nose tackle Isai Ramos and dependable safety Adam Price.
The offense appears to have the tools to put points on the board but much will be predicated on the performance of a new quarterback – that being either Trevor Jungman or John Carey, each of whom is up from the junior varsity. Right now, give the inside track to Jungman because of his running prowess, which fits nicely with SP’s ground-oriented attack. The line upfront is capable of creating holes and providing ample protection thanks to three returning letterman in the personages of tackles Rudy Archuleta, Jose Juache and guard Adrian Trejo. Stationed behind the QB will be speedy halfbacks J T Hoffman and Dino Beltran, who have the ability to get loose and pick up consequential real estate. Plus, fullback Mark Santar offers a nice complement to his backfield brethren with his gritty style and knack for getting those tough inside yards.
Friday night the Golden Eagles will answer the bell when they play host to a team from way down south, Sweetwater.
Writer’s Note: Some information used in this article was found in Union-Tribune preview pieces authored by John Maffei and Terry Monahan.