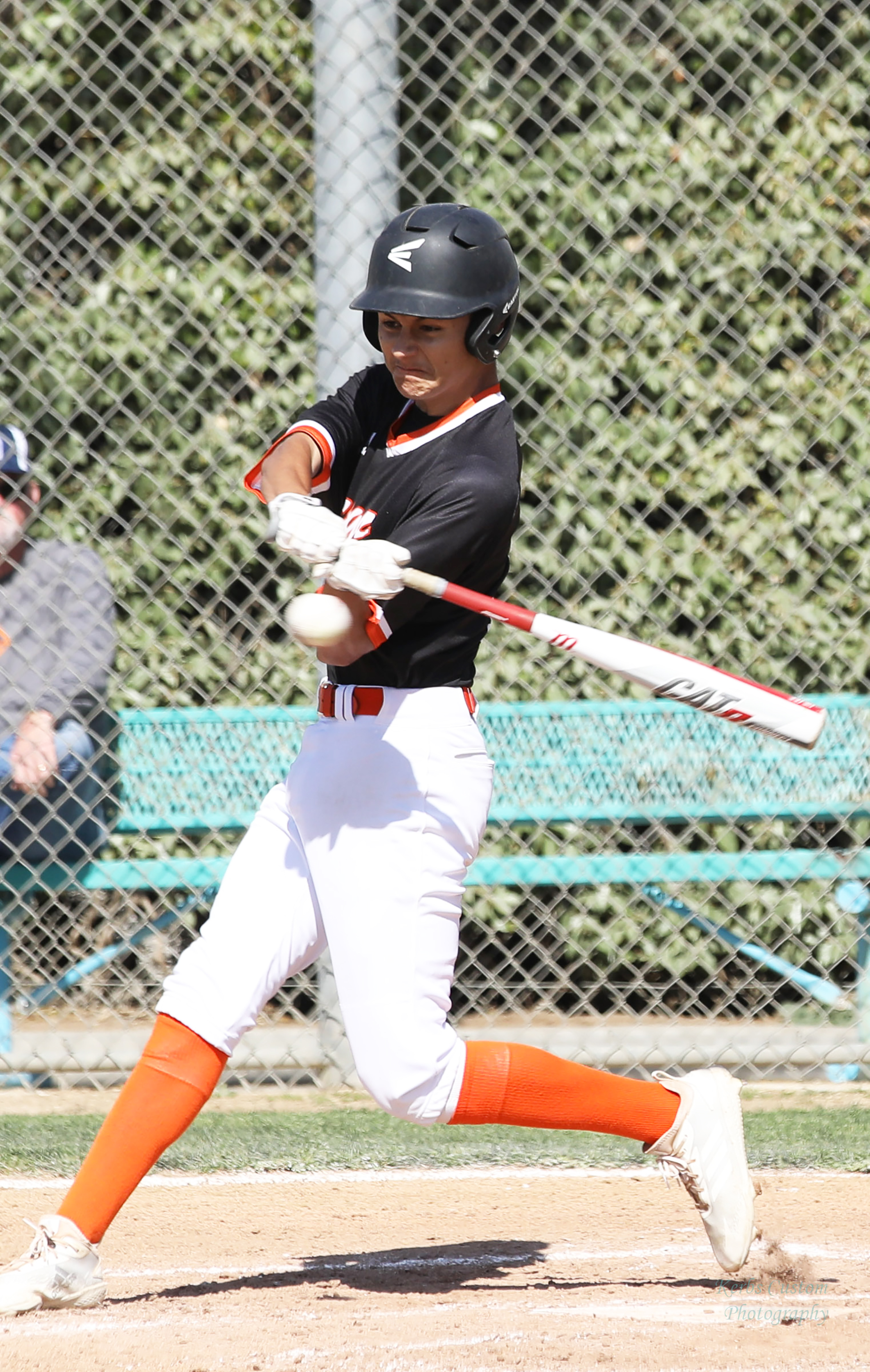 Sophomore RJ Talingo delivered one of Esco’s five hits in the Cougars’ 1-0 win over the Jags. Photos by Lenny Kerbs

In one of the best pitched prep games seen thus far this season in the North County, visiting Escondido High scored a first-inning run and managed to make it hold up while defeating league rival Valley Center 1-0 on a picturesque Monday afternoon up on “The Hill.”

It was a contest that was dominated by a pair of hurlers with distinct and contrasting styles. For Esco, it was right-hander Charlie Perkins-Turner who occupied the spotlight. Tall and with a deceptive delivery that can hide his pitches, the strong-armed senior has plenty of pop on his fastball and can make hitters look beyond bewildered with his knack for hitting the black right at the knees.

Meanwhile, his counterpart in this memorable matchup was a lanky lefty named Isaac Nelson, a youngster who wasn’t even on the VC varsity when the campaign began. But masterfully locating his pitches and keeping the Cougars clearly off-balance, Nelson was a revelation as he seemingly grew in confidence with each and every delivery that he offered.

By the time this briskly played contest was done, all one needed to do was take a gander at the stat sheet to realize just how firmly in control were these two twirlers. In his six innings of standout work that ultimately earned him the victory, Perkins-Turner was absolutely smothering at times—allowing just a solitary hit while fanning 12 Jaguar hitters.

As for Nelson, he was nearly as baffling, surrendering just five hits while retiring 14 batters in succession during one stretch of his complete game effort.

The sole run of the contest came early when—with two out in the top of the first—Escondido’s accomplished Juan Cervantes drilled a shot that carried over the head of VC right-fielder Colton Mayfield and bounced off the fence for a ringing double. Moments later, it was Perkins-Turner himself who provided all the offense he would require when he laced a liner down the left field line for an RBI single.

But Perkins-Turner was just getting started with his flair for the dramatic because over the next three frames he would author virtual perfection, retiring the first nine batters he faced – all on strikeouts. It was a feat that not only had those in attendance marveling at the wonder of it, but also had his veteran coach truly amazed. “I’ve been involved with this game for a long time,” said skipper Aaron Hoofard, “and I’ve never seen that.”

Of the nine K’s that Perkins-Turner rung up at the game’s outset, eight came on swinging strikes, indicative that he was spotting his heater with precision and that the Jags simply couldn’t get around on it.

It wasn’t until the fourth inning that VC finally got a runner aboard when Shay Larrabee battled from behind in the count and worked Esco’s dealing righty for a walk. And then what happened next almost didn’t compute. Pouncing on a sacrifice bunt attempt and with plenty of time to get  Larrabee at second, Perkins-Turner – who had been so accurate with almost all of his pitches – uncorked a wild throw into center that eventually led to the Jags having runners onboard at second and third with nobody out.

Suddenly confronted with having to deal with a genuine crisis, Perkins-Turner was able to escape unscathed when he got Frank Stehly to line out to shallow right, caught Riley Baranowski looking at a called third strike and after issuing a free pass that loaded the bases, induced Darrow Toler to sky out to left field. 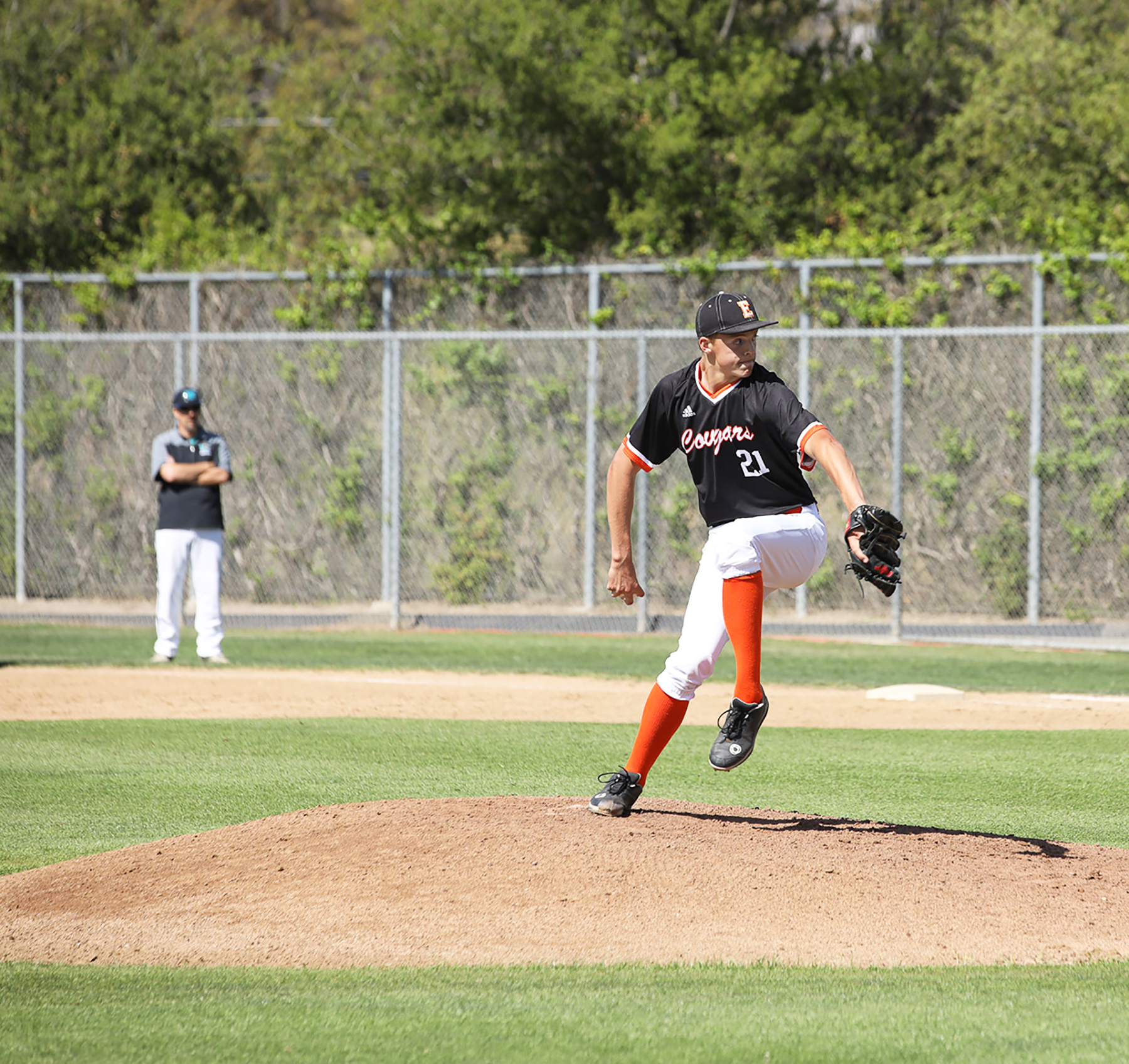 Escondido right-hander Charlie Perkins-Turner wowed onlookers by striking out the first nine batters that he faced.

But the Jags were able to hang tough because Nelson was pitching lights out and keeping the Cougars at bay. The competitive southpaw was clearly in a groove when he retired Esco in order from the second through the fifth inning. And though he encountered a rather dicey situation in the seventh by yielded singles to sophomore RJ Talingo and defensive hero Malone, he nonetheless extricated himself from the threat when he got Victor Seneres to bounce out to third.

Coach Hoofard elected to call on the versatile Cervantes to wrap things up in relief of Perkins-Turner and that’s exactly what he did but not without a bit of unease. After getting Stehly to ground out, Cervantes was reached for an infield single by Ryan Hakes who pulled a well stroked ball into the hole at short. But then in what seemed like the blink of an eye, Hakes was the victim of an exquisite pickoff move from Cervantes whose throw was right on the money to first sacker Justin Fox. Moments later, Toler was tossed out on a grounder which meant that this taut and tight contest belonged to the Cougs.

With the win, Esco improved its overall record to 9-15 while earning its second victory in nine Valley League outings. But don’t be deceived by those rather modest numbers because this is a club that is definitely trending in the right direction.

Winners of five of their last six, the Cougars are coming off the high point of their season having just last week captured the 5A Division championship at the prestigious Lions Tournament – a five-game gauntlet in which the talented Cervantes batted around .600, pitched a shutout and earned MVP honors.

Early in the year, the Cougs were scuffling because of injuries to key personnel while trying to get a number of first-year or somewhat inexperienced players up to speed so that they could become legitimate contributors. It’s been a gradual process with some definite growing pains along the way but there’s no doubt that things are clearly coming together for Esco as the campaign is winding down. “We’re definitely playing better and making a lot more plays,” said Hoofard. “And anytime you start to win, your team’s confidence builds and that’s really good to see. There’s no doubt that things are finally clicking.”

Whether the Cougars can overcome their sluggish beginning and qualify for the postseason remains iffy but with some genuine momentum now behind them, they’ll look to finish out the regular season on positive note and take pride in how they’ve been able to resurrect a season that very easily could have slipped away from them.

As for the Jags, their first season under Coach Jeff Robinson now stands at 6-16-1 overall with a 2-7 slate in the VL. And like the Cougars, VC’s profile was enhanced with a nice run of its own in the Lions tourney courtesy of three wins that advanced the Jags into the 3A Division semifinals.

A tough schedule with no cupcakes and having to adjust to their third coach in as many years, figured to make this a challenging season for VC but the program is definitely on the uptick. “We’re battling now and competing in almost every game,” said Robinson. “And what’s more, the guys are having fun. Understandably, it took a while for the players to buy into another new philosophy but now that they have, things are looking pretty good.”

Currently, the Jags are in a promising position to advance to the postseason and should they get there, Robinson expects them to be a real factor in the Division IV ranks.

The Cougars and the Jags have two more games scheduled this week to decide who will own the bragging rights between these two nearby rivals. But one thing’s for certain. It’ll be damn near impossible to duplicate the compelling pitching duel that was on full display last Monday. 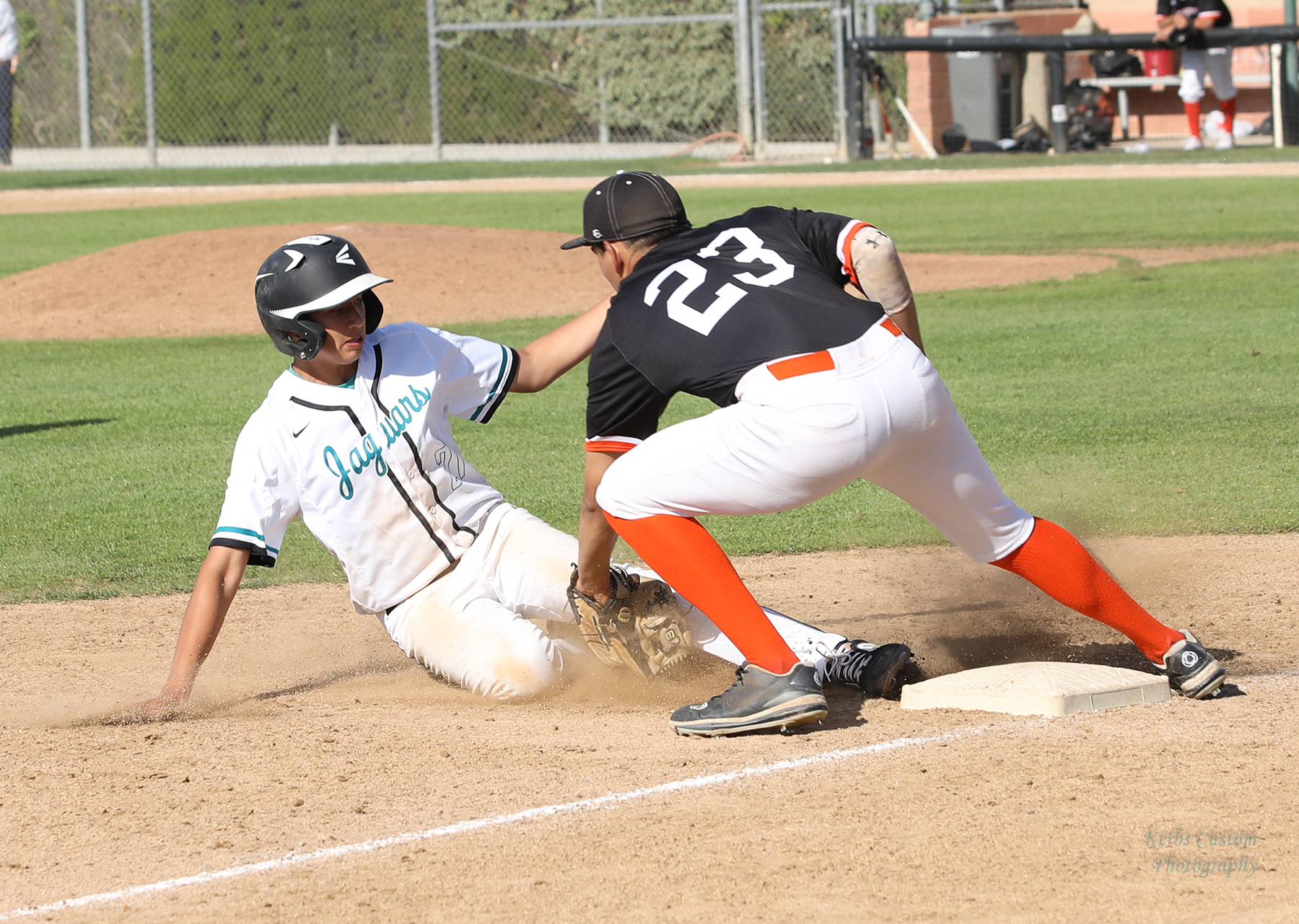 Cougar Juan Cervantes applies the tag on VC’s Isaac Nelson who was thrown out trying to advance on a fly ball to center field.