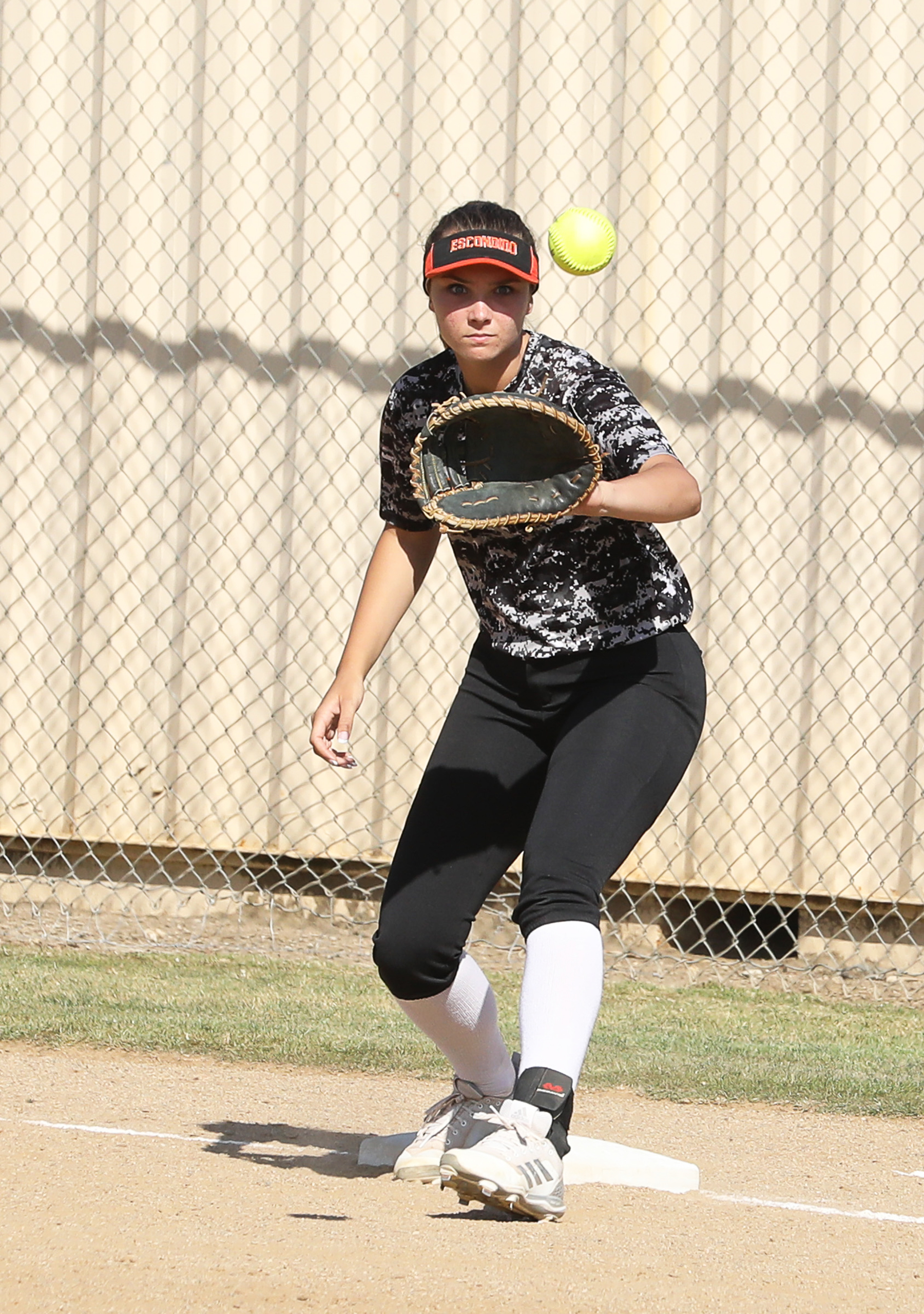 Escondido’s Rylee Penrod, shown here awaiting a throw to first base, belted a home run and produced a sac fly in the Cougars’ 7-3 playoff win over top-seeded Grossmont. Photo by Lenny Kerbs

Of the four local softball teams that qualified for the CIF playoffs, the one that made the deepest and most impressive run was the squad from Escondido High.
Competing in a very testing Division I, the Cougars started off with a play-in victory before springing the bracket’s biggest upset when it stunned top-seeded Grossmont. However, Esco wasn’t able to advance any further when it was nipped by Eastlake in the second round.
But that loss, which left the Cougars with a final 16-15 overall record, hardly detracted from what was an admirable playoff effort. Coach Cary Weiler’s club had done itself proud with the results it achieved and the caliber of play it exhibited in the postseason.
Escondido’s playoff journey began on May 15 with a play-in contest versus Del Norte. The 8th-seeded Cougs made quick work of the Nighthawks (12-14), scoring four runs in the second inning while racing out to an insurmountable 9-0 lead. By the time the game had concluded, Esco had tallied in five of seven frames in addition to having amassed a remarkable 20 hits during an eventual 12-4 win.
This prolific offensive display had plenty of key contributors. Senior Hannah Ice was highly instrumental in the onslaught, driving in four runs with a pair of hits that included a double. Talented sophomore Kayla Carter also had a big afternoon, delivering three hits and three RBIs. Standout outfielder Xzarria Simmons was perfect while rapping out four hits that led to a ribbie and a run scored. Another soph who left an indelible mark was Mackenzie Lefebvre who manufactured a brace of hits and RBIs while Christa Shelton’s two safeties, which featured a noteworthy triple, enabled her to score a pair of runs.
On the mound, it was Ice who was steady and got the job done. The right-hander went the distance while allowing just a pair of earned runs.
Two days later, the challenge was the ultimate one as the Cougs faced off with the heralded Foothillers, the No.1 seed. And early on, it looked as if Grossmont (21-11) was headed for yet another victory when it jumped out to a 3-0 advantage. But Weiler’s crew didn’t panic and rallied with a run in the fourth and three more in the fifth to seize the lead. A three-spot in the top of the seventh gave Esco some much needed breathing room and helped put things away.
The bats that proved most decisive in this memorable triumph were those of Ice (2H, 1RBI) and fellow senior Rylee Penrod (3RBIs), each of whom flexed her power with a home run shot. Moreover, Lefebvre continued to sizzle at the plate with three more hits and a ribbie.
Once more manning the bump, Ice again displayed her considerable moxie by hanging tough against a rugged foe while hurling another complete game (1ER) that clearly trumped her previous outing.
But on Saturday the 19th, Esco’s postseason push was brought to a halt by Eastlake (No. 4 seed) when the host Titans eked out a narrow 2-1 win. It was a disappointing setback from the standpoint that the pitching had certainly held up its end but an attack that had been so productive in the prior two games simply cooled off when it could ill afford to do so.
Nonetheless, anytime a club can put up multiple wins in the playoffs, it’s done something worthy of mention. The Cougs can certainly walk away with heads held high after their commendable postseason run.