Esco kicks off VL play with three-game sweep of Jaguars 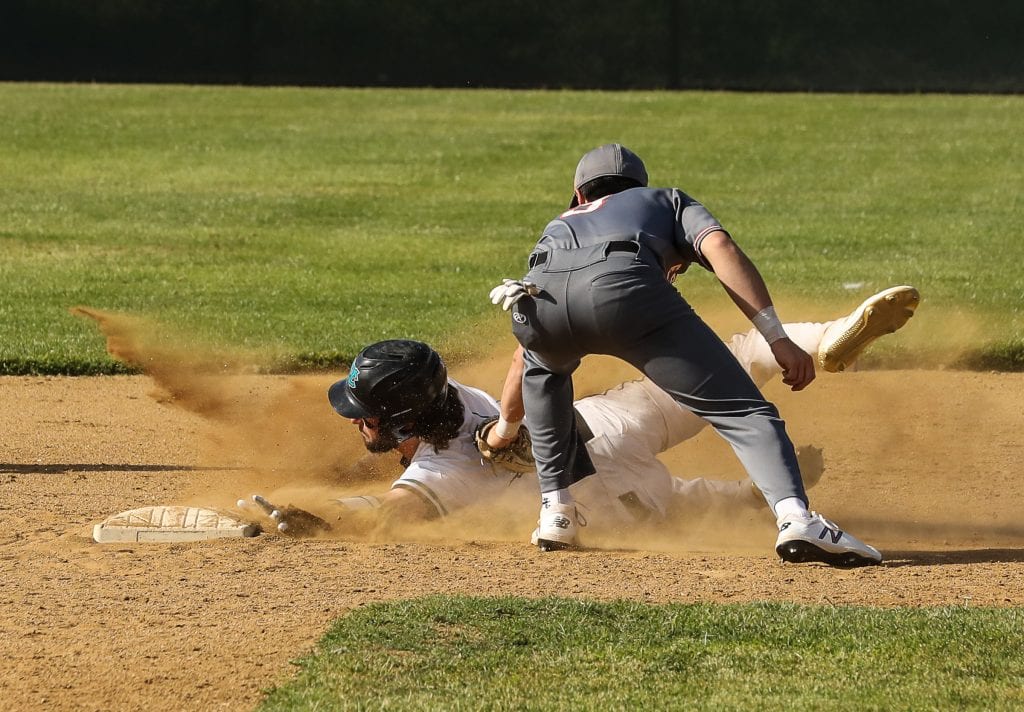 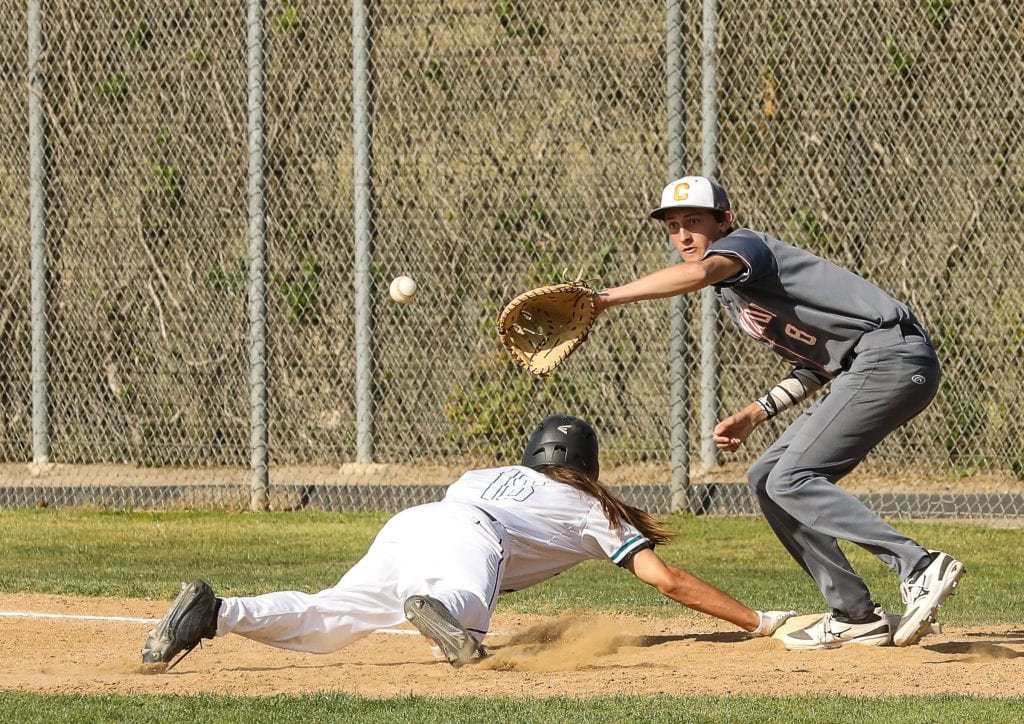 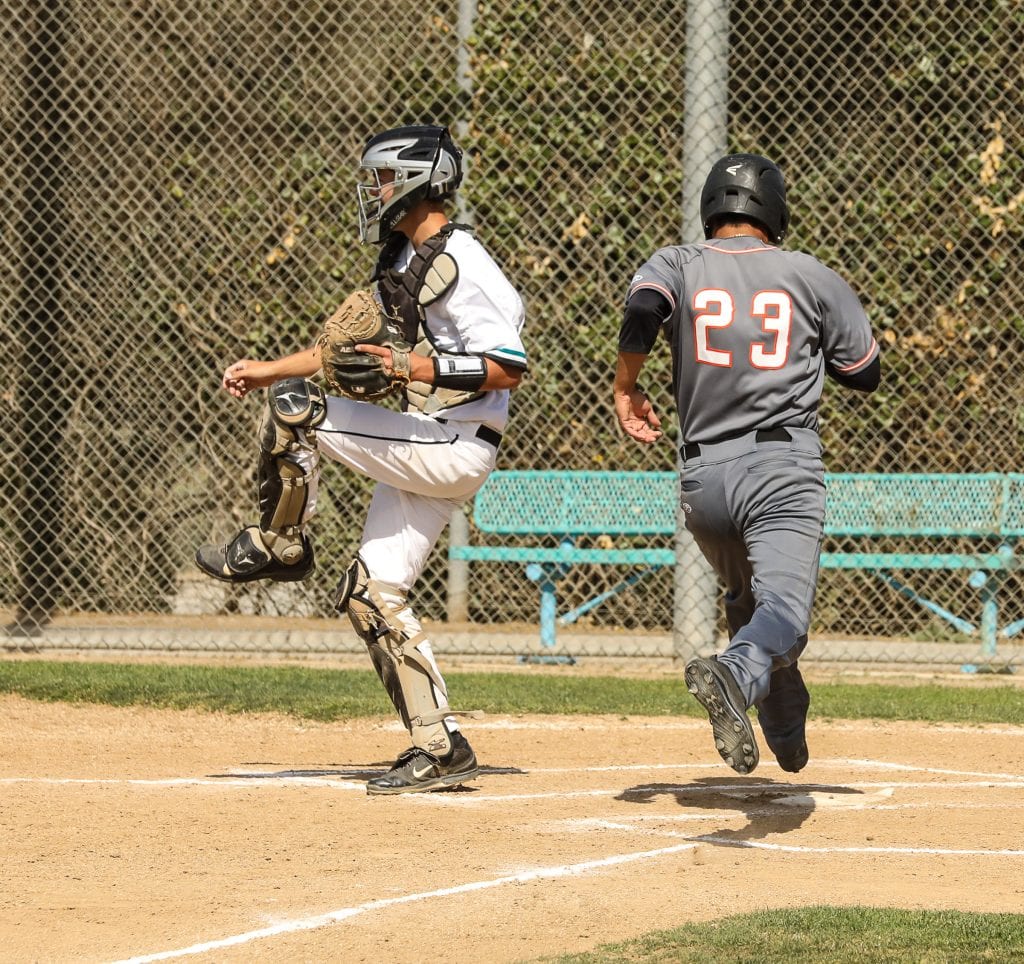 Escondido’s Juan Cervantes prepares to step on home plate as VC catcher Riley Baranowski high steps out of the way. Cervantes scored the Cougars first run in an eventual 6-4 victory that completed a three-game sweep of the Jags. 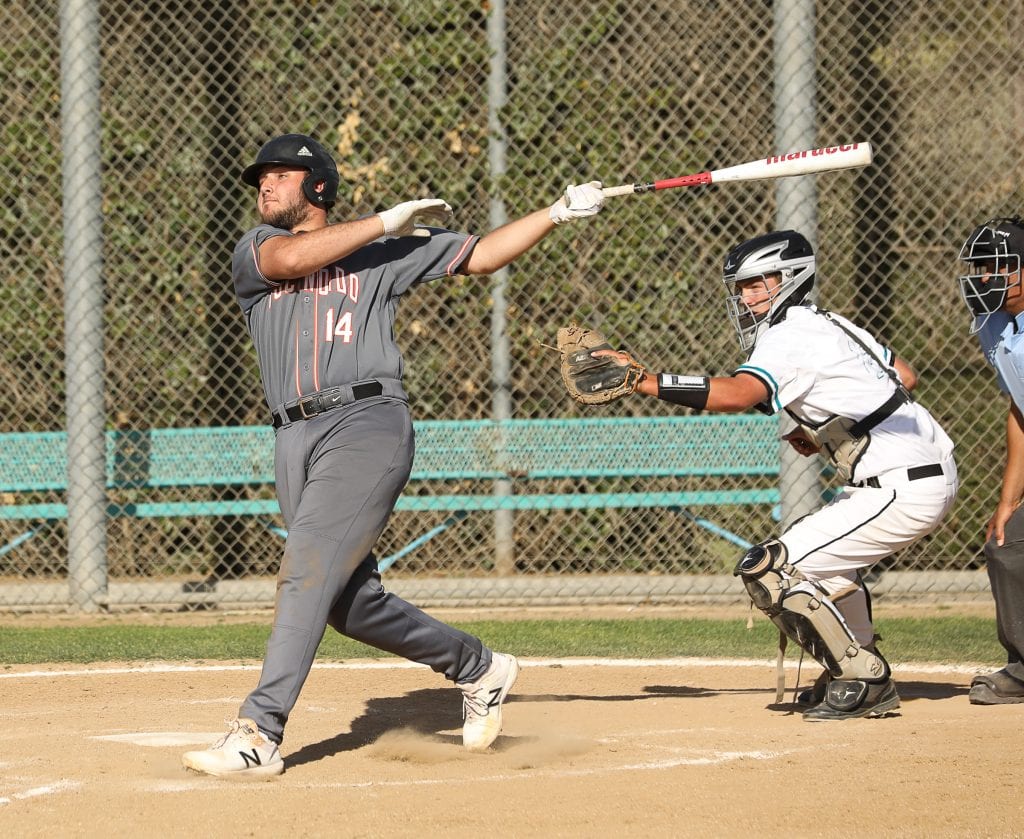 Two timely and clutch double plays down the stretch loomed ever so large as the Escondido Cougars held on for a 6-4 win over host Valley Center High last Friday afternoon.

Not only did that victory improve Esco’s overall record to 9-7 but it completed a sweep of a three-game series with the Jags. As a result, the Cougs currently sit atop the Valley League standings at a perfect 3-0 slate.

Heading into Friday’s action, Esco had already twice bested the Jags earlier in the week by counts of 11-4 and 10-0. Now on a bit of a roll, the Cougars were looking to bring out the brooms as the series finale commenced.

But early on Cougar starter JP Pasch, a solid lefthander who possesses a sneaky fastball and a serviceable assortment of ancillary pitches, struggled somewhat finding his release point and walked two hitters in the bottom half of the first inning. Soon after, VC’s Darrow Toler produced a sacrifice fly that staked the hosts to a 1-0 lead. This marked the one and only time the Jaguars held an advantage during the entire three-game set.

A frame later, EH would jump ahead. Harrison Mullany’s second hit of the day, Brenden Garcia’s floating single to center and an intentional walk to Cervantes eventually juiced the bases. Next up was Moskowitz and he drilled a hard shot that went right through the legs of VC shortstop Shay Larrabee and plated two more Esco runs. Whether Larrabee was distracted by Garcia crossing in front of him was open to question but the bottom line was that Esco now had the upper hand at 3-1.

But the Jags, possessors of a 3-12 overall record and  hoping to avoid a 10th straight loss, battled back in the fourth and parlayed a hit batsman, two singles and a wild pitch into a two-spot of their own which brought the count back to all even.

Then came the fateful sixth inning. Stout designated hitter Garrin Jackson, who stung the ball repeatedly throughout the VC series, led off with a rope into right that went for a single. Jackson had been particularly memorable in Tuesday’s contest when he mashed a 400-foot three-run homer before crushing another drive that missed by a mere two feet of being yet another dinger. On that occasion, he had to satisfy himself with a monster double.

With a substitute runner on for Jackson and two outs, Esco coach Aaron Hoofard went to his bench and called upon pinch hitter Charlie Perkins-Turner. And it wasn’t long before the junior was making his skipper look like a flat-out genius when he served a slicing hit into right that brought in the go-ahead tally. Thanks to subsequent singles from Anaya (a grounder past third) and sophomore Victor Seneres (who plays with a presence belying his age), the Cougs were able to tack on a couple more runs which extended the difference to 6-3 and put them in prime position to complete the sweep.

But much to their credit, the Jags weren’t about to go away without making things extremely uneasy for Esco in the final two frames. In the home half of the sixth, Toler turned on a fastball and blasted it over Cervantes’s head in center for a loud double. And after a wild throw and a hit batsman, Hoofard decided to relieve the gritty Pasch and summon his ace hurler, Cervantes. Not surprisingly, Cervantes proved up to the task as he induced Cumming to hit into a force out at first and when Toler made a break for the plate, Anaya rifled a perfect strike to his receiver Moskowitz who applied the tag out on the VC runner – the end result being a pivotal double play. A comebacker to Cervates soon after ended the inning.

But the resilient Jags were to make Esco sweat even more in seventh by putting the potential winning run on first base with just one out. The inning started harmlessly enough when Cervantes got Alex Hakes to bounce out to third. However, VC began mounting a bona fide comeback attempt when Cervantes lost Austin Files and walked him after being ahead in the count. Scrappy second baseman Zach Mahrenholz then authored his second hit of the afternoon by scalding a shot into center. And when Tuupash Turner followed with a flared single to right, suddenly the Jags had the sacks loaded and were coming to life.

And VC’s prospects looked even more promising when Larrabee, the team’s most talented and dependable hitter,  coaxed an RBI base on balls that drew the Jags to within 6-4. By now the home crowd was really in it and when Cervantes fell behind 2-0 to Toler, the game’s critical mass had been reached. But Cervantes is nothing if not tough and tenacious as he conclusively proved by getting Toler to rap a bouncer to shortstop Garcia who smoothly initiated a game-ending 6-4-3 double play. And just like that, the Jags’ budding rally was snuffed out and the Cougs were celebrating a satisfying sweep over their nearby neighbors.

When Esco was wrestling with a record of 6-7, Hoofard felt that if the Cougs could just start swinging the sticks with more consistency and tighten things up on the defensive end, their fortunes might turn and sure enough, that’s exactly what’s happened. Showing some real prowess at the plate, EH put up a hefty 27 runs versus the Jags. Their defense also shined with Garcia, a fluid fielder with a splendid arm and Moskowitz, who blocked numerous balls in the dirt and threw out would-be base stealers as well, showing the way.

Now with some genuine momentum on their side and arguably playing their best ball of the season, the Cougars will try to use their success over the Jags as a springboard towards even bigger and better things as they pursue a possible VL crown.

For the time being, thanks to a pair of propitious twin killings, all is well in Cougar land.