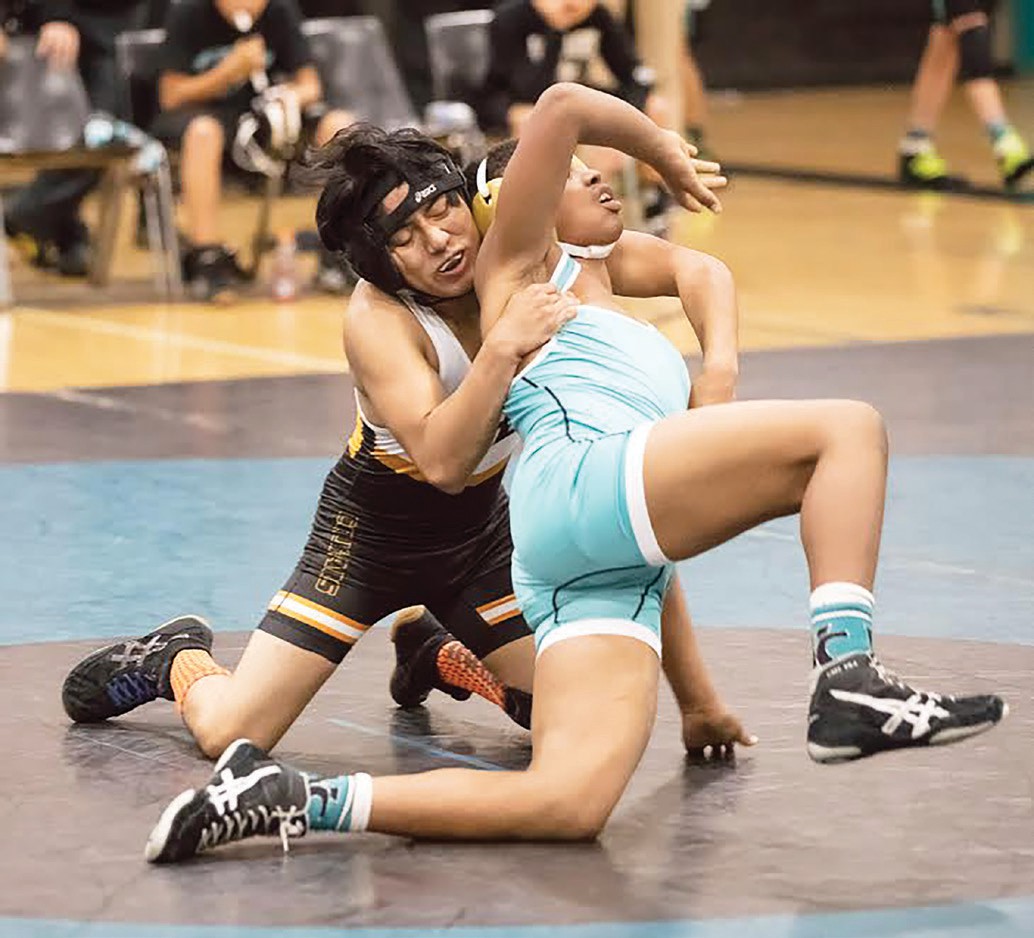 Escondido veteran Anthony Reyes put his experience to good use during his technical fall victory over Jeremy Gray. Photos by Lenny Kerbs

In a performance that demonstrated its technical skill, toughness and want-to, the Escondido High wrestling team established a sizeable advantage midway through last Thursday’s night match against host Valley Center and though challenged late, eventually secured a solid 44-27 victory in the Valley League opener for both squads.

The rugged Cougars parlayed five pins, a technical fall and a decision into the important win. For the Jaguars, a pin, three decisions and a pair of forfeits weren’t enough to stem the tide against the formidable Cougs.

Early on the Jags were the beneficiaries of a forfeit in 106-pound weight class. But then, Esco began its strong push with a pair of consecutive pins. Isaac Munoz set things in motion when he executed a forceful takedown before delivering a quick pin of Frank Mazzettie at the 113-pound level. Julian Rodriguez (120 lb.) was next up and he also controlled things early in his matchup with Brandon Tompkins before smothering his opponent with great leverage from up on top.

Another Esco forfeit, this one coming at the 126-pound division, enabled the Jags to square the score at 12 all. But this is the point at which the Cougs started mounting a defining run and won three straight confrontations. Junior Irvin Reyes (132 lb.) demonstrated considerable strength as he converted five takedowns and notable riding time into an eventual win when he was able to flip VC’s Payton Rutherford and pin him in the third period.

Next it was Anthony Reyes’s chance to shine and he put on quite a show in besting Jag freshman Jeremy Gray in a 138-pound tussle. The senior Reyes utilized his considerable experience advantage to the max, producing multiple takedowns while building up a huge lead. But the game Gray became a crowd favorite with his three escapes and absolute refusal to be pinned although

Reyes continually had him on the brink of elimination. But the youngster ultimately became the victim of a technical fall (18-3).

Then, in the 145-pound class, it was all Karson Frank as he made his aggression and savvy 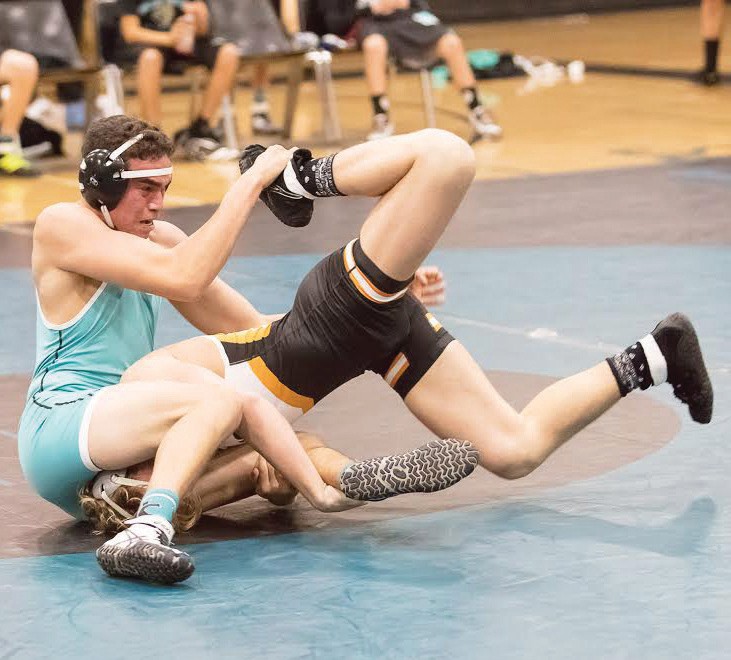 pay off. It would take Frank less than two minutes to put his VC foe Owen Bagstad on his back and pin his shoulders to the mat.

With VC desperately looking for something good to happen, it was left to Jag Braiden White to stop the bleeding and give his team some semblance of hope. And coming through in the clutch, that’s exactly what the senior did in his 160-pound tilt versus Remy Morris. Able to fend off his opponent for the most part, White was adept at riding and displayed a great surge of strength when he almost brought the proceedings to an end with a dramatic near fall. Though a Morris takedown made things interesting at 4-4 in the third period, White was undeterred and took charge late before earning a well-deserved 8-4 decision.

Perhaps inspired by White’s performance that immediately preceded him, VC junior Christian Cruz was the victor at 170 pounds. Showcasing a conspicuous wrestling IQ, Cruz was noteworthy as he employed textbook tactics, registered multiple takedowns and did some powerful work from up top. The result was an emphatic 8-1 decision over Michael Partida.

And then Anastas Serebryakov kept the Jag momentum rolling right along in a 182-pound affair with Greg Sandoval. In a low-scoring match, Serebryakov executed a nifty third-period escape before wowing those in attendance with a gutsy late takedown with less than 10 seconds remaining to secure a memorable 3-1 win.

Things then became even more compelling when Jag standout Manny Perez (185 lb.) seized the initiative right from the start in his match with Antonio Ramirez. Perez was aggression personified as he established immediate superiority with a takedown before concluding his outstanding effort with an efficient first-period pin.

With the Jags showing admirable resolve and having captured four straight matches, suddenly the outcome was back in doubt at 35-27. However, the Cougars’ Anthony Douglas (220 lb.) took it upon himself to restore order as he wrapped things up by out-dueling Brandon Hebron. Douglas jumped ahead with a nice reversal but a determined late escape by Hebron 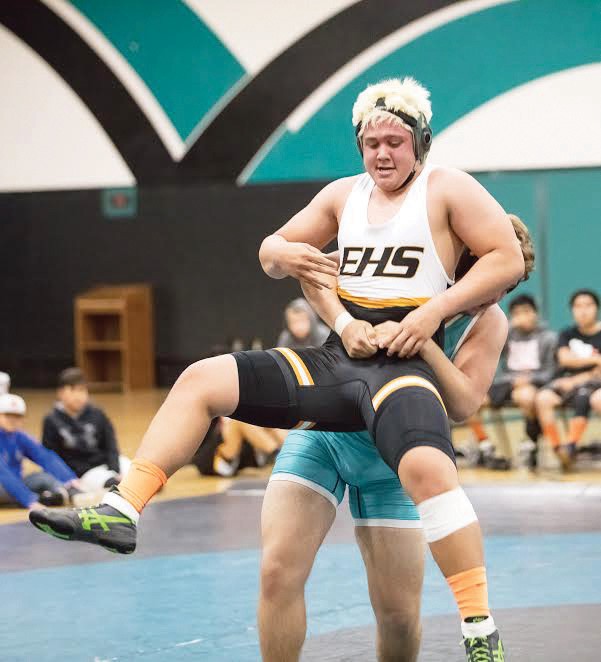 Although Cougar Anthony Douglas prevailed in a tight match, he nonetheless was hoisted off the mat by Jag Brandon Hebron.

had matters still up in the air. But Douglas was able to hold Hebron off and tack on a couple of more points in a pivotal 4-1 decision.

The night’s final match also went in Esco’s favor thanks to Zeke Rodriguez (285 lb). After a brief feeling-out process, Rodriguez asserted his will and produced a first-period pin in just over two minutes against Ulysses Zuniga. Rodriguez’s victory was a fitting capper to a fine Esco effort that brought the final count to 44-27.

Based on what they showed against the Jags, the Cougars look primed to make a strong run at a VL title. Their upcoming home match this Thursday versus Orange Glen could go a long way in deciding who might become the league kingpin. The Cougs will meet a sizzling Patriot crew that just registered a stunning 55-0 win over Fallbrook in which OG won all eight of the contested matches and executed four pins.

Meanwhile, VC quickly gave a clear-cut demonstration of its comeback capability. Not allowing the loss to the Cougars to fester or carryover, the Jags immediately snapped back over the weekend with a stellar tournament performance at Mission Hills High. VC placed a noteworthy second as both Perez, who is becoming dominant, and Alex Armenta (120 lb.) took home the gold by finishing first. Others instrumental contributors were Tommy Lavine (106 lb.), Brock Stehly (113 lb.) and Hebron (220 lb.), each of whom earned distinction by stepping up and placing third. VC will next try to build on this strong showing when it resumes VL competition this Thursday with a road trip to Ramona.

So for Jags, it was hardly a lost week as they gallantly rallied against Esco before regrouping in fine fashion at Mission Hills.

But the top kudos have to be reserved for the Cougs because of the way in which they took care of business on the VC mat. On that occasion, there was no guesswork as to who had exerted its will. The Cougars came prepared, motivated and unwilling to settle for anything less than a signature win.