Esco girls’ soccer made its own mark 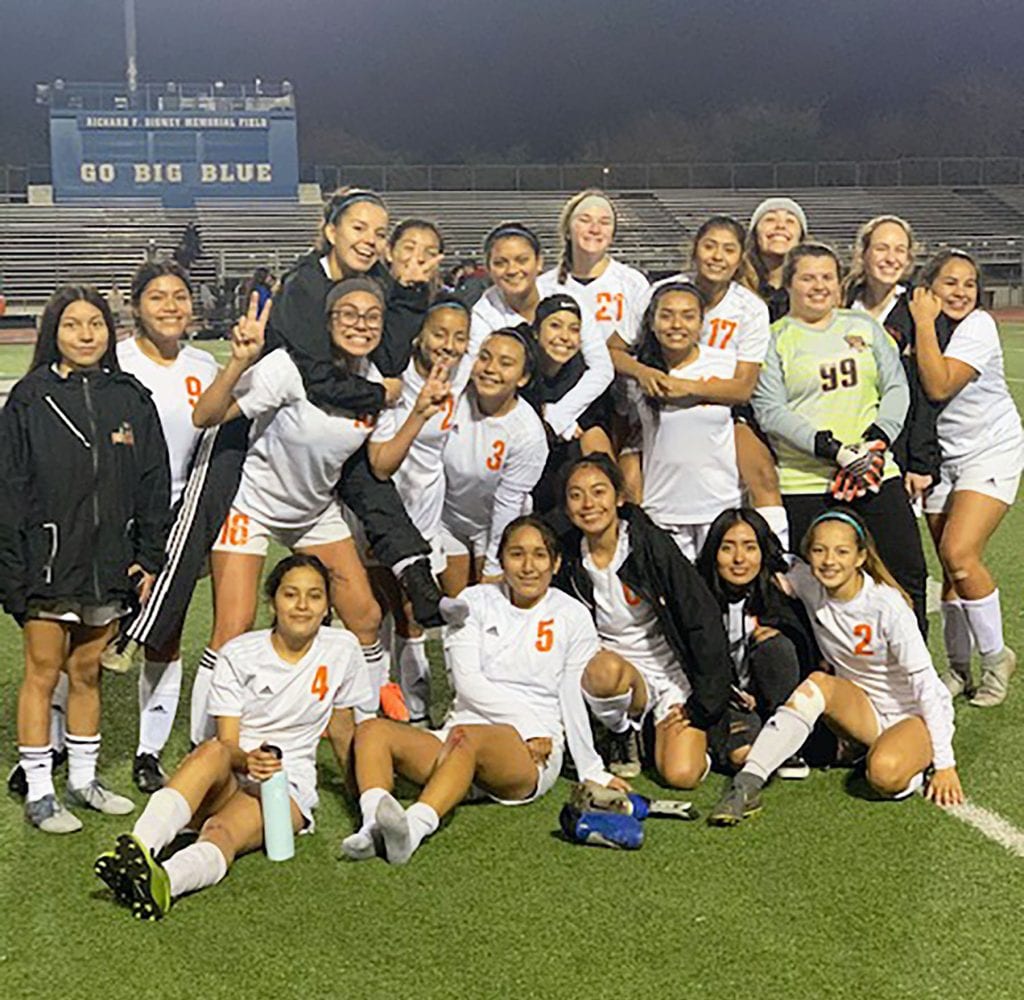 EH’s girls soccer team had every reason to smile over a splendid season. Photos courtesy of Greg Cacioppo.

When it came to performance on the soccer pitch, there can be no argument that Escondido High got monumental efforts from both genders during the 2019-20 campaign.

As has been chronicled here and elsewhere, the boys experienced a tremendous season, winning 18 games en route to reaching the CIF Division III finals before suffering a heart-wrenching 2-1 loss to Patrick Henry.

But perhaps not as well-known is the fact that the girls’ squad (12-8-4) also did Esco mighty proud with a splendid postseason run of its own that came up just short, falling to Rancho Buena Vista in a Division IV championship tilt that ended with the locals being nosed out 4-3 in penalty kicks.

Under the deft guidance of second-year varsity coach Greg Cacioppo, the EH girls had high expectations entering the recently concluded season. After making it to the playoff quarterfinals the previous campaign, the Cougars were looking to make a much deeper run in the postseason and had definite title aspirations in mind. And as it turned out, they were more than justified in having those lofty dreams.

Armed with a 20-player roster in which every girl knew and embraced her own specific role, the Cougs thrived as an extremely stout defensive squad that was well-organized, possession-based and operated on the tactic of building from the back, eschewing a kick-and-chase approach.

Because they were quite effective at advancing the ball from the defensive third, up through the transitional third and finally into the attacking third, the Cougars were often able to control tempo and thereby dictate pace. Making this style the bedrock of its play paid off handsomely for Esco.

But when asked about what was the most important key to his team’s success, Cacioppo spoke of something that hasn’t yet been mentioned: “More than anything else, we made a commitment at the beginning of the year to simply outwork our opponents,” says Cacioppo. “We were also a very competitive group that showed a lot of grit and heart. We decided to adopt an us-against-the-world mindset and the kids really bought into it. And finally, there was a closeness and togetherness on this team that was really special.”

With no discernable weaknesses and an adherence to doing things right, the Cougars finished an admirable second in the Valley League standings. Moreover, in what Cacioppo labeled as the club’s most satisfying win of the season, Esco took down San Pasqual for the first time in some ten years. Being able to finally get over that hump and get the best of the Golden Eagles was an achievement that not only resonated with Cacioppo’s players but gave them an added jolt of confidence.

Because of their solid regular-season performance, the Cougars entered the playoffs as a No. 3 seed and thereby earned a first-round bye. In a quarterfinal matchup with Classical, the Caimans opted to play deep and conservatively, hoping to force the game into overtime which to their credit, they managed to accomplish. However, Classical was living on borrowed time. In the extra session, the Cougs soon capitalized after pressing the attack and tallied the game-winner in a 1-0 victory.

Next up was a home semifinal game versus San Ysidro and spearheaded by a pair of second-half goals, the Cougs had their way during a 2-0 conquest. Esco’s first goal came from inside the box while the second was the result of a spectacular shot from 25 yards out off the foot of talented striker Lissette Bahena. 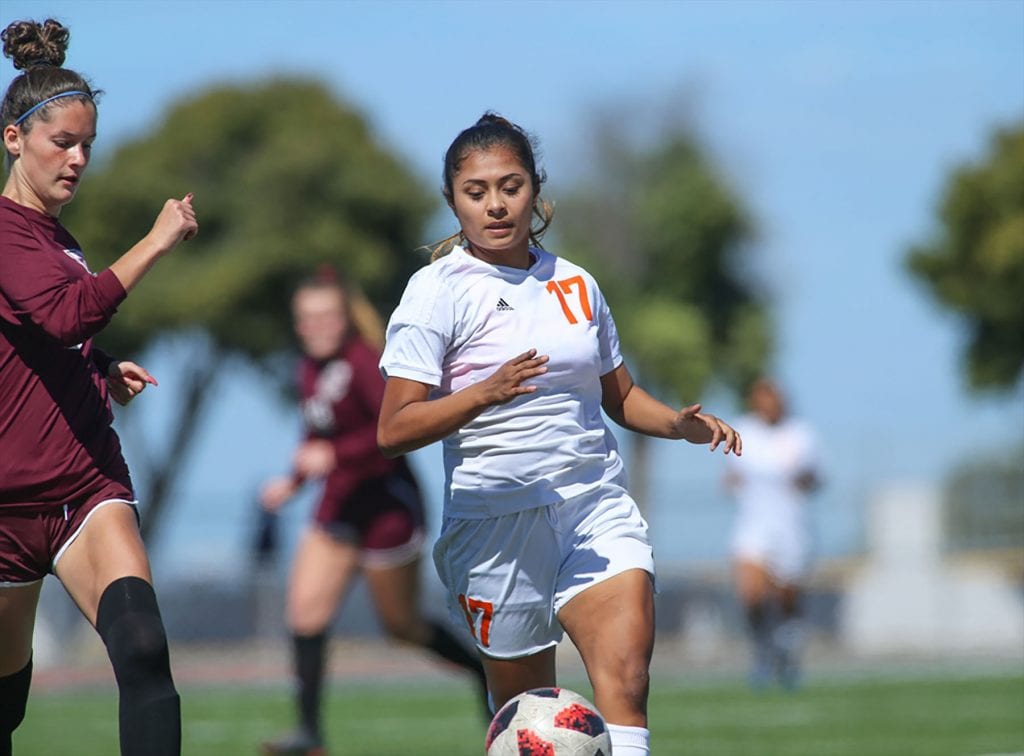 That led to a berth in the finals where the Cougars’ smothering defense once again rose up and held RBV scoreless through regulation and overtime, only to see Esco’s title hopes evaporate when the game eventually went to penalty kicks. There’s no denying that the narrowness of the loss made it a very tough pill to swallow, especially for the 32-year-old Cacioppo who had both played and coached at RBV. “I don’t mind admitting that game meant a lot to me,” reveals the coach.

Though every team member made a legitimate contribution to the Esco cause, a core of seven stalwarts loomed the largest.

In the aforementioned Bahena, the Cougs had a speedy athlete who carried with her a confidence and work ethic that was conspicuous. A ball of energy who never seemed to stop, she was an offensive dynamo as evidenced by her 14 goals and seven assists. Bahena’s stature was also reflected by her selection as a second-team All-CIF performer.

As for who was the anchor of the defense, that distinction went to senior center back Alizia Martinez. A powerful, take-charge player who gallantly played through the pain of an ankle injury, Martinez was grit personified and was often all but impenetrable.

Another defender of note was sophomore Edith Gonzales who played well beyond her years. Sneaky fast, super vocal and not afraid to make her presence felt, Gonzales had a knack for doing the right thing. Particularly proficient at free kicks, Gonzales was nothing if not uber-efficient.

A freshman of renown turned out to be Madison Dougherty, who started as an outside back and really made the most of her opportunities. Stepping up to play at an exceedingly high level, the tallish Daugherty displayed plenty of defensive know-how as well as being an enviable target for free kicks. Based on how she delivered in her first year, Daugherty’s future should shine bright.

In her senior season, captain Anyssa Prieto proved to be a quick, gutsy competitor whose dependable play and rah-rah personality went a long way into helping to motivate her teammates. Prieto also experienced the supreme high of being a hero when she booted home the decider in Esco’s playoff win over Classical.

When it came to scoring threats, Amari Meza was definitely one of Esco’s best. A special player who potted seven goals, Meza had an obvious feel for the game when on the attack. There was also a versatility to Meza that manifested itself in numerous and telling ways.

And last but hardly least, there was junior Analyse Ramirez, a bona fide team leader who made a startling conversion. When Esco’s projected starting goalie went down with a torn ACL during tryouts, Cacioppo was truly in a dilemma as to where to turn. He opted to tab the versatile three-sport Ramirez (volleyball, soccer and track) for the role and it proved to be an inspired choice. Though she was an accomplished striker, Ramirez sacrificed her own individual interests and agreed to tend goal for the good of the team. Putting her considerable athleticism to use, Ramirez was a revelation for a team that registered 12 shutouts on the season, five of which Analyse posted in succession. “She just did an unbelievable job,” praises Cacioppo. “Really, it was pretty amazing.” As to where the multi-dimensional Ramirez might play next season is undetermined but wherever she finds herself, you know one thing for sure. She’ll be a winner.

Yes, Esco’s boys team got plenty of buzz and love during its terrific season but the girls are no less deserving of the same because each squad was responsible for returning Cougar soccer back to a place of prominence.

One response to “Esco girls’ soccer made its own mark”