Esco doubles its pleasure in 10-8 match win over VC 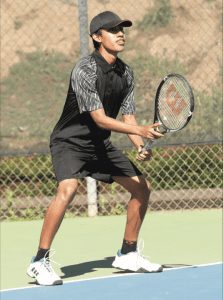 When the prep tennis teams of Escondido and Valley Center met on the courts at Adams Park last Thursday afternoon, each was hoping for a new beginning of sorts.

Since the non-league portion of their schedules hadn’t been particularly kind, both the Cougars (1-3) and Jaguars (2-5-1) were hoping to kick off Valley League play with a win that might change their future course and signify better things to come. Moreover, no one needed to be reminded that league matches generally carry more weight and meaning than those waged outside the circuit.

And though the Jags clearly gained the upper hand in the singles portion of the match, it was Esco’s doubles contingent that proved to be the difference in an eventual 10-8 Cougar victory.

The Cougs’ twosome dominance was reflected by the fact that coach Rigo Cisneros’s crew captured seven of the nine doubles sets that were contested. That was just enough to allow the visitors to overcome the sizeable advantage that the Jags had established with their notable efforts in singles.

Spearheading Esco’s surge to victory was the No.1 doubles team of Jesus Lopez and Adrian Rios, who after getting by VC’s top pair of Alex Stephens and Chris Le by a count of 6-4, then went on to blitz their next two opponents by scores of 6-1 and 6-1. While the lefty Lopez proved steady with consistent groundstrokes that offered nice depth and put opponents on the defensive, Rios made his mark at the net with numerous put-aways and volleys.

But Lopez and Rios weren’t the only Cougar tandem getting it done. Line 2 members D’Amonte Coleman and Jorge Soberanis were big-time factors as they lost nary a game in the two sets they captured. And the pair of Isaias Zea and Tyson Tran also won twice, getting it done with 6-3 and 6-1 successes.

The only VC duo who was able to show well was the combo of Stephens and Le. After their aforementioned first-set defeat, Stephens and Le found more of a rhythm and went on to persevere in 6-4 and 7-5 wins. A twosome that communicates well on the court, Stephens’s reliability in keeping the ball in play and Le’s angled volleys proved to be a winning formula for the most part. 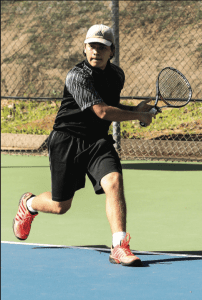 Esco’s top singles player Axel Cojulun was generally on his game as he won two of three sets in the victory over VC.

As for singles play, no one stood taller than VC senior Robert Parsons. Totally justifying his standing as the Jags’ top player, Parsons first took down Esco No. 1 Axel Cojulun in an intriguing match that finished 6-4. Thereafter Parsons continued to heat up and subsequently breezed over his next two Cougar foes 6-2, 6-0. On this afternoon, the talented Parsons had plenty working for him—including a high-octane serve, super efficient groundstrokes off both wings and the ability to exploit the opposition with precision shots. No one on either side was close to matching the highlevel of performance that Parsons produced.

The other Jaguar who shined in singles came out of the No. 3 hole in the person of Alex Archipov. The right-handed senior scored a pair of 6-2 wins – the most impressive of which came when he bested Esco’s dangerous but somewhat unpredictable No. 2 Milan Bujosevic. In that set, Archipov was admirably patient as he calmly waited out lengthy rallies until he could seize the moment with a put-away, overhead or nice touch shot.

And though the Jags were able to make some real headway when it came to singles that doesn’t mean they had it all their way in that department. Esco’s competitive yet composed Cojulun shook off his loss to Parsons and then rolled to 6-3 and 6-2 triumphs that were keyed by a very solid forehand.

The Cougars will soon find out if there is indeed any positive carryover from their victory over the Jags when they play host to San Pasqual in another VL confrontation. Another win there and it would be hard to argue that they haven’t found the new beginning they’ve been seeking.

As for the Jags, the reality is that this figured to be a challenging season knowing that coach Tom Helm’s group was returning only three players while the other roster spots were to be filled by a pair promoted from the junior varsity and a number of newcomers or virtual beginners. Those certainly aren’t the most ideal circumstances from which to operate but VC will nonetheless soldier on as it looks for a third match win of the season when it travels to Fallbrook.