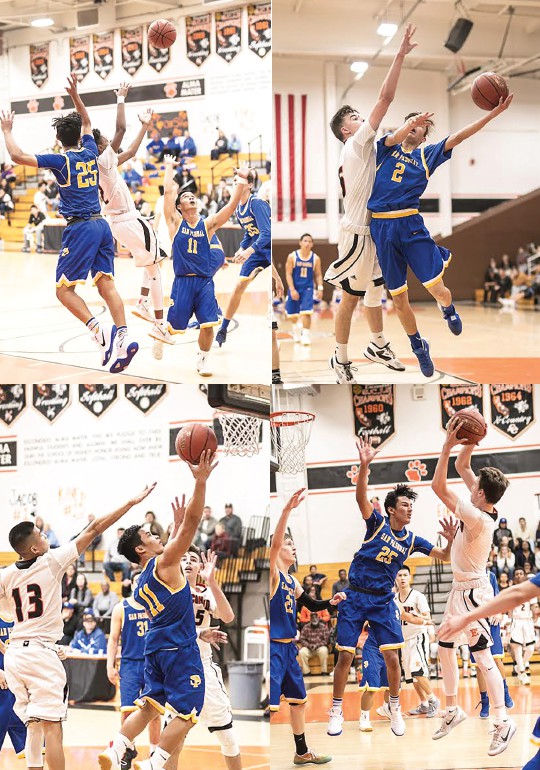 Top left: Cougar guard Jacob Hutchinson is sandwiched between two SP defenders as he awaits a rebound. Top right: G. Eagle Vern Fournier gets off a difficult left-handed shot while trying to avoid the block attempt of Cougar Ryan Green. Bottom left: SP’s Raymund Rodriguez was a standout all night long whether hitting treys or attacking the rim as shown here. The talented sophomore finished with a robust 28 points. Bottom right: Esco center Jacob Moskowitz rises up over Elijah Jackson before releasing a jumper in the lane. Moskowitz was the Cougars’ leading scorer with 24 points. Photos by Lenny Kerbs

Oh man, that was about as close as it could get! Near misses are rarely more heartbreaking.

Seeking that elusive first win in their final game of the 2016-17 season, the San Pasqual Eagles had a great shot, literally, of accomplishing that very goal.

Left wide open in the right corner with less than 35 seconds remaining and his team down by just two at 64- 62, SP forward Alex Southworth let fly with a high-arcing rainbow that looked awfully good as it rose majestically and then descended towards the basket. Moreover, it momentarily dropped deep inside the cylinder which only served to tantalize the G. Eagles and their animated fan contingent that had come to support them on a rainy Friday night at the Escondido High gym.

But alas, the ball, perhaps in keeping with some of the misfortune that has dogged SP throughout the campaign, eventually rattled in but agonizingly spilled out, there to be collected by Esco center Jacob Moskowitz — who was immediately fouled.

So instead of being up by one, with time winding down and a much coveted win within its grasp, SP was now forced to watch as the poised Moskowitz swished home one free throw and then popped in another which proved to be the decisive points in a riveting and entertaining 67-64 Cougar win.

G. Eagle guard Raymund Rodriguez, who put on a dazzling fourth-quarter show, did get off a desperate, last-second 3-point attempt but unlike Southworth’s try, it was under duress, wild and came nowhere near drawing iron.

By narrowly protecting their home court advantage, the Cougs, who were paced in scoring by Moskowitz (24 points), Jacob Hutchinson (13) and Wes Jones (11), improved their overall record to 9-16 but more importantly finished a very respectable second in the Valley League with an admirable 6-2 slate.

Meanwhile, despite playing without question its best and most complete game of the campaign, the specter of defeat still hovered over an SP team that never did taste victory in any of the 20 non-conference or eight league contests in which it participated. In this latest setback, the hustling Rodriguez was a standout with a terrific 28-point outburst while able teammates Southworth and Vern Fournier chipped in with 10 apiece.

In keeping with it being Senior Night for the host Cougars, Esco started a couple of players who hadn’t seen a whole lot of playing time but nonetheless had paid their dues, Eleazor Billones and Kaven Konda. It was nice to see these two deserving youngsters get some meaningful minutes.

The G. Eagles got off to a great 5-0 start when the 5-foot-6 but solidly built Rodriguez converted a steal into a hoop and then swished home a trey from the corner.

But the Cougs weren’t rattled and when guard Wes Jones drilled a magnificent trifecta while falling back into the SP bench, the score was knotted at 15 apiece at the end of eight minutes.

Early in the second stanza, Esco grabbed its first lead of the game when sleek Jacob Hutchinson scored on a nifty layup on which he delayed his release. Soon thereafter, pivot man Moskowitz, reached back and put in a difficult follow shot that padded the margin to four. But then SP went on an impressive 12-2 run which featured four free throws from Fournier and five points from Rodriguez that included a picturesque step-back 3-pointer.

However, the Cougs delivered a response of their own by tallying eight of the last ten points of the second period that tied the score 29-29 at the half. An aggressive attack of the rim by Hutchinson highlighted this run. Once he got to the hole, the flashy Esco guard executed a smooth underhand flip while drawing a foul. “Hutch” then matter-of-factly dropped in the charity toss to complete the 3-pt. play.

Though the Golden Eagles had performed gallantly in the first half, their prospects began looking dicey when the Cougars outscored them 9-0 in just 2:22 of the third period. Moskowitz was the ringleader of this push as he put in a chippie and finished off a fast break before adding a free throw to boot. Now with a solid 38-29 edge, Esco looked positioned to possibly break things open.

And yet the G. Eagles had no intention of going away, let alone disappearing. Gradually, they clawed their way back into the hunt and when Rodriguez knocked down a deep trey, the spread had been reduced to just one. But a momentum killing three from Jones and an artful drive and scoop by Ryan Green provided the hosts with some breathing room (50- 44) entering the final quarter.

But above all else, the last eight minutes were to be in many ways a showcase for the brilliance of Rodriguez. First, he netted a beautiful fall away while on the move. Then, he demonstrated both his versatility and gumption when he rose above the sizeable Moskowitz for a sensational layup, all the while being fouled. His made free throw seemed almost a foregone conclusion.

Having clearly elevated his level to where he was in an undeniable zone, Rodriguez continued to amaze. Faking as if he was going to drive the lane on Moskowitz, he got the Esco defender back on his heels before adroitly stepping back and draining as sweet a shot as you’ll see. The SP fans were literally roaring over this latest example of Rodriguez’s heroics that brought his squad to within a whisper at 52-51.

From there, the proceedings took on a frenetic pace. For starters, the deft shooting Jones, who seems to make a habit out of hitting big-time shots, buried a 3. Hutchinson followed with an assertive layup. SP’s Fournier answered with a clutch trifecta that kept his team within contact. Moskowitz was next to be heard from as he scored from in close before Southworth countered with a bucket of his own.

Then Moskowitz, whose extensive shooting range can stretch a defense, seemingly put the game out of reach when he gathered himself before stroking a straightaway trey that upped Esco’s lead to 62-57. Done deal, right? Wrong, not by a long shot because once more Rodriguez had the crowd in a tizzy when he replied with another of one his bombs.

But Moskowitz, who scored a crucial nine points down the stretch, refused to let up and after getting in low, kissed one off the glass. It was then left for Fournier to convert both ends of a huge 1 and 1 that made the count a nail-biting 64-62 and set the stage for Southworth’s dramatic near miss and Esco’s eventual triumph.

The Cougars now move onto the postseason with a modest two-game winning streak and some legitimate momentum working in their favor. Seeded No. 14 in Division I, the Cougars will travel south for a Wednesday night tilt against host Mission Bay, the No. 3 seed.

Yes, the Buccaneers (18-10) will present a formidable challenge but the Cougs can be a dangerous team, capable of hanging with just about anybody if they can play to their potential. With bona fide and versatile talents like Moskowitz, Hutchinson and Jones leading the charge, Esco won’t be an easy out and could very well spring what would be considered a significant upset.

Don’t be at all surprised if the Cougars do some real damage in the playoffs.

As for San Pasqual, dreams of playing in the postseason will have to wait for another time. When new but accomplished coach Ryan Schmidt took over the reins of the struggling SP program last summer, he knew that it would be a challenging road paved with growing pains. But from the start, one thing he guaranteed was that his G. Eagles would play hard and with real commitment. And as they demonstrated during a gutsy effort last Friday night, they certainly have upheld that end of the bargain.