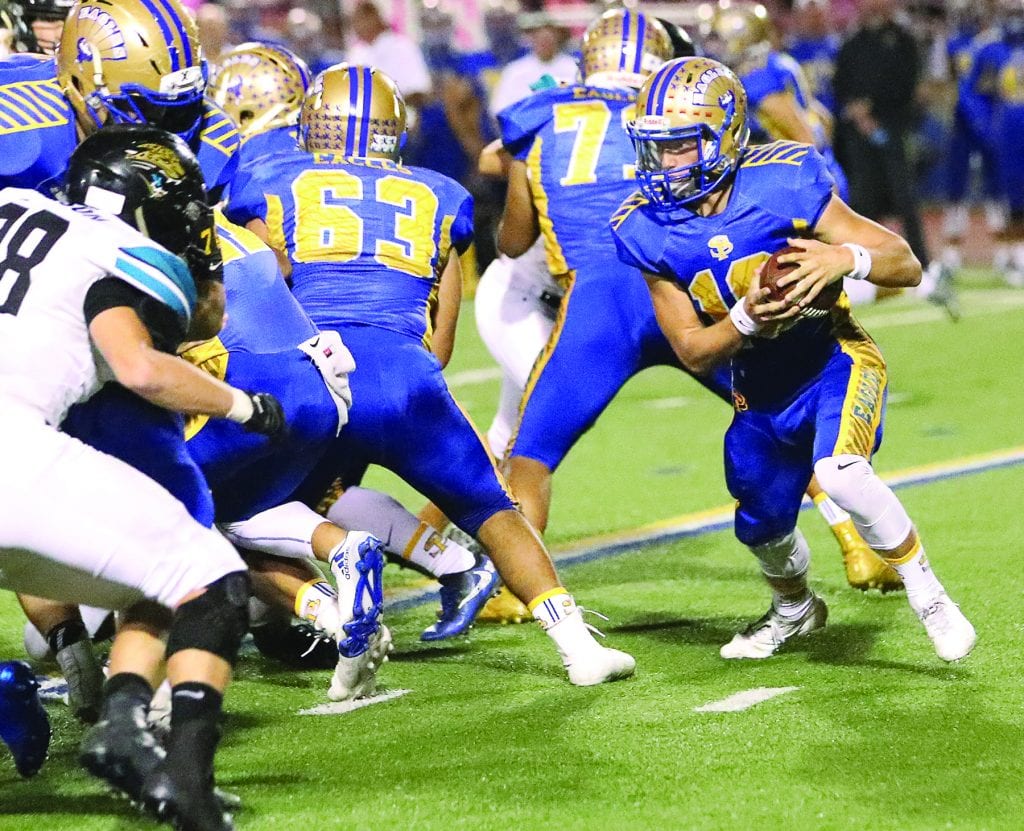 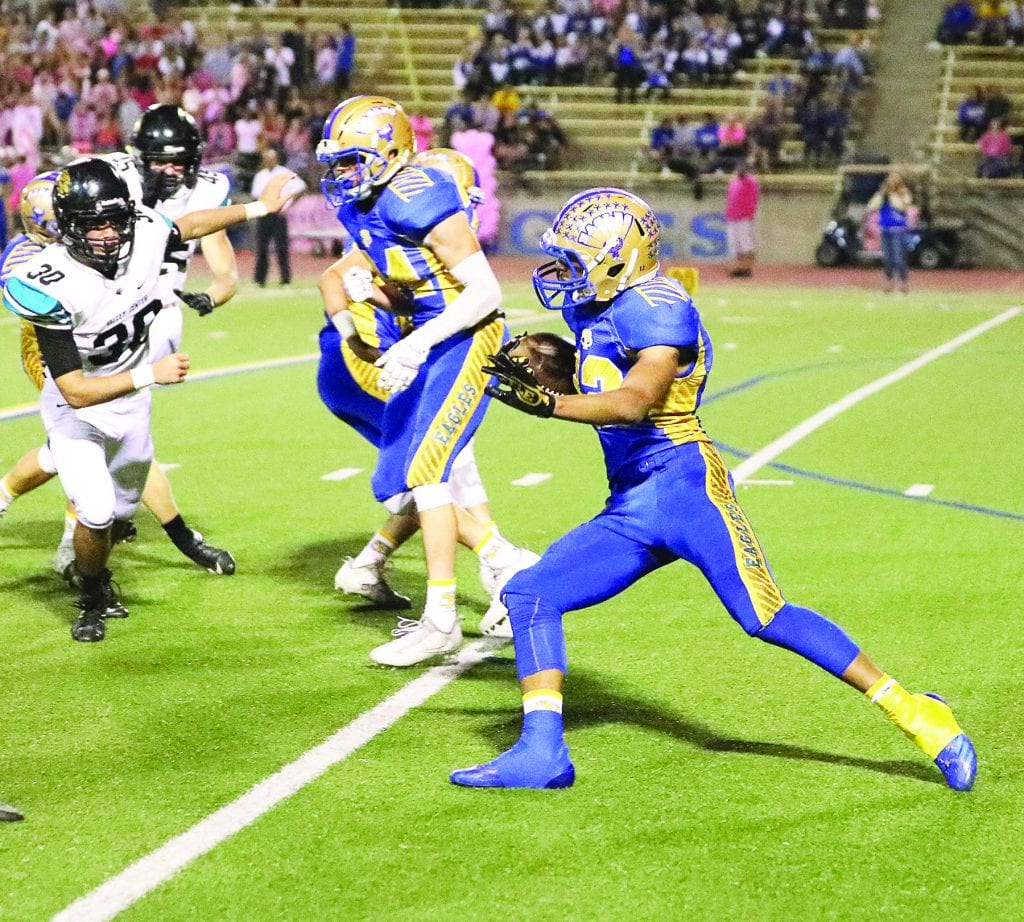 Both quarterback Westin Erdnman (left) and running back Shawn Carter were instrumental in San Pasqual’s 30-13 victory over Escondido. Photos by Lenny Kerbs

In a game between cross-town football rivals San Pasqual and Escondido that would determine city supremacy, Golden Eagle quarterback Westin Erdman proved to be a difference-maker by utilizing various parts of his anatomy – namely his arm, feet and leg, not to mention his head.

By the time his evening’s work was done last Friday night at Esco’s Ralph Wilson Stadium, the SP senior had tossed for a pair of dandy touchdowns, run for a score, kicked a field goal and made plenty of savvy decisions while operating the read-option.

So if you put all of that together in conjunction with sound contributions from a host of his teammates, what you’re left with was a significant 30-13 victory by the visitors. Based upon their notable performance, the Golden Eagles had deservedly earned bragging rights over their nearby neighbor, at least until these two teams go at it again sometime next season.

With this important win, the Golden Eagles concluded their regular season with a solid 6-4 overall record which also included a second-place finish (3-1) in the Valley (League). For the Cougars (4-6, 1-3), they missed out on a chance to get to the .500 mark which would have represented a huge upgrade from their two-win total of 2016.

Give Coach Jud Bordman plaudits for being aggressive right from the outset when he had his team attempt an onside kick but when it skittered out of bounds, that gave Erdman and crew primo field position and the G. Eagles were quick take advantage. Six plays and 39 yards later, SP was faced with a third down from Esco’s 8-yard line. From there, Erdman executed a deft ball fake that froze the Coug defense which enabled running back Brett Sayers to get free in the end zone. Erdmann then lofted a beautiful touch pass that Sayers pinpointed and just like that, the visitors were up 6-0 with just over three minutes having been played.

But to their credit, the Cougars came right back and responded with an impressive 76-yard march. Clutch third-down receptions by Shawn Moskowitz and Jake Frankfather kept the drive alive and then a 23-yard burst by Frankfather really had the Cougs in business. And then from the 11-yard line, the athletic and hard running Frankfather bounced off a would-be tackler and kept his legs churning before he surged into the end zone. Soon after, a successful PAT put Esco on top by a 7-6 count.

And that’s the way the score remained until late in the second quarter when SP would seize the lead for good. Operating from the Esco 30-yard line, Erdmann rolled to his right and did a masterful job of buying time. He then spotted receiver Conor Davis who was moving laterally across the end zone and with a nifty throw on the run, the QB found his target for another TD strike. Unlike his initial attempt, this time Erdmann was able to tack on the extra point and at  intermission, the G. Eagles were holding onto a 13-7 margin.

For all intents and purposes, the outcome of the game swung on the first possession after halftime. Taking a handoff from the SP 49-yard line, the talented Frankfather neatly slipped a tackle and made a swift cut toward the left sideline before he was finally brought down a yard short of paydirt. With the home crowd roaring its approval, it appeared as if the Cougs were moments away from tying things up. But alas, a holding call wiped out Frankfather’s heroics and this possession eventually sputtered and died.

This unfortunate turn of events clearly deflated the Cougars and sure enough, the G. Eagles were quick to pounce. A productive 20-yard Erdmann keeper, followed by a chain-moving surge up the gut from Saud Carillo set the table for SP. From there it was the smooth Shawn Carter who got the call. Taking an inside handoff and after finding a gaping hole at the line of scrimmage, the junior running back made a sweet move to his left. And just like that he was all by his lonesome en route to a 27-yard scoring sprint. This touchdown proved pivotal and indicated a definite swing in momentum in favor of the Golden Eagles.

Erdmann would later extend the SP margin to 23-7 early in the final stanza when he toed through a 27-yard field goal. And he would then put a bow on the SP scoring with a 5-yard scamper around right end that culminated a lengthy 87-yard march.

But Escondido still had some fight, not to mention one more thrill left in it. And it came as no surprise that it was Frankfather who made Esco’s final statement. Accepting a handoff at his own 24-yard line, the ascending senior got outside and hustled down the left side before he made a nice read and dramatically cut all the way across the grain. Showing plenty of speed, he easily distanced himself from his pursuers on the way to a monumental 76-yard touchdown tote. Yes, this run wouldn’t alter the ultimate outcome but it definitely was one to remember.

This intercity victory should provide San Pasqual with a nice boost in confidence as it heads into the Division III playoffs. By virtue of their No. 3 seed, the Golden Eagles earned a first-round bye and will play host to the winner of the Santana/Rancho Buena Vista matchup on November 17th.  Should form prevail, SP would again take on the Longhorns whom the G. Eagles dominated in a 48-6 conquest just two weeks ago.

And it could be persuasively argued that as of right now, the Golden Eagles might be playing their very best football of the season. Against the Cougs, the offense was crisp and productive with its misdirection plays and read option reaping significant results.

What’s more, Erdman appears to be on top of his game, fully capable of doing damage either through the air or when he elects to keep it himself. The running back trio of Carillo, Carter and Sayers offers a nice blend of power, elusiveness and productivity that has the potential to trouble any defense. And Davis along with fellow senior wideout Cameron Young provides Erdman with a pair of sure-handed and reliable weapons.

And the SP defense appears to be coming on strong as well with inside linebacker Johnny Vega and defensive end Tim Hansen really making their presence felt.

As for the Cougars, they will also find themselves participating in Division III playoff action as an 8th-seed beginning this coming Friday night at home when they will take on Mount Miguel (4-6) in a first-round clash.

And despite the loss to SP, there were a lot of encouraging signs that manifested themselves and    could bode well for the Cougs in the postseason. The determined Frankfather has clearly proven that he can be a featured back and don’t forget about prolific runner Kevin Rodriguez if he’s available for full-time duty.

Freshman signal-caller Robert Ramos has made significant strides as the year has evolved and now throws the ball with much more conviction, accuracy and purpose. And he has a highly promising target in young receiver Victor Seneres who can get open and add meaningful yards after the catch.

And on the other side of the ball, the defense showcases a flat out stud in linebacker Quinton Gaudet while the 6’3” Lance DeSorbo is a bona fide impact player on the defensive line. Secondary standout Moskowitz is another defender who can make real contributions and get it done.

So based on the positives, don’t be at all surprised if both the G. Eagles (in particular) and the Cougs make some genuine noise as the playoffs unfold.

But for now, this much is certain. When it comes to Escondido prep football, the Golden Eagles most assuredly rule the roost.